It’s winter in 1901 and everyone even tangentially connected to The Knick has just one thing in common: they’re all miserable. At least, that’s what I gather from the letter the lovelorn Nurse Lucy Elkins is writing to Dr. John Thackery. However, we don’t know that he’s actually getting his letters because he’s too busy performing gruesome DIY nose jobs in exchange for extra vials of heroin, the drug prescribed to treat his coke addiction, while locked away in the asylum. God bless the turn of the century Gregory House for finding an angle to work even nursing giant sores on his lips and surrounded by patients doing the thorazine shuffle. I mean, we can all safely assume the last person in the world he is thinking about is Lucy, right? You know who is thinking of her, even though he’s desperately trying not to? Dr. Bertie Chickering, who is still reeling from her rejection of him. The usually likable young doctor broods through the surgeries she is tasked to assist. If he were born a century later, he’d be on Reddit posting whiney memes about being in “the friend zone.”

Handsome racist shitbag Dr. Everett Gallinger’s life is in shambles, although it’s hard to feel bad for that guy. It’s easier to feel bad for his baby-murdering wife who is fresh out of the looney bin minus all of her teeth. Gallinger just weakly smiles and looks on as his shell of his wife selects replacement teeth culled from corpses, as presented to her by an old-timey Todd Barry. Fortunately, his wife’s pretty young sister is there to help out, and she has all of her teeth. If Gallinger seems emotionally distant around his wife, well, that’s because he’s apparently saving his efforts to rescue Thackery from his own addiction. He can only care about one person at a time, apparently. Well, there’s that and the fact that restoring the addict to his former glory means that he won’t have to take orders from a black chief of surgery.

However, Gallinger’s approach to detox is rather inspired in that it involves kidnapping and tying up a man while sailing him out to the middle of the Atlantic. While they’re out there, Gallinger makes Thackery earn his Boy Scout badges in knot tying and sobriety. It also gives him plenty of time to hallucinate the young patient he lost during a botched blood transfusion last year. Gallinger comes across as likable and almost heroic in his tough love efforts to clean up Thackery’s mess of a life. However, we’re sure it won’t be long before the blonde garbage monster pisses away the viewers’ good will.

Thackery isn’t the only one worse for wear. Dr. Algernon Edwards may have an ally in Cornelia’s brother Henry when it comes to getting The Knick’s reluctant and hostile board to recognize him as chief of surgery. However, Edwards is suffering from a detached retina thanks to his penchant for street brawls. the injury is clearly taking its toll as he is passing off surgeries to less experienced and less competent doctors because he can’t see into patients’ darkened body cavities when they’re cut open. Given how this Steven Soderbergh really relishes filming gore, and in some ways, is filling the visceral void that the now canceled Hannibal left behind, we’re treated to the drainage of a monster cyst not unlike the myriad Dr. Sandra Lee videos circulating the internet. For those that don’t know, Dr. Lee has a cult following of hundreds of thousands of fans that like to watch her videos of popping patients’ blackheads and draining their cysts. At The Knick, poor Bertie isn’t handling this giant pus bubble with as much grace as Dr. Lee, and his partner, Dr. Mays, is damn near useless.

If that wasn’t bad enough for Edwards, his former paramour Cornelia was lured back to New York from San Francisco by her lecherous father in law, who used the old, I’m-building-you-an-11-bedroom-apartment-no-just-kidding-it’s-not-done-yet switcheroo to keep her under his roof. Man, if I had a dollar for every time I fell for the old 11-bedroom apartment con.

Sister Harriet, arguably has the worst go of it out of everyone at the moment, what with being locked away in jail awaiting trial for the myriad abortions she helped women obtain. Although this is set over 100 years ago, the scorn she faces from the Mother Superior does encapsulate some of the prevailing attitudes of people who currently oppose reproductive rights. Despite her miserable situation, the former nun is keeping mum on naming her accomplice Tom Cleary. He’s determined to clear her good name and get her out of jail with the help of a high-priced lawyer he plans to fund with the fancy motorcar he bought to serve as The Knick’s ambulance and his income managing an underground wrestler. You know what they God does every time someone makes a plan, right?

The only person that seems to enter this episode with a little spring in his step is Barrow, who is helming what should be the hospital’s move uptown and in proximity to a more upscale clientele. Naturally, he worked out a kickback situation between himself and the contractors. Of course, he’s still beholden to his new creditor Ping Wu, who demands to use The Knick as a free clinic for his sex workers. Barrow isn’t in a position to say no, but he does bargain down a reduction in debt for each woman serviced. In no time, he’ll be slithering up a brothel’s steps and crying into a prostitute’s bosom over how clearly in over his head he’s in.

Oh, and it looks like plague is coming in to the city via Ellis Island. That should work out well for everyone. 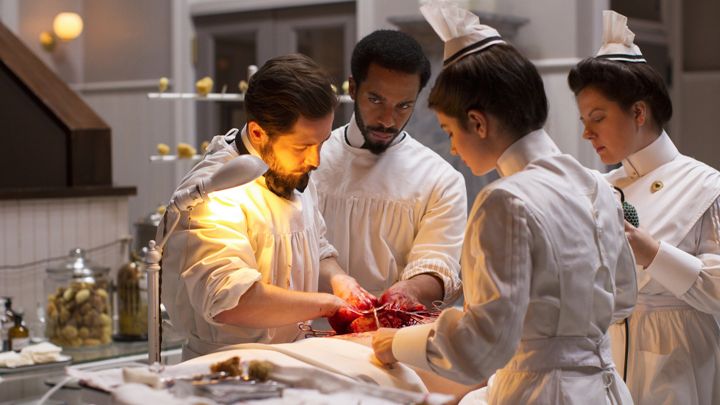