Giant cardboard sunflowers, brightly painted banners and costumes of all shape and size dotted the streets of Midtown Manhattan on Wednesday, in an attention grabbing display of climate-centric outrage. People’s Climate, the organization behind the 400,000 person protest that marched down Sixth Avenue last September, intends for October 14th to serve as a nation-wide Day of Action, with their 12 p.m. demonstration in front of Chase Bank’s Park Avenue location amounting to just one in a number of diverse (and dispersed) movements.

The Day of Action, while conceived from an environmental perspective, confronts a range of issues, from contemporary art to superstorms, along with overarching concerns on housing rights and income inequality. Each mini-protest is part of a wider build up to a second mass march planned for November, set to coincide with important United Nations climate negotiations in Paris. Today’s Day of Action culminated in a move to the Harlem State Office Building. There, protestors, workers, laborers and concerned citizens can gather to discuss the role of community in combating the issues facing their community—both global and local.

Eddie Batista, executive director of the New York City Environmental Justice Alliance, said of Midtown: “This is what’s known as a target-rich environment.” Walking to his second protest of the day, this time against Blackstone, a real estate company located several blocks north of Chase Bank, the Observer asked Mr. Batista if his goals could be summed up by asking big banks to divest from fossil fuels. “Absolutely,” he replied, “but it’s broader than that. When it comes to intersectionality in racial and climate justice, we’re hoping that [today’s actions] continue to represent the breadth of the movement.” When considering that complications from climate change disproportionately affect poverty-stricken areas, the nebulous nature of the days protests begin to take shape.

“All these issues are connected,” Robert Robinson of the Right to the City Alliance added to that same point of intersectionality. “Land is at the crux of all the issues we’re dealing with here,” he added, whether those occupying it are losing it to pollution or foreclosure. Mr. Robinson attempted to meet with the heads of Blackstone, planning to offer a list of demands revolving around the city’s housing and foreclosure crisis, but was turned away. Still, he encouraged protestors to reach out on social media as a way to keep momentum going. “We will be back,” he concluded, as the crowd cheered.

Jean Sassine, a protestor who attended both the Chase Bank and Blackstone actions, expressed frustrations towards each company. “Just as they suck the life out of my community financially, they’re a bad player in the environment—heavily investing in fossil fuels and helping in the mass incarceration of my neighbors,” Ms. Sassine, who lives in South East Queens, told the Observer.

Still, despite the heaviness of the subject matter at hand, some protestors looked towards the positive. Marni Halasa and Elliot Crown, two performance artists, felt that today was of particular importance in coming out and fighting for a difference. “We do a lot of protesting weekly, but we were especially inspired by the debate last night, given that this is about affordable housing, too.” Their costumes, each handmade by Elliot, a puppeteer, were picked out just for the occasion.

“We already had these laying around,” Mr. Crown said of the head-pieces and props. “But the silencer,” he said, pointing to a sculpted tube with the Chase Bank logo printed on the side, “that’s new.” 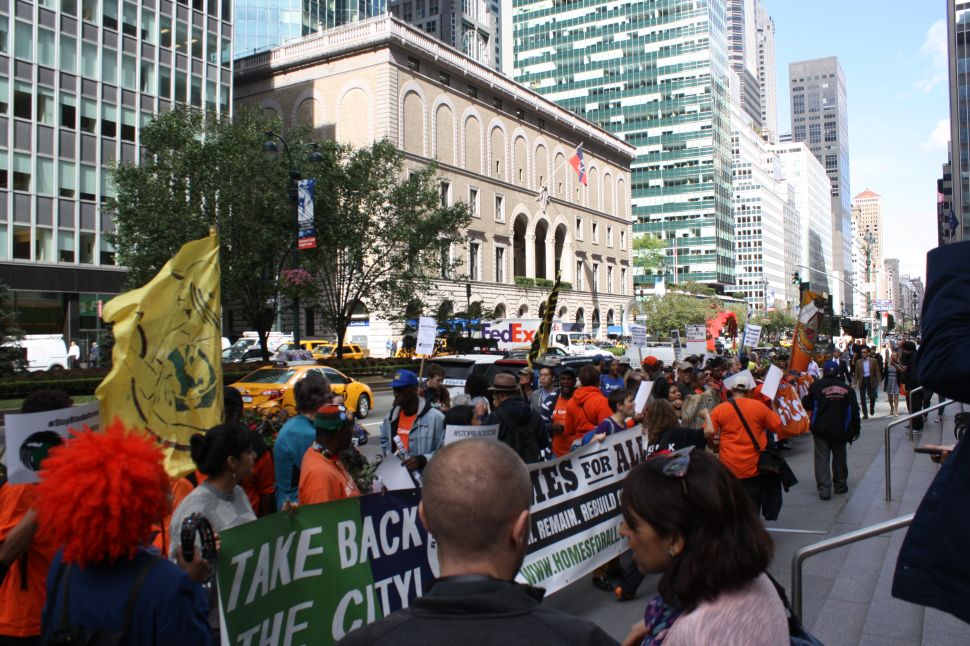