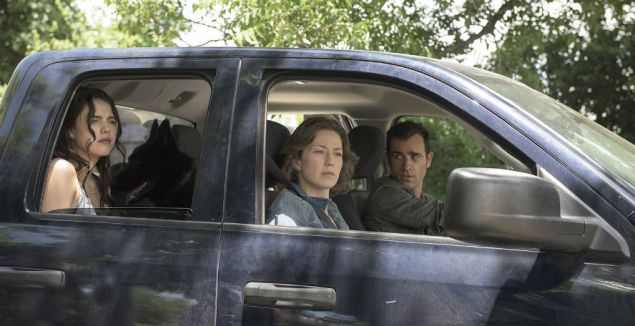 “If you kids don’t shut up I’ll depart this car right around, so help me God.” (HBO)

After last weeks introduction to the Murphy family and the town of Jarden, Texas—which this episode kind of explains is either wrapped up within or bordering Miracle National Park, it’s still kind of confusing—this week we shoot back a couple months to revisit the final moments of season one, which saw Nora Durst discovering baby Lily on Kevin’s doorstep just as he has Jill return soot-smeared and shell shocked by the riots that seemingly destroyed the Guilty Remnant.

Nora, Kevin, and Jill take the baby inside, and after Kevin confirms with the authorities that the kid hasn’t been reported missing he comes clean on the fact that he’s been sleepwalking, that he kidnapped Guilty Remnant leader Patty, her suicide, Nora’s brother Matt’s part in burying her body in the woods, and that he smokes cigarettes. It’s hard to tell if he feels one-upped or not when Nora admits that she hires prostitutes to shoot her in the chest while she’s wearing body armor. Jill kind of laughingly questions whether she’s supposed to reveal some weird behavior next. Most likely somewhere in the world this is the first scene of The Leftovers that someone will ever see, and I would love to talk to that person, to gauge their reaction, and explain that what they just saw was the happiest and most heartwarming scene the show has presented thus far.

In addition to catching up with these season one regulars, tying up loose ends, and depicting their decision to move from New York to Jarden, this episode is concerned with the question of whether or not everyone is doing all right. Or, maybe if it’s possible to be all right, considering everything that’s happened. After the opening scene we skip ahead two months and find Kevin decidedly tense, late for the hearing to finalize he and Nora’s adoption of Lily, prone to suddenly becoming startled by a white shirt hanging on a rack at the Laundromat or even just some trees. At first he seems like he’s seeing things, and then it seems more like he’s afraid he’s being watched, and by the end of the episode it seems like it’s a little of both. After the adoption hearing, during which Kevin and Nora stubbornly insist that they’ll never separate, despite the fact that they’re not married, Kevin goes home and attempts to fix his washing machine in a manner that makes it seem a lot more like he’s trying to kill it, flashes on Patty’s death, and makes the sudden decision to go disinter her body.

Which certainly doesn’t make it seem like Kevin is doing that great, a point driven home by the fact that after digging up Patty’s body he hallucinates that she’s alive and speaking to him and then purposefully gets himself pulled over by a cop and readily reveals that he’s hauling a decomposing corpse in the bed of his truck. He’s arrested and then quickly released when it’s revealed that no one cares what happens to members of the Guilty Remnant.

In season one there were moments when Justin Theroux played Kevin as almost too intense, Kevin’s jittery, barely sublimated rage and sadness accentuated by Theroux’s widow’s peak, angular features, and general tweaker vibe to the point that spending time with the character was occasionally maybe a bit more unpleasant than anyone intended. It’s hard to tell after just one episode, but so far the material and Theroux’s performance seem to be a little more in synch this year, and throughout the episode Theroux does an outstanding job of conveying just how haunted and needy Kevin is without going too over the top.

While Kevin’s off digging up corpses, his daughter Jill has a secret meet-up with her brother Tommy, who apparently stayed in town after depositing Lily on his father’s doorstep and is keeping company with his mother. Tommy insists no one in the world is okay, Jill counters that she and her father and Nora are just fine. Jill takes a stab at getting Tommy to contact Kevin, which he shoots down, he tries to pass her a note from their mother, which she tears in half unread.

Cut to Nora, discovering that her former home, which she listed for sale at 600K, has received an 2.7 Million dollar offer from some MIT researchers investigating the Departure who consider her property anomalous in that the her two children and husband all vanished, leaving her behind. The researchers suggest to Nora that their hypothesis is that the answer to why some were blipped out of existence by departure and not others might be a matter of geography, and that their research could help save people from future departures. “You really think it’s going to happen again?” Nora asks, to which the head researcher replies, “Why wouldn’t it?”

Carrie Coon is so good, gang. Somehow she can shift from luminous to furious to heartbroken without really changing her expression, as if she can somehow adjust the light in her eyes without moving the muscles in her face. As Nora, she plays a great counter-point to Theroux’s Kevin—just as capable of an outburst or flailing, but much more internalized. Later in the episode, when she bids three million dollars on a home in Jarden, she plays the moment with so much optimistic exuberance that it takes a minute to realize that what she’s done is as desperate a move as anything Kevin’s ever pulled.

That moment comes later in the episode, I’ll get to it in a second. First, quickly, there’s a reunion between Kevin and his father, who claims to be cured of his insanity and later reveals that he stills hears voices and has decided to heed their instructions, which are to move to Australia and restart society. I want to see this storyline played out so hard that I’m tempted to start a Kickstarter to make it happen.

That night Kevin suggests the family move, and next thing we’re in Texas, winding through an encampment outside of town that looks like Burning Man with a world religion angle and through multiple layers of security. Kevin’s told he has to quarantine his dog for 60 days, is visited by another vision of Patty, and Nora buys that house, claiming later that it’s almost eerie that the house cost almost exactly what she got for selling her old home to MIT.

The thing is, the house didn’t cost almost the exact amount she got for her old one. She bought the house at auction, and bid $3 million against a high bid of closer to $1 million. She created her own eerie coincidence and packed it with meaning.

And this is nothing if not a show about packing things with meaning. I mean, it’s about the way people respond to a massive and unanswerable mystery, after all. Well, maybe not unanswerable if you ask those guys from MIT, who seem convinced they’re going to crack it, whose assertion that the answer involves geographical location is behind Nora’s desperation to build a home in a place notable for its lack of departures.

That Nora can plausibly convince herself that the universe is somehow behind her getting the Jarden house is representative of the way people organize narratives around their lives all the time, but carries an extra weight in the world of The Leftovers that I’d never totally considered before. Regardless of what was behind the great departure, these characters exist in a world where the physical laws that govern reality have been definitively proven flexible at best. So who’s to say, then, that the voices guiding Kevin’s father aren’t real, that the visions of Patty tormenting Kevin are less hallucination and more ghost (or something), that poor Eddie Winslow wasn’t really reading the future in finger paintings last week? The show has flirted with this idea in the past, but always with a sense of remove and deniability, it’ll be interesting if they dive in a little deeper this year.

Not that I want explanations or anything, ever. I mean, I get what the show is about.

Wait, I do want an explanation for one thing. By the end of this hour we revisit the Murphy family BBQ we saw last week, and afterwards (post argument and make-up sex) Kevin seems the most at peace we’ve seen him as he falls asleep only to awaken suddenly at the bottom of the very same recently drained riverbed we saw last week, a cinder block tied to his foot with a length of rope. I’ll need an explanation for that. Kevin scurries out of sight just as the Murphy men arrive in search of daughter Evie, and the episode ends on the same anguished howl from last week and a definite sense that things are not going to be okay and probably only going to get a lot worse. 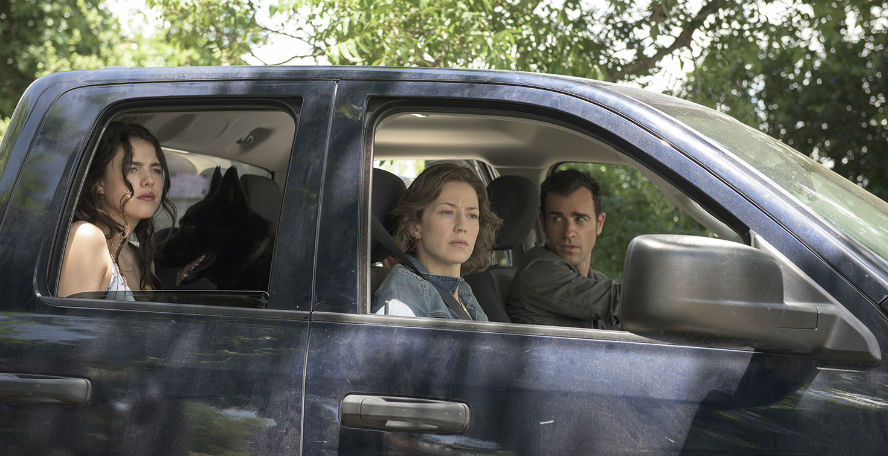