After two episodes of new characters and locations, both building to the same awesome cliffhanger, it’s a ballsy move to spend this hour focusing on Laurie, Tommy, and the current state of the Guilty Remnant, basically shorting the narrative drive the series has built so far in its second season to catch up with all of its more unpleasant elements.

Laurie and Tommy, mother and son reunited after their separate, miserable adventures last season, are running a kind of Guilty Remnant recovery group. Tommy’s falling back on his experience as a cult member to infiltrate GR cells and identify people who seem like they want out, Laurie’s housing these folks in a rented office (down the hall from a call center, where folks blather for a living, ha ha) and writing a book about her experience in the group.

Early in the episode we see Tommy, while undercover, ask an anguished Remnant (here forth to be known as The Saddest Blonde Woman in the World) if she’s okay, and as with last week this seems to the be question the show is posing of each character. This week it’s almost immediately evident that  Laurie and Tommy might be doing good work in helping GR members escape and reunite with their families (although that doesn’t turn out super well for The Saddest Blonde Woman in the World) but they are decidedly not doing well themselves. Between infiltrations Tommy is boozing and passing out to Youtube videos of his old boss, charismatic cult leader Holy Wayne, and Laurie’s resolve to help folks is undercut by the fact that she runs down some GR’s she spots in the road, later hinting this is something she does frequently, and the dawning sense that maybe she’s not as interested in saving people as she is in turning a war on the GR into the organizing principle of her life.

And okay, there’s your theme for the hour, and maybe the season so far, and maybe human history. If life is a big raging storm of mystery and tragedy, we either choose a port to shelter within or erect a new one. And sometimes we outgrow that port, or it turns out we’re shitty builders, and then what?

This is a tough, if compelling, hour. Laurie and Tommy and the most anguished and screwed up people in a show where a woman hires prostitute to shoot her in the bullet proof vest so she can approximate the experience of death. And it’s never quite clear what the creators of the series want us to think of the Guilty Remnant.

Maybe that’s not what I mean, maybe I shouldn’t worry about what the creators want me to think. Maybe I just have a hard time figuring out what the GR is doing here. Narratively they’re villainous, mostly, drab and spooky and fascistic and unflinchingly awful. They hound The Saddest Blonde Woman in the World to death, and when Tommy is finally caught trying to liberate members they tie him up in a laundry van, have Meg (Liv Tyler is back, and Meg is as all in on the group now as Laurie is opposed, I guess) rape him and then threaten to burn him alive.

Thematically it’s hard to see where they fit, too. New members are instructed that their pain is meaningless, but their whole deal seems to be making sure everyone feels as much pain as possible, all the time. If this is all about ports in storms, the port offered by the GR seems to be a particularly shitty one.

Laurie’s meeting with her perspective publisher towards the end of the episode sheds an interesting and complicating light on the GR’s place in the show. The publisher makes it clear that the world at large views them as kooky and laughable. When he asks about the origins of the constant smoking, Laurie is kind of baffled—she doesn’t know why they smoke, no one told her.\

As a port in a storm, if we can keep that going, the GR seem a particularly miserable choice. Their deal seems very in line with the way an angst-ridden, mopey teenager deals with hurt feelings, by inhabiting those feelings completely and making sure that if they’re not happy, no one is. They have no doctrine, no explanation for why they do the things they do, but here’s the complication—it seems to work. After a couple infiltrations, Tommy claims the GR seem to have something to offer. Laurie admits to her publisher—when he points out the kind of lack of emotion in her manuscript–that she has little memory of the entire experience.

Anyway it’s pretty clear that Laurie isn’t really as mad at the GR as she is distracting herself by raging at them when the publisher runs down her entire character arc from season one in like 20 seconds and she responds by viciously attacking him. I guess one thing that can happen when the port you’re seeking shelter in turns out to suck is that your disappointment in that port becomes a shelter unto itself.

At the end of the episode Laurie realizes that for all their faults the GR is giving people comfort when all she can offer them is a return to lives they found unfulfilling in the first place (speaking of which, right before The Saddest Blonde Woman in the World steers her van into oncoming traffic and annihilates her entire family there’s a shot of her husband digging through a plastic shopping bag of snacks that for some reason struck me as the most desolate image I’ve ever encountered and made me doubt the viability of human society in the long term, which is either killer mis-en-scene or means I need to get laid). Laurie and Tommy hatch a plan to revive Holy Wayne’s spiel about healing hugs, and the episode ends on a fairly promising note, as these two running a cult in order to save people from a cult can only lead to some interesting television.

Amy Brenneman is great throughout this episode, nailing the emotional volatility of a woman who is really more heap of wreckage than seaworthy vessel. 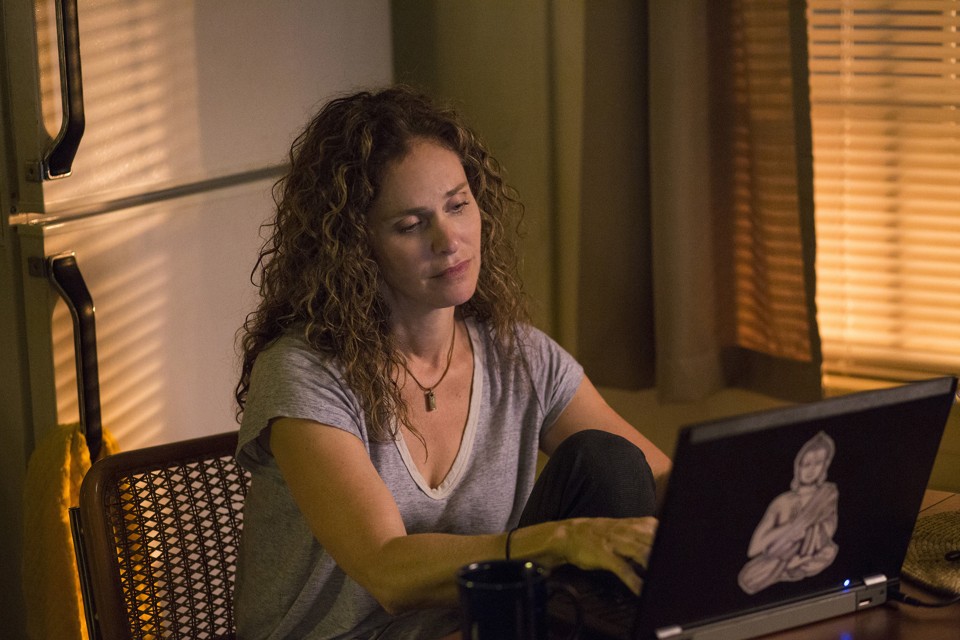