In what can only be described as an expression against one man’s impressions, Boston-area dissenters with ample amounts of spare time coordinated a diminutive rally outside the Museum of Fine Arts in Boston yesterday.

Organized by Northeastern University law student and activist Max Geller, the small group consisted of a dozen or so people waving ironically artless signs that said, ”God Hates Renoir,” “Aesthetic Terrorism” and “ReNOir,” according to The Boston Globe.

The group was demanding no less than complete removal of all works by Pierre-Auguste Renoir from the walls of the MFA. The museums owns many works by Renoir, including the quite famous Dance at Bougival, 1883.

While most participants took a lighthearted approach to Renoir boycott, Mr. Geller has been adamant in fight against the late French Impressionist, creating a “hate account” on Instagram in honor of the master painter and an online petition for the National Gallery in Washington, D.C., to remove their Renoirs (the petition was archived because it did not meet signature requirements).

Mr. Geller’s complaints against the artist include improper proportions, garish colors and the age-old accusation of being unable to properly model hands and fingers. “Treacle Harms Society!” one angry placard read. 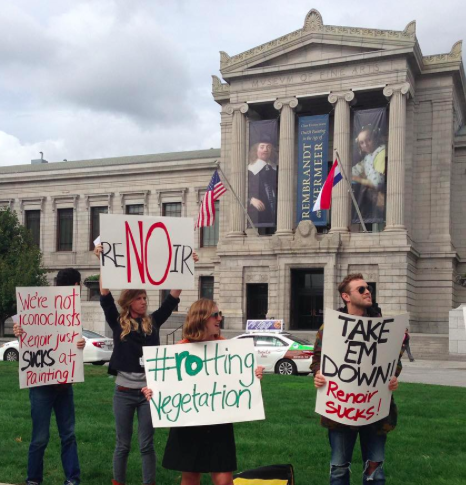