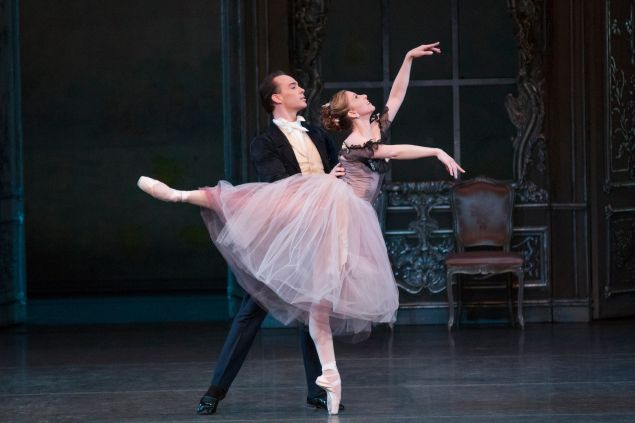 The final performance of City Ballet’s fall season, on Sunday afternoon at the Koch, was a reprise of the Balanchine “black-and-white” program that has proved so popular these past years: Concerto Barocco, Monumentum/Movements, Episodes, The Four Temperaments, the first and last of which are towering achievements, among the very greatest of the 20th century. If the company can’t do justice to these works, it’s not fulfilling its obligations, either to today’s audiences or to history. So how are they faring?

On Sunday there was a lot of new casting, some of which was underpowered, some of which was very promising. But none of which really affected Barocco, which depends on its two ballerinas and on the overall approach to Bach’s music (his Double Violin Concerto in D Minor) and Balanchine’s intentions. Yet again we had Teresa Reichlen as the lead “violin” and Sara Mearns as her vis-à-vis, an ill-matched pair due not only to the disparity in height—the “Mutt and Jeff” syndrome—but to their different styles of dancing, Reichlen all cool, Mearns all hot: at times they’ve seemed as if they were dancing in different ballets. On Sunday they were more in tune with each other, possibly because Mearns, unusually, seemed more focused on the music than on herself. But this serious and accurate version of Barocco, handsomely danced by the eight corps girls (so crucial to the ballet) and Russell Janzen as the single male, suffers from joylessness. In its youth Barrocco was light, jazzy; today it knows it’s a masterpiece.

The beautiful Rebecca Krohn danced the leads in those two Stravinsky pieces that are always performed together: Monumentum pro Gesualdo and Movements for Piano and Orchestra. This is Diana Adams, Suzanne Farrell, Gelsey Kirkland territory, and although Krohn is finally beginning to bring something to her dancing beyond her remarkable body and legs, she’s just beginning. Ask la Cour, who’s turned into a real asset, supported her with elegance and grace, but “M and M,” as they’re affectionately referred to, have seen better days.

It was gratifying to see debuts in Episodes: Lauren King, in particular, danced with charm and authority in the opening “Symphony.” Claire Kretzchmar, who’s taken a long time to emerge from the corps, was effective in the “Five Pieces.” And the talented Ashly Isaacs did justice to the “Concerto.” These three sections astonished the audience at the premiere in 1959—I remember gasping at their daring, and the fascination of Webern’s music. Today they’re part of the language—yet as modern as anything that’s come along since. Mearns was at her restrained best in the ravishingly beautiful “Ricercata.” But this wonderful ballet loses much of its charge when it omits the astounding solo that Balanchine made for Paul Taylor. Other companies are restoring it; why not Balanchine’s own?

Then the test of tests: The Four Temperaments, a work that’s come in and out of focus since 1946, when it was created. The three “themes” were securely danced. Anthony Huxley gave a careful and honest performance of “Melancholic,” but far—very far—from the anguished experience that Bart Cook provided for so many years. This section is about the miasma of depression; it’s not enough to give us an unhappy young man with a pliant back. I had hopes that Tiler Peck, in a debut, would bring “Sanguinic” back to its full stature, and no doubt she will. Her dancing was impeccable, as always, but I don’t feel she yet has the implacable thrust that the role demands, and a single performance on the last day of the season isn’t going to give it to her. She’d better hurry up: “Sanguinic” is an endangered species. Amar Ramasar, the “Phlegmatic,” wasn’t very phlegmatic, but he danced strongly and intelligently. Megan LeCrone was appropriately cast as “Choleric,” and suggested that there really might be a place for her in the company. To sum up: Four T’s is alive, but not exactly thriving. It has to be fierce, and blandness is creeping in.

For many Balanchine lovers, the great event of the season was Liebeslieber Walzer, and the great sadness was the farewell performance of Jennie Somogyi. She was by far the finest thing in it—dramatic, moving, heart-piercing. Somgyi has had a career blasted by desperate injuries, and it had taken too long before Peter Martins situated her in her destined role: as successor to Kyra Nichols. But you could tell from the loving appreciation she received at this touching farewell how deeply appreciated she’s been by a knowledgeable (and sizable) part of the audience. Liebeslieber as a whole was also underpowered and under-imagined. At its best, it seems to project all of human experience; at the moment it’s about eight handsome people waltzing charmingly.

Surely the company has no one like Somogyi for certain classic roles—except Tiler Peck, who demonstrated her astounding musicality and command yet again in Theme and Variations, the final section of Balanchine’s Tchaikovksy Suite No. 3. Theme is built on one of Balanchine’s most exposed and demanding ballerina roles, but Peck sails through it as if no one ever told her it was hard: her technique is so strong that she can do anything faster and more securely than is absolutely necessary, leaving her free to play with the music at her will, yet always with judgment and exquisite taste. And Andrew Veyette rose to the occasion as her male equivalent. He’s a handsome, hard-working dancer—not a bravura performer, but a brave and responsible one: he doesn’t duck the frightening series of double turns and drops to the knee that have terrified untold male principals through the decades. Classical male dancers are a rarity at City Ballet, and we should be grateful for him.

But to show how cuckoo the company can be: the first performances of Theme this season were given to Megan Fairchild, just back from the Broadway revival of On the Town. Fairchild is well-trained and strong, but you’d have to go far to find someone less suited to this role. She’s a miniature soubrette, not a classical ballerina. It’s not just that she’s small, with small feet, but that she dances small. Yes, she does the steps cleanly and accurately, but she has no amplitude, no command, no grandeur—all essential qualities for this sublime offspring of The Sleeping Beauty. Casting like this does no honor to the ballet, to Balanchine, or to Fairchild herself. Peter Martins rushed her to the top, pushing her into roles she wasn’t experienced enough to handle, and she’s bravely worked hard to catch up. She has a secure and useful place in the company, unlike other Martins mysteries like Abi Stafford and Ana Sophia Scheller, but this is ridiculous. 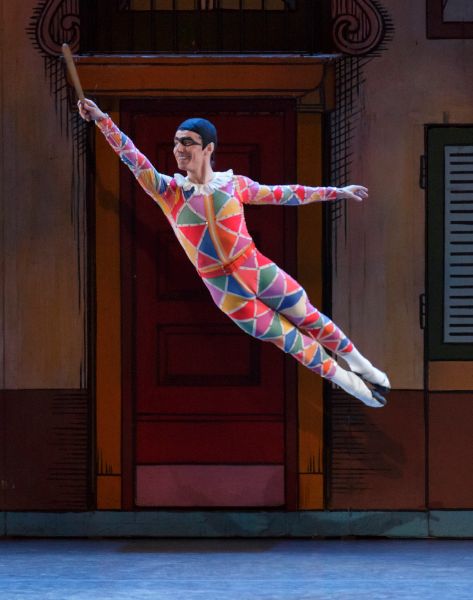 Tiler Peck was also enchanting in the current revival of Balanchine’s two-act Harlequinade, a ballet audiences have always had difficulties with. (Balanchine had them too: When the one-act version didn’t really succeed, he added the second act, with its bounteous waves of children from the School of American Ballet.) The basic problem is that audiences expect another romantic comedy like Coppélia, but Harlequinade has the near-cruelty and edge of commedia dell’arte. (Patty McBride was the original ballerina in both, which probably added to the confusion.) Peck as Columbine was superb—she always is superb in Mc Bride roles— and Joaquin De Luz was at his best immaculate bravura self as Harlequin. Daniel Ulbricht was exactly right as Pierrot—sly, humorous and touching. He’s beginning to demonstrate that he’s an artist, not just a brilliant master of schtick. It’s great to have Harlequinade back.

But less great to have Jerome Robbins’ New York Export: Opus Jazz back. This piece, made a year after West Side Story and in the same mold—maybe even set on the same street corner—seemed retro to me even back then when it was made: Robbins showing he was hip. Here are all the usual Robbins kids in their casual street clothes, showing off, squaring off. (No fatalities this time, though.) The piece was made for Robbins’ touring company, Ballets: USA, and was a smash in Europe, on Broadway, and on the Ed Sullivan show. It turned up at City Ballet only about a decade ago—harmless, but hardly a major boost to Robbins’ reputation. It has first-rate décor (Ben Shahn), costumes (Florence Klotz) and lighting (Jennifer Tipton); it’s just unnecessary pastiche, particularly since the company already performs West Side Story Suite. But I got a kick from seeing Justin Peck released from his usual job as partner and porteur, and really moving. This boy can not only choreograph, he can dance!

Here’s how the ballerina situation at City Ballet now stands: Tiler, Reichlen, and Sterling Hyltin continue to shine and grow—Hyltin in particular never stops expanding her capacities, and her repertory. Ashley Bouder stays strong, but without refinement. We anticipate Maria Kowroski’s return from giving birth with hope, affection, and trepidation—apart from anything else, she has the old-style glamour the others lack. And then there’s Mearns. 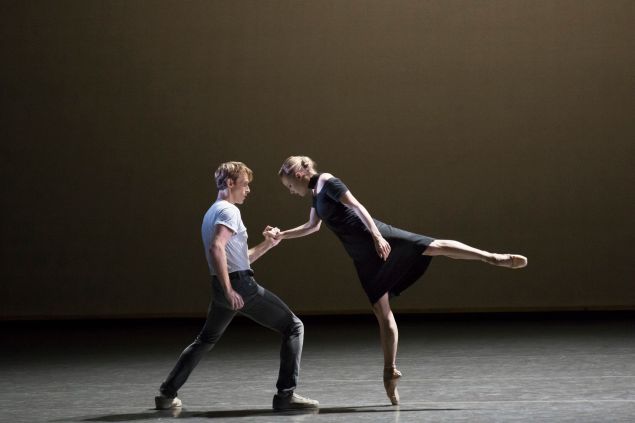 This season she was more tempered in her self-presentation. She’s been hailed as especially exciting in a company that tends to blandness—she gives her all. But since she too often lacks discrimination (or taste?), her all is frequently too much. Fortunately, the fifth of this season’s premieres—Kim Brandstrup’s Jeux, to Debussy’s famous score—is exactly suited to her large talents. Brandstrup is an experienced Danish choreographer, several decades older than the four choreographers who opened the season with new works for the dread fashion gala, and he knows what he’s doing. And what he’s doing is creating an old-fashioned dramatic ballet reminiscent of a number of works from the 40s and 50s: La Sonnambula (always popular in Denmark), La Valse, Pillar of Fire, all with highly romantic music and highly charged situations. The Mearns character, in her little black dress, is blindfolded or blind—or both; no way of telling. She’s involved with Amar Ramasar, but he’s more interested first in his bouncing soccer ball, then in Sterling Hyltin. Mearns does all the blind stuff—feeling her way, stumbling, arms out-stretched—but then her blindfold goes, her sight returns, and Adrian Danchig-Waring comes to the rescue. And how does she thank him? He kneels and she places the blindfold over his eyes! What a triumph for Womankind, and—gee!—what a total surprise!

This piece is certainly not the equal of the ballets it may remind us of, but it’s an effective and respectable work, handsomely costumed by City Ballet’s own Marc Happel, who—unlike most of the Fashion gang—knows how to create costumes that are both good to dance in and good to look at. Jeux is a fine vehicle for Mearns, and I’m glad to report that she’s restrained in it—unlike the way she exaggerates (and undermines) La Valse itself. Perhaps if she continues to tone down her flamboyance where it’s inappropriate, her many ardent fans will cool to her, but I for one will be deeply grateful. Given how talented she is, I don’t enjoy not enjoying her. 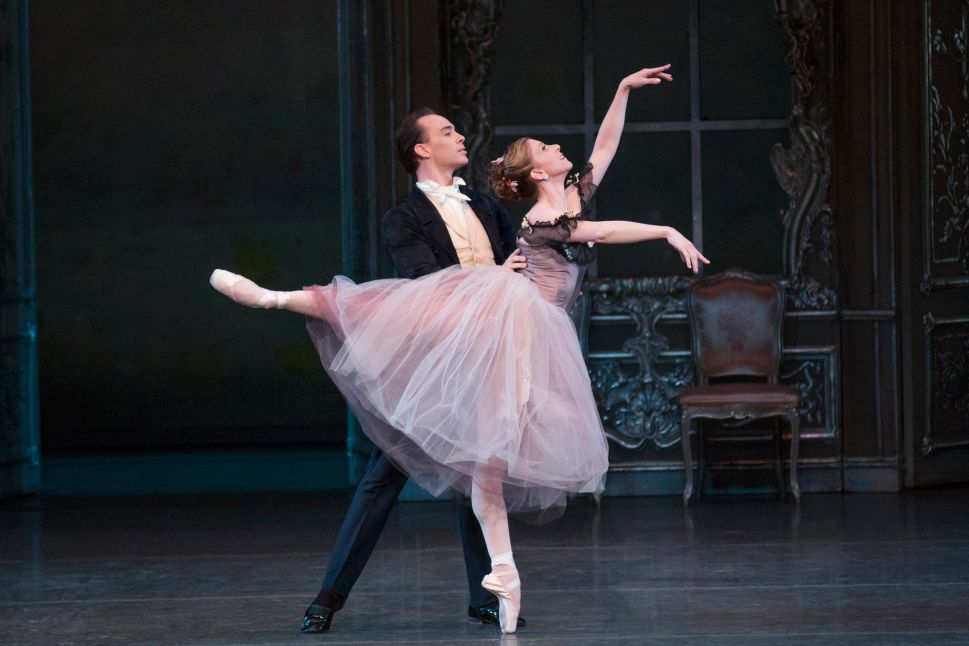