WARREN – When Aristotle considered the elements of great drama in “The Poetics,” he discerned plot and character as the core, and relegated matters like special effects and setting to very secondary status.

If this political cycle feels lacking in plot and even – bizarre for New Jersey – characters – the Stone House at Stirling Ridge last night nonetheless supplied a memorable setting for this eighth annual Democratic Party gala. The place sits grandly atop a leafy ridge, scene of many a wedding party where the principals – girded by a blazing outdoor fire – likely set out to conquer life together with all the best intentions only to encounter heartbreak after miserable heartbreak.

Such has been the Democrats’ history here, as their laboring has left them unable to ensnare a freeholder seat in this Republican stronghold, while the 2011 reconfiguration of Legislative District 16 produced little more than tearful concession speeches. And yet it trudges on, this marriage of local ground soldiers and the party organization, offsetting county and district-wide Election Day gloom with glorious set pieces like the Stone House.

Up against the competition of a well-attended Senator Nick Sacco event and an Edison Democratic function at the Pines, both of which pilfered 2017 gubernatorial candidates looking to outshine one another in close proximity,  Somerset County Democratic Committee Chair Peg Schaffer last night welcomed former Acting Governor Dick Codey in as the guest of honor. A contingent of Essex power players gave the big ballroom some political gravity, as Essex County Democratic Committee Chairman Leroy Jones and his wife and Assemblyman Ralph Caputo (D-28) and East Orange Councilman Chris James dined with Schaffer and the chairwoman’s law partner Joel Shain. There was some interesting history at that head table. A long-serving Orange mayor ultimately banished to Somerset as Codey gained local power in the 1980s, the stately Shain – who served as an Army captain in the Tet Offensive in Vietnam – early in his political career depended on the alliance and political machinations of the Essex Chairman’s late father, Leroy, Sr.

But the mighty Essex is politically belly-up this cycle, with clerk’s and sheriff’s “races” indiscernible on the statewide landscape, and Jones probably relieved to find refuge from the five guv candidates flailing for his attention and slavishly attentive to his ring finger. Sedate in pinstripe majesty and barely acknowledged beyond a single microphone shout-out, Jones – who will eventually award the powerful Essex line to one of the gubernatorial prospects and thereby all-but coronate the next governor  – appeared to relish a chance at near political anonymity.

At the end of it, whatever could not be secured in the way of high drama and lasting happiness nonetheless produced a night of high ceilings and a roaring fire, the tinge of heartache, and the abiding undercurrent that if the cycle lacked intrigue, the setting at least hinted at elusive romance. 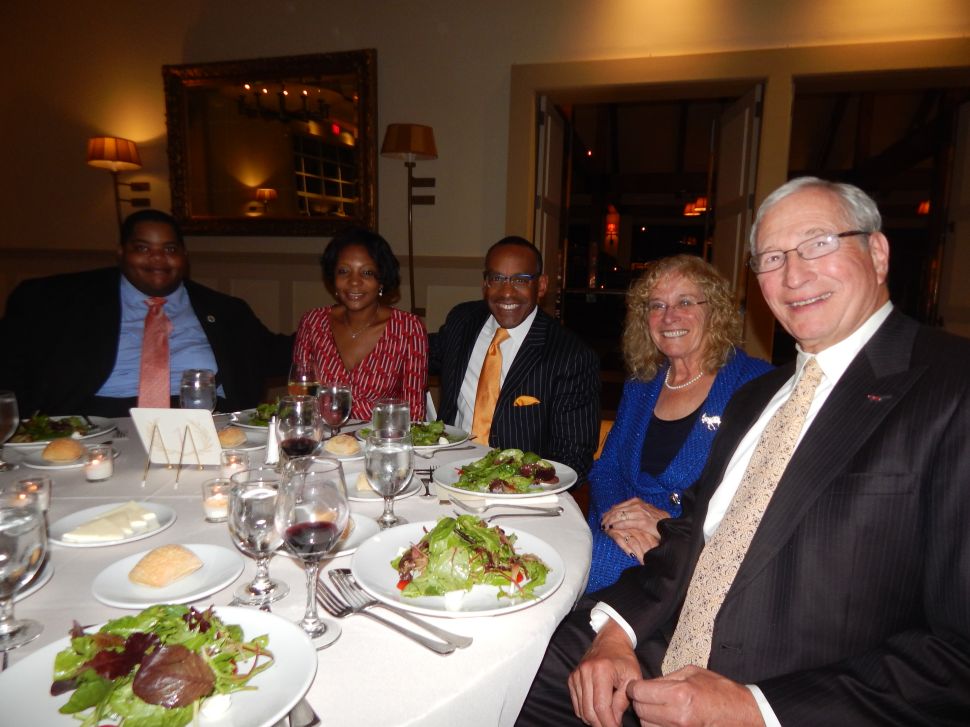