Wow. I don’t know if that was the most violent episode of The Walking Dead yet, but it was certainly close.

Coupled with the massive season premiere, it does seem like the show has decided to kick things into a higher gear. In many ways, this is the Walking Dead we’ve always been waiting for. The speed and randomness of its violence, the sheer brutality of its images, the sense of things coming apart, even as each character has his or her own interesting vignettes and personal arc…

Well, the characters who actually show up: During this episode’s action many of our protagonists are off herding the gigantic parade of walkers—the only moment of contact between the two parties Morgan, who shows up midway through the episode to take care of the air horn that is ruining their plan.

The rest, including Rick, Daryl, Glenn, Michonne, Sasha and Abraham, are still off presumably trying to get those distracted marchers back on the road and away from Alexandria. (We’ll have to wait until next week to see how that cliffhanger’s resolved.) The fact that the show can turn in an episode this good without a bunch of its most beloved characters shows just how good its ensemble is, something we sometimes forget when the Rick Grimes Crazypants Hour takes center stage.

And of course, their absence gives them room to show a lot of scenes of Carol being her amazing badass self. As well as young Carl being levelheaded, effective and remarkably un-annoying. (It doesn’t hurt that the show has introduced a far more annoying and whiny teenaged character, Ron, as his sometimes rival.)

Even though he doesn’t appear at all in the episode, though (he’s barely even mentioned), Rick’s fingerprints are all over it. Ron and his mom fight about him, and the fact that Carl’s dad killed Pete is clearly feeding into Ron’s seething jealousy of Carl.

We also spend some time with Denise, the new doctor who has to take over now that Pete is gone. Played by Nurse Jackie’s Merritt Wever, she’s perfectly cast as a panic-attack-prone psychiatrist in way over her head. But after Ethan Embry last week and her this week, The Walking Dead has really got to stop casting recognizable actors as newly introduced Alexandrians. The town just isn’t that big that we wouldn’t have seen these people before. Now that most of them have been killed and there are only like 12 Alexandrians left, if like Juliette Lewis just shows up in the next episode like, “Hey, yeah, I’ve been here the whole time,” I’m gonna call shenanigans.

But it’s mostly Rick’s predictions, not his actions, that have a big impact on this episode. The show just keeps making them come magically true. Isn’t it weird that right after he comes along telling the Alexandrians that they have to learn to defend themselves, they’re suddenly attacked for the first time? Though it’s probably not a coincidence: The Wolves have likely been watching the walls for weeks for the right opportunity to invade, the time when the town was least defended, and Rick’s “lead the zombies away from us” plan involved almost certainly the largest party to ever leave the walls all at once.

More predictions coming true: Last week Rick told Daryl that Alexandria is better off not recruiting new citizens, and lo and behold, it turns out that Aaron’s recruitment pics, which he was forced to leave behind when the Wolves nearly trapped him and Daryl last season, provided the attackers with vital knowledge of the town’s layout.

The Wolves are interesting antagonists, in their apparent lack of motivation. They’re not interested in stealing stuff or taking over the town. The lunatic things they say seem to indicate they have some philosophy of purging the world of humans, who they think no longer belong in it, but that really doesn’t matter. They just seem nuts and really into killing as brutally as possible.

Which brings us to the central conflict of the episode, the dispute between Carol and Morgan. Carol, the first person to see the attack begin, finally flips back from housewife (she’s literally just put something in the oven) to ninja warrior and begins offing Wolves with extreme prejudice. Meanwhile, Morgan tries to repel the attack without killing anyone. At one point he and a still-helpless Father Gabriel are tying up a Wolf he has subdued, and Carol just comes by and shoots the prisoner in the head. You don’t get more of a contrast of attitudes than that. And in the episode’s final scene, they just pass one another by on the street, wordlessly.

The problem with this conflict is that it’s stupid. It’s obvious that Carol is right and Morgan is wrong. The show has already established very, very well that you have to be willing to kill without mercy to live in this world. It’s all well and good that you have your own Zen attitude and all, Morgan, but not everybody can wield a staff like you and incapacitate bad guys with a nonlethal weapon. Some of them are just good at shooting, and that’s how they survive.

Not to mention that at one point, after Morgan drives five Wolves off instead of killing them, their leader picks up a gun from a dead body on the way out. Nice job arming the enemy, bonehead.

Meanwhile, the episode clearly wants us to think that when Carol dresses up like a Wolf—even drawing a W in blood on her forehead—she is in danger of becoming one. Always a danger with chameleon-like characters. And after the violence has passed (it all only took 45 minutes, according to Carol’s kitchen timer), she seems full of doubt, sitting down on a porch and rubbing at her bloody W, while considering lighting up a cigarette she just complained about as a disgusting habit a few hours earlier.

But the thing is, we know Carol isn’t a Wolf. She isn’t killing for the sake of killing, she’s killing to save the ones she loves and the things she values. Carol is, above everything else, the show’s quintessentially practical character. She does what needs to be done. If Morgan wants to dissent about what should be done, that’s his choice—but it’s not actually helping anyone survive.

And survival is what this is all about, as the introductory sequence, giving us Enid’s backstory, reminds us. We see how Enid weathered the apocalypse, adopting as her mantra “JSS” (also the episode’s title), which stands, we find out, for Just Survive Somehow. It’s a nice contrast to The Walking Dead’s overwhelming obsession with what people have had to become to survive in this world. Enid, she of the thousand-yard stare, has taken a wider view. It doesn’t really matter what you become, as long as there’s a you at the end of it. 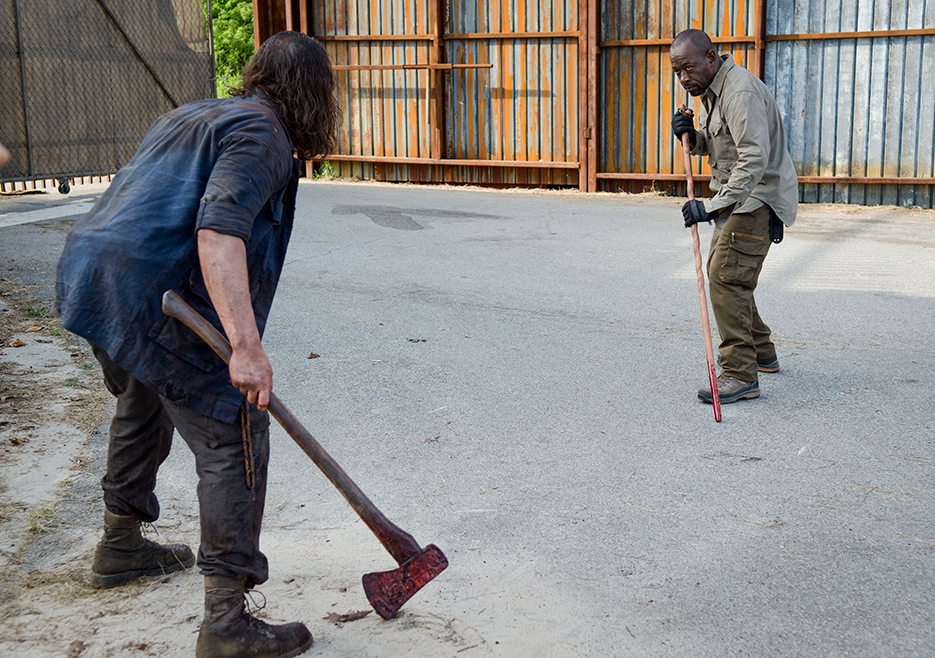