“Hey you. Dumbass. Yeah, you in the tank. You cozy in there?”

It’s worth remembering that the first time we met Glenn Rhee, he was just a voice on a radio.

It was the very first episode. Rick thought he was trapped, with no way out, until this chipper voice reached out to him and talked him through it.

Glenn has been talking us through it ever since, for five seasons. In the ecosystem of the show, he’s always been central: Rick’s the leader, Carol’s the shepherd, Daryl’s the guide. But Glenn’s the hero. He’s the one that keeps them going, and the glue that keeps them together.

And since Herschel’s death—that’s what that watch is all about—he’s been their moral center. They all do what needs to be done. But Glenn’s always the one who shows them why.

But this isn’t a eulogy. This is about walkie-talkies.

See, even before its tragic final minutes, “Thank You” was an episode all about communication. Communication, and the lack of it—that staticky silence which is all that comes through when nobody’s picking up.

This season has already been notably more active and violent than any of the last five (and we’re only on the third episode, so buckle up, people). But while “First Time Again” and “JSS” were edge-of-your-seat, action-packed episodes that were all about the actions themselves, “Thank You” was about the messages we send about and around those actions, and how those messages are received—if they are at all.

So when Rick tells Michonne and Glenn what they already know is true, that not everyone is going to make it back to Alexandria, he adds that they should be ready to save themselves rather than their charges, if it comes to that. Neither Glenn nor Michonne is able to really hear that message, though. With devastating consequences.

And one person who is not meant to hear that message does: Heath, who spends the entire episode giving Michonne flak for something she didn’t say and doesn’t agree with.

When their conflict finally comes to a head, Michonne finally spells out, in crystal-clear terms, what Rick has been trying to tell the Alexandrians all along. That there are some things you can’t know until you’ve seen them, until they’ve changed you, made you ready for the new knowledge of The Way The World Is Now.

Heath, face covered in blood, having lost four friends in a matter of hours, finally gets it by episode’s end. Just in time to return to an Alexandria that is nothing like the one he left. A place that has also finally heard what they’ve been trying to tell it all along: that safety is an illusion.

More missed communications: New redshirt character David, already doomed by a shoulder bite, writes his new bride Betsy a note for Michonne to take back to her. But Michonne insists that he take it himself, after which he dies and the note gets trampled under(zombie)foot. Which may be for the best, considering Betsy has about a 50-50 chance of already being dead by Wolf attack anyway.

And then there’s Daryl, who seems to spend the entire episode just driving in one useless big circle. He deviates from the plan and leaves Sasha and Abraham to lead the gigantic walker herd themselves, while he heads back to help Alexandria and/or Rick (it’s unclear). But then changes his mind and comes back after not being able to raise Rick on his walkie-talkie. Because sometimes the static is the message.

Just ask Nicholas, who keeps fading in and out of a fuzzed-out haze of some kind, like halfway between a panic attack and receiving radio signals from a distant star. It’s massively effective filmmaking/direction, giving us a sense of his overwhelming guilt and fear and self-loathing and indecision without ever having to articulate it.

So when he and Glenn are trapped on that Dumpster and he turns and shoots himself with a muttered “thank you,” it feels deserved. And at the same time, we have no idea what he means. Thank you for believing that I can redeem myself after the awful things I’ve done? Maybe. But also: Thank you for leading me into a dead-end situation, where the choices are suddenly as clear as possible; thank you for stopping the endless conversation in my head where I have no idea what to do ever and I’m only pretending to be a whole human?

Of course, as beautiful as it could have been, it’s not. Because even in death, Nicholas is an utter idiot. Maybe he could have sacrificed himself somehow to save Glenn? But instead all he does is drag him down with him.

I’m not going to weigh in on the debate about whether Glenn is really dead. It’s true that the way the scene is filmed is rather strange—The Walking Dead doesn’t shy away from showing us even beloved characters dying in gruesome ways, but here we don’t actually see that it’s Glenn’s body being ripped apart. We’ll have to wait some weeks to find out for sure. (“Weeks” plural, because next week’s episode will apparently concentrate on Morgan’s backstory—and I for one am eager to learn about this mythical cheesemaker who taught him how to fight with a staff.)

The really unique thing about his death scene, though—especially in this episode all about communication—is that nobody else is there to witness it. Nicholas is dead, and everyone else is off fighting. When major characters have died before now, there has almost always been an audience: Shane on the hilltop, Herschel in front of the jail, Beth in the hospital. But nobody is here to know that Glenn’s dead, to take the message back to his wife. The truth is, this is probably the rule, and the others are the exceptions. In The Way The World Is Now, you probably never know how your friends died—they’re simply gone. It will be interesting to see how our protagonists react to the mystery of his disappearance. (Let’s hope they don’t spend a whole season searching for him, à la Sophia, k?)

And so when Rick calls him there at the end, it’s just static on the line. The last time they actually spoke, we now realize, was a goodbye of sorts—Glenn calls him dumbass, just like the first time. But now Rick is trapped again, in a vehicle surrounded by walkers, and this time there is no friendly voice on the radio showing him the way out. 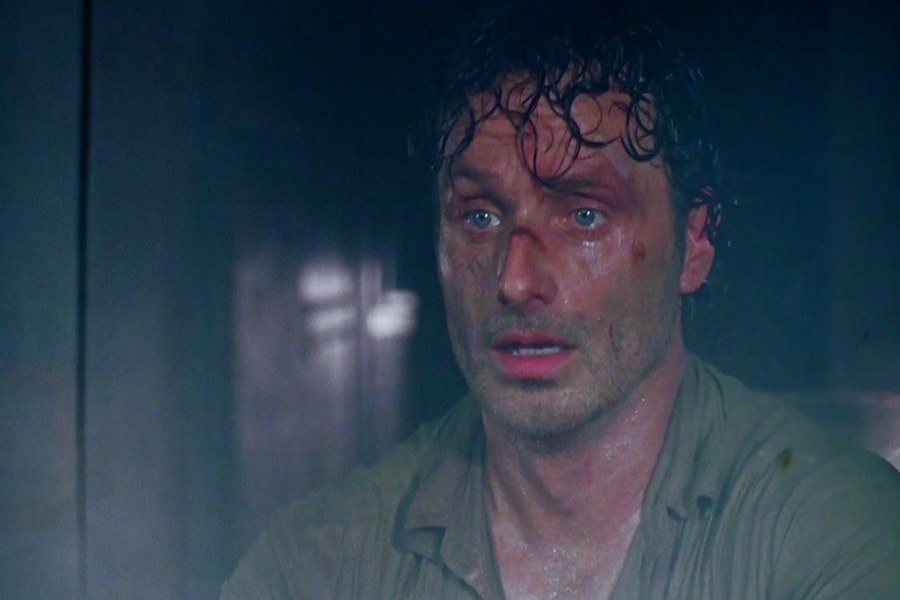