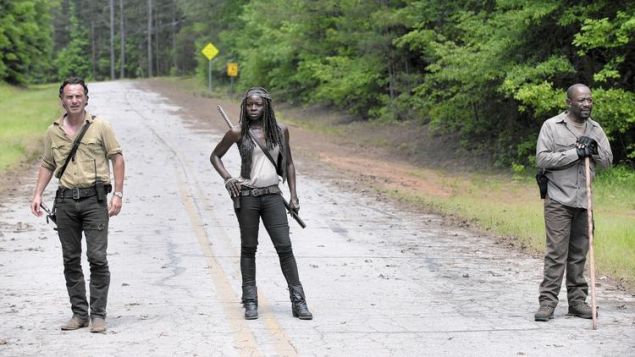 Waiting for something to happen. (AMC)

Oh, hey—did you forget this was a show about zombies? Well, here we’re going to give you some motherfucking zombies.

Pretty much everybody knows by now that, for a show about the zombie apocalypse, The Walking Dead is awfully slow at times. It doesn’t actually have that many scenes of real attacks by the undead. Sure, there are plenty of rotting, shambling corpses, and people shooting/stabbing them in the head, but that’s not most of what the show is about.

Mostly, we get lots of people talking to each other about (or fighting with each other over) what life is like now in this here apocalypse. It’s the hallmark of the show (and probably its most divisive aspect)—it’s really about people surviving, not about scary monsters.

So in the opening scene of the season 6 premiere, you can almost hear the producers chortling as they gleefully wave to all the fans who just wanted more zombies. You want zombies? OK, here’s about 20,000 of them. Have fun!

I know I gasped when that tractor-trailer plummeted off the cliff into a gigantic herd of walkers—I don’t think I’ve never seen anything quite on that scale on television. And my surprise was as much at the technical achievement as it was as the storytelling one. An episode like this, with its massive size and thousands of extras, is a good example of what you can accomplish when you’re an ascendant network and you’ve got (arguably) the most-watched show on television.

We’re going to see the word ‘epic’ thrown around a lot in the days to come about this episode, and it is certainly that. But it is also in its own way an overt show of strength—and it should be admired on that basis alone.

It is also a show of strength for Rick Grimes, of course. This is his moment to really show to Alexandria just what he means when he says that they can only survive if they listen to him and see the world the way he sees it. And once they see those massive numbers of walkers, it becomes pretty hard to argue.

Over the course of five seasons, we’ve watched Rick become slowly become the native man of the apocalypse. He’s the perfectly built human for surviving this screwed-up world. But to get there he’s had to abandon any sense that this new world is just a temporary situation. To become superhero cop Rick, who can live through anything, who can keep people alive, who can keep a baby alive, who can save a whole community, he’s had to treat the zombie apocalypse as simply the natural order of things, just the way the world is. Everything else is just a distraction.

Last season, we were sometimes shown the other side, particularly in the person of Bob Stookey, the eternal optimist. Bob though this was just a nightmare that humanity was going to wake up from one day, and we’d learn to be what we once were. But Mr. Bob, he dead.

Then they came to Alexandria, which also seemed to be a counterexample, a place where peace mostly reigned. There, Rick’s way of living just looked feral and crazy. How can you think the world needs to be armed and dangerous in the face of this suburban tranquility? Sure, wife-beater Pete needed to be put down, but still, in the end, people were going to go back to their lives, shaken but not stirred.

Then Rick goes out with Morgan (Lennie James, finally taking his rightful place as a member of the main cast, along with Sonequa Martin-Green) to bury Pete’s body outside of the walls, and he finds the canyon, which is operating as a huge zombie trap. And he says: “This is how.” Rick finally understands how Alexandria has survived so peacefully for so long. This trap has been drawing off all of the walkers that should have overrun the town long ago. The community has been accidentally protected, which is why this group of people who have no survival skills, people who should have been dead years ago, still exists. To Rick, the whole town is a violation of the natural order of things—and now he understands how it happened.

And so it is with a self-satisfied air—his preconceptions about the world have been thoroughly ratified, after all—that he goes about telling the Alexandrians that they need to set the world back on its right track. Not only arming themselves and learning to be survivors like him, but also opening the floodgates and letting all of the zombies out, where they belong, out there overrunning the world.

They’ll lead them away, of course, through an elaborate plan that involves creating a huge herd parading down the street, then making them take what seems like an unnecessarily sharp right-hand turn to lead them 20 miles away from Alexandria.

And the episode doesn’t really give us much room to dispute that this is the best plan. Carter (Ethan Embry, who just suddenly appears in this episode as if he’s somehow been hiding in Alexandria all along) the lone voice of dissent, is repeatedly shouted down, humiliated, and finally gets his face eaten off.

In fact, the whole structure of the episode, with its present-day color scenes and black-and-white flashbacks, is set up to make us see that Rick is now the Lord God of The Way The World Is Now. In a flashback, he says that truck is going to collapse into the canyon one of these days, and we’ve already seen in the first scene that it is going to do so very soon. He tells Morgan that he doesn’t have to kill Carter because he’s too weak to survive, so he’ll inevitably get killed anyway—and we’ve literally just seen him get zombie-chomped in the cheek like two minutes before. And so on.

It’s very effective as a narrative structure—at first I really wanted to hate the use of black-and-white, which seems unbearably pretentious for show about zombies, but it worked extremely well. It does open, however, up very little room to critique Rick’s utterly bleak vision of the world, as we already know he’s going to turn out to have been right. And lord knows you do not want to be on the receiving end of aRick Grimes “I told you so.” (Just ask Father Gabriel, who gets the tersest verbal smackdown of all time in this episode.)

Luckily, we still have Daryl, who has found himself a purpose and doesn’t think Rick’s narrow viewpoint should stop the world from spinning on its axis. And now we also have Morgan, watchful and soft-spoken, who seems to see everything the other characters do not—he sees straight through Carol’s still-amazing meek housewife routine, for example. And Morgan believes that Rick isn’t entirely this person he’s had to become.

And then, of course, there’s the fact that the plan, as solid as it seems, doesn’t actually succeed. A loud noise comes out of Alexandria and makes all their careful planning useless, as the walkers leave the road and start swarming toward the one place our heroes never wanted them to be.

But who on earth is honking that horn?

Related: We talked with The Walking Dead‘s showrunner Scott Gimple about the season 6 premiere, and beyond. 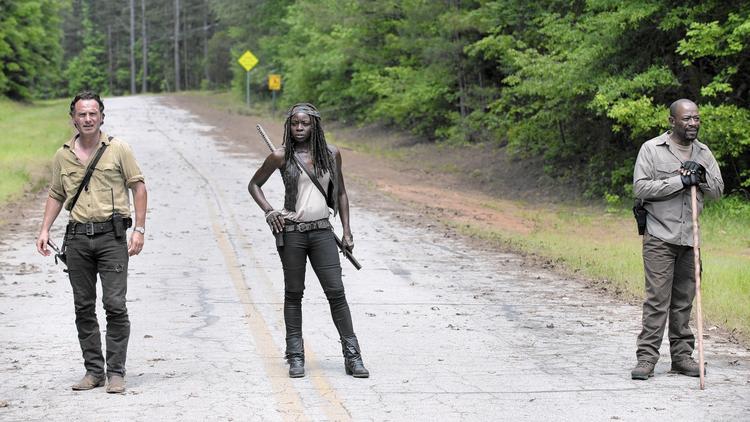