Robert Kirkman, the writer behind The Walking Dead comic books and executive producer of the AMC series, laughed when an audience member asked him his opinion on TWD showrunner Scott Gimple during New York Comic Con. “Scott probably knows more about the comics than I do,” Mr. Kirkman admitted. He might not have been entirely joking.

When Mr. Gimple took over The Walking Dead after the fourth season the show was in a strange place, stuck somewhere between the glacier-paced storytelling of Hershel’s farm and the shock-factor cannibalism of Terminus. Mr. Gimple, a long-time writer on the series and a longer-time lover of the comics, managed to get this zombie-train back on track, finding a happy medium between the human and the undead. Then, during last night’s season six premiere, he outdid himself by creating an actual zombie train.

I hopped on the phone with Mr. Gimple, who wrote the premiere with Matthew Negrete, to go behind-the-scenes of possibly the largest episode of The Walking Dead, ever.

Observer: This episode seemed grander than anything the show has gone for before. Is that something that was talked about at all, or did it just happen naturally?

Scott Gimple: With the story that we were telling, I think it naturally happened. I do love starting very big, but it wasn’t like looking for a reason to start big. These survivors have been around a while, and they are exceptional at surviving. Because of that they can do amazing things that other people can’t, and I wanted to see them do something amazing.

Can you talk me through writing Rick and Morgan’s plan? How did you plot all the moving parts?

It was a lot of math, and a lot of military stuff. It’s weird, because you have to go through the plan like it’s real. And we did, we went through it in our brains. Then we added in the very ambitious structure of the episode, how we were showing these events in time next to each other. It was tricky stuff.

What exactly do you mean by math and military stuff?

It’s more us saying, ‘How on Earth do you catch the attention of this many walkers? How do you time it out? What is Plan B, Plan C, Plan D, Plan E?’ There’s a lot of stuff we don’t explain, but we wanted to know ourselves, like the various points that they hit, the various colors of the balloons and what it meant to individual characters. Just real house-keeping and planning stuff. We wanted to know this stuff.

So yeah, it is a little bit of math; it’s knowing the whole story first, then deciding how you divide it all up. Also, how people are going to hold on to all these ideas and all these characters in their head. It was a very tricky episode, but it was a lot of fun to do.

Does the decision to do the black and white come from a writing standpoint or a directing standpoint? And what were you guys going for with that decision?

As a writer, I was always thinking black and white. I worked very closely with Greg Nicotero, who directed the episode. I told him about it, and we knew we were going to try some visual separation. We were sure we wanted some sort of visual contrast. And it’s so exciting and gratifying to do black and white, just because of the origins of this show. And the stuff Greg shot was so beautiful in black and white. It gave the audience an edge on going through this structure and not being distracted by having to orient themselves with every jump back and forth.

It kept you oriented, more than anything.

It also added to the scenes between Rick and Morgan. At this point, how much is Morgan helping Rick? I feel like he was almost his guru in this episode.

Well, I think the structure was very much driven by the Rick and Morgan story. We have the episode titled ‘First Time Again,’ referring to the conversation where they are sort of meeting for the first time…again. [laughs]. They believe by the end of the flashback story that they know each other, that they know the type of men they are. Morgan tells Rick ‘I knew you weren’t going to kill that guy in the armory. That isn’t you.’ And Rick says, in a performance I really dug from Andy, in a sort of sad but certain way, ‘I didn’t kill him because he’s going to die no matter what.’

We immediately cut to that moment where not only Carter dies, but Rick has to put him out of his misery. And he does put him out of his misery, there was no coming back from it. But, Rick and Morgan look at each other like ‘Oh shit, we’re not living in the same world.’ Both of those men, their individual experience is real, I don’t think any of them are living a lie. But it’s that sad feeling of just not being on the same page after all this time. It’s a very simple, sad story between this epic, cataclysmic, catastrophic, insane story.

Story-wise, and character-wise, why did Carter have to die? What did he represent that needed to be introduced, and immediately killed off in the same episode?

He was an Alexandrian that just couldn’t come around to Rick’s thinking until the very end. But it wasn’t like Rick had a political idea, it was just an understanding of what needed to be done to survive. But that’s the deal. If you don’t figure it out soon enough, you could die. And Rick called it. However tough in some ways he was, it wasn’t enough. Carter really did need to learn from Rick quicker than he did.

Is there anything you can tell me about the horn at the end of the episode?

Oh, I cannot [laughs]. Other than you will learn more about it.

That’s kind of what I expected.

I can say, it is NOT an errant saxophonist from the Dave Matthews Band.

Well there goes my only theory.

I just really wanted to put that rumor to rest right here.

Really, the same philosophies since I started. The way I started in any relationship to the show, even before the show existed, I was a reader of the comics. I have sort of a comics background, I’ve been reading comics pretty intensely since I was young. For me, it’s about telling that story from the comics, but playing around with some of the details, and even heighten some aspects of the comics that I love. Also, to give every single character a story, beginning middle and end. I want to really make sure that it’s an emotional TV series, as much as an exciting TV series. I really do believe the two things go hand in hand. 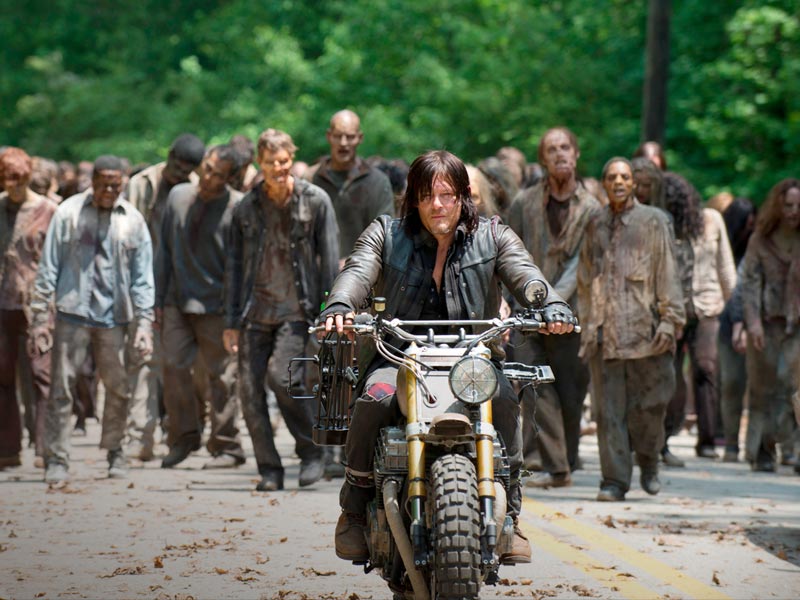