It was Halloween, by way of art dealer Jeffrey Deitch – hand-shredded costumes and handcrafted movie ephemera, created by a family team that couldn’t be more brandable.

The Wolfpack, six brothers who were raised and home-schooled in isolation by their parents in a lower East Side apartment, were a film sensation last January when a documentary observing their odd insular life premiered at Sundance.

That eponymous film, The Wolfpack, has since made $1.3 million at the US box office, a respectable number for a documentary. It has also made money on VOD, for the home-bound audience that wants to watch these home-bound boys act out the movies – mostly violent ones — that were their only contact with the outside world.

The young men of the Angulo family, five of whom still live together in their cluttered apartment, are a success in the world of independent film and in the ever-expanding universe of film festivals. Now the sons of an Ecuadorian father and an American mother have leveraged the art world as a platform.

At the Deitch Gallery on October 20, Dan Martensen’s photographs of the Angulos lined the walls of a narrow space that led into a room packed with the handmade home-made props and figures and drawings that the brothers had made since 2008. The show was themed for Halloween – not just the date, but the multi-sequeled gore-fest of a movie franchise. The objects were a pop arte povera.

One brother, Mukunda Angulo, calld The Prop Master, was eyeing the Halloween wall, a collage of hand-painted posters and 8 x 10 colored pencil drawings inspired by the slasher genre. He explained that the team would divide work up among themselves.

Mukunda pointed out one of his own creations, an 8 by 10 colored pencil drawing of the serial killer Chucky from the horror classic Child’s Play. He identified other pictures as the work of particular brothers.

Window Feel, a six-minute film by Mukunda, featuring his brothers and costumes from their collection, made its premiere in the room.

It was Outsider Art from the inside of a housing project. “There’s a lot more at home,” said Mukunda Angulo, who wore an orange scarf decorated with pumpkins, “this is just what we could bring to share with anything that could make sense. We didn’t throw anything out. That’s why our how was such a big mess. It still is a big mess.”

Given the found materials and the themes, the gallery show could also have been called Child’s Play.

The entire installation – encompassing horror films, guns, superheroes, rock&  roll, and other testosteroned themes – had a stylistic integrity that reflected the labors of dedicated boys with lots of time on their hands. It’s the kind of ensemble that might find its way into the collection of a zillionaire entrepreneur in Brazil or Switzerland. But Eddie Angulo stressed that The Wolfpack Show was not for sale.

Eddie, now 17, is the youngest of the brothers. His long dark hair is now a mane of blonde streaks, arching back – in homage to one of David Bowie’s many incarnations?

Eddie said that the work on view represented about half of what the brothers had in their apartment, maybe less – all of it created by the Angulos themselves, or twisted into their style in an approach that we might called disfigured appropriation.

Eddie said that he was finishing high school. When I asked instinctively which school he attended, he looked at me in the way that a member of an elite corps might view the uninitiated. “Home-schooled,” he responded impatiently.

The work moved from the screen to the gallery after the Angulos exploded their way to press attention, branded as a ensemble with long black hair, dressed in Reservoir Dogsblack suits – too young to be the similarly attired Rat Back of legend, too old to be anything like the Brat Pack.

As the film became a sensation, the brothers were under siege by the media. When the idea of a gallery show emerged, they contacted Jeffrey Deitch, who welcomed the idea of showing their film-inspired creations. His calculation seemed promising. In the hipster crowd that packed in (despite the absence of alcohol, or even ), Lisa Dennison of Sotheby’s was also a visitor.

The work went on view with photographs of the brothers by Dan Martensen. The prints, in editions of five, are selling for $1000-$3000, framed — affordable these days, even by movie memorabilia standards.

Martensen’s pictures, evoking everything from The Blues Brothers to Dianne Arbus to The Beatles to William Eggleston, have a long history with the brothers whom the outside world has known for a mere ten months.

“They’re not afraid to be themselves – or to be Batman,” said Martensen. 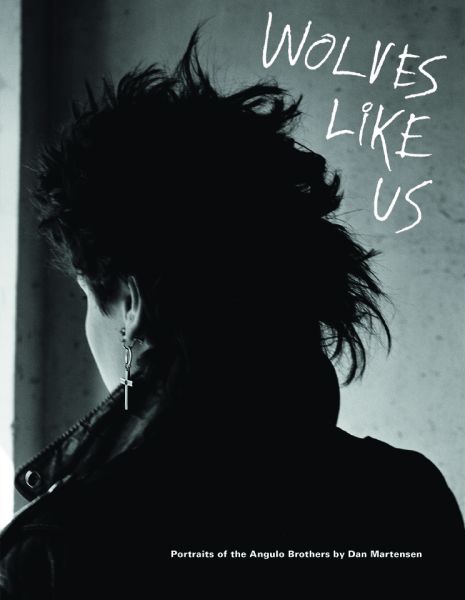 And the pictures represent something pivotal in the family’s life. His images of the six boys running through the countryside at a location upstate observe them on one of the early occasions that they were permitted to leave their apartment. Lots of the shots look like album covers of an obscure brother pop band. Plenty of them show the boys doing exactly what you would expect – imitating scenes that they had seen in the movies.

Portraiture was a departure from Martensen’s last show of landscapes. “Landscapes never complain. They’re never late for an appointment,” he said, “but the boys, they’re such free spirits.”

The photos are published in Wolves Like Us: Portraits of the Angulo Brothers by Dan Martensen. Even if The Wolfpack Show is not for sale – at least not yet – Deitch stands to cover his costs with sales of the doc’s dvd and the book. A portion of the book proceeds will go the Angulos.

Talk of taking the Wolfpack Show on the road was a constant topic at Deitch. Film insiders saw something else at work. As the awards season approaches, there’s even more talk of Oscar nominations.  The Angulos already have the outfits. 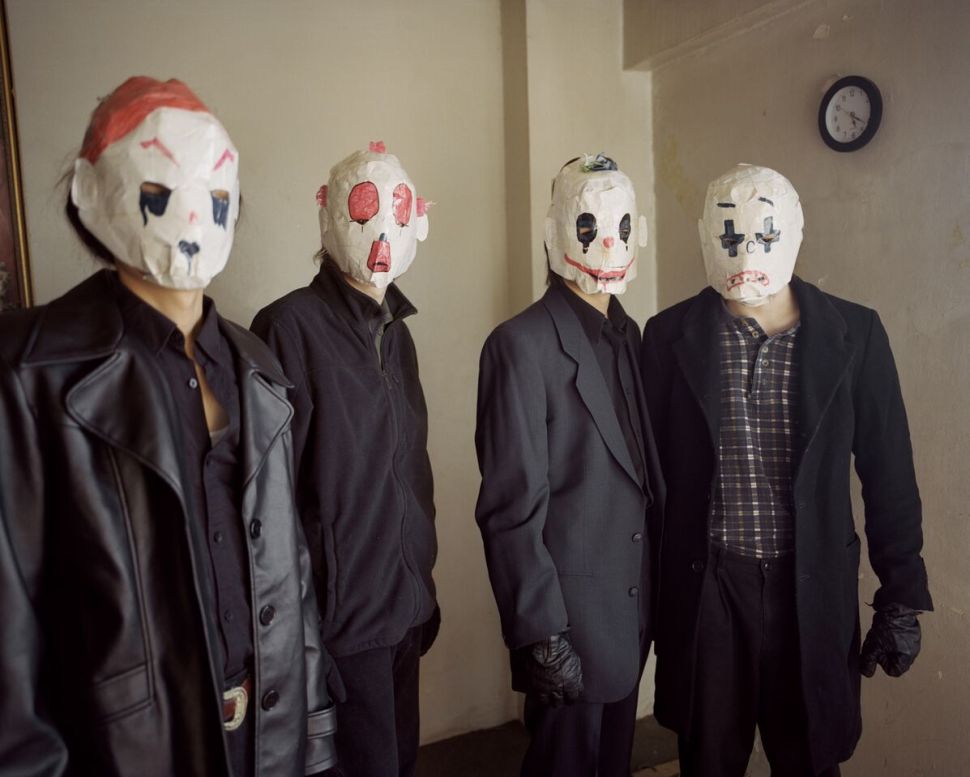