The truth is….The X-Files revival is pretty damn good. I mean, pretty damn good based on the first episode, screened at New York Comic Con on Saturday. David Duchovny hasn’t lost the Fox Mulder conspiracy stream-of-consciousness, Gillian Anderson’s skeptic face is still set in slowly breaking stone, and the premiere introduces a new narrative that both ties into the overall X-Files mythology and satisfyingly ushers the paranoia plot into the modern age, cell phones and all.

Unfortunately, there’s not much to offer plot or spoiler-wise, mostly because I am 100 percent sure Chris Carter has the ability to make me disappear. Luckily, after the screening the creator himself, along with Mr. Duchovny and Walter Skinner himself Mitch Pileggi, sat down with the press and shed some more light on the 6-episode mini-series.

Here’s everything we learned about The X-Files revival from Chris Carter, David Duchovny, and Mitch Pileggi.

The six episodes will vary between mythology and case-of-the-week. “If you really look at the way we structured it, it looks like  a quarter of a regular TV season,” Mr. Carter said. “So we put in as many mythology episodes as we’d put in a quarter season, as many standalone episodes, and one comedy episode. It was really also a feature of who came back to do the show. So when [writer Darin Morgan] came back we knew we’d get a comedy episode. When [writer Glen Morgan] signed on, we knew sort of what we’d get.”

Cast and creative wanted more than nostalgia, they wanted the revival to be timely. “When the show first went off the air, we were putting all our faith in the government after 9/11. We’re in a different time now,” Mr. Carter said. “If you’re paying attention to what’s happening online and on alternate media, you see people talk about possible conspiracies everywhere. We wanted to be true to the time we’re living in.”

“I think [the revival] is very valid right now, with the way our world is, and the way our government interacts with people. It’s so fucked up,” Mr. Pileggi added. “I think there’s a lot of stores to be told through this show about that stuff. We’re in a mess, this world is in a mess. If I was an alien I wouldn’t be coming anywhere near this neighborhood.”

Episode two will drop the overall mythology. “Episode 2 is what I would call a classic ‘monster-of-the-week’ episode,” Mr. Carter said. “You’re going to see the flashlights in the dark [in episode two,] all those familiar aspects.”

The biggest change for David Duchovny? Everyone is a better actor “Some of it is harder, and some of its easier,” he said.”The hours are harder, and the acting is easier. We’ve all gotten better since the beginning. I can look at – I don’t — but I could look at the first season next to the seventh or eighth season, and I’ll see different actors, talking about Gillian and I.”

But Mr. Duchovny is still probably less obsessed with the X-Files than you. “I don’t process [the hardcore X-Files fandom], I don’t think about it. It doesn’t affect me, it doesn’t occur to me,” Mr. Duchovny said. “The show has affected my life in that it started my career, it gave me opportunities, it gave me a lot of money, which are all great things. Most of all it gave me the chance to go to work and act for 14 hours a day, for eight years. I got to create my own acting school for eight years.”

“Yes, I’m happy to do it. I enjoy the people I work with, and I think the show is great. I couldn’t be prouder of the entire show,” he added later. “There’s so much of it I’m grateful for. But it’s such an interior thing to me. It’s like when you play a sport, at some point you stop thinking about hitting a tennis ball. You just hit the tennis ball. I just do The X-Files.”

If you’re new to X-Files, you will be confused. The premiere episode does begin with an explainer montage, but then launches into the world already established by the original run. “If you’re coming to the show new, you have some catching up to do for sure,” Mr. Carter said. “We brought the show back for the hardcore fans.”

Finally, look for the “The Truth is Out There” poster in the premiere episode. There is a moment, involving the poster, that lasts about a second but to me was the stand-out moment of the episode. It’s a beat that signals to the audience the X-Files you loved is back, and that nothing is the same. 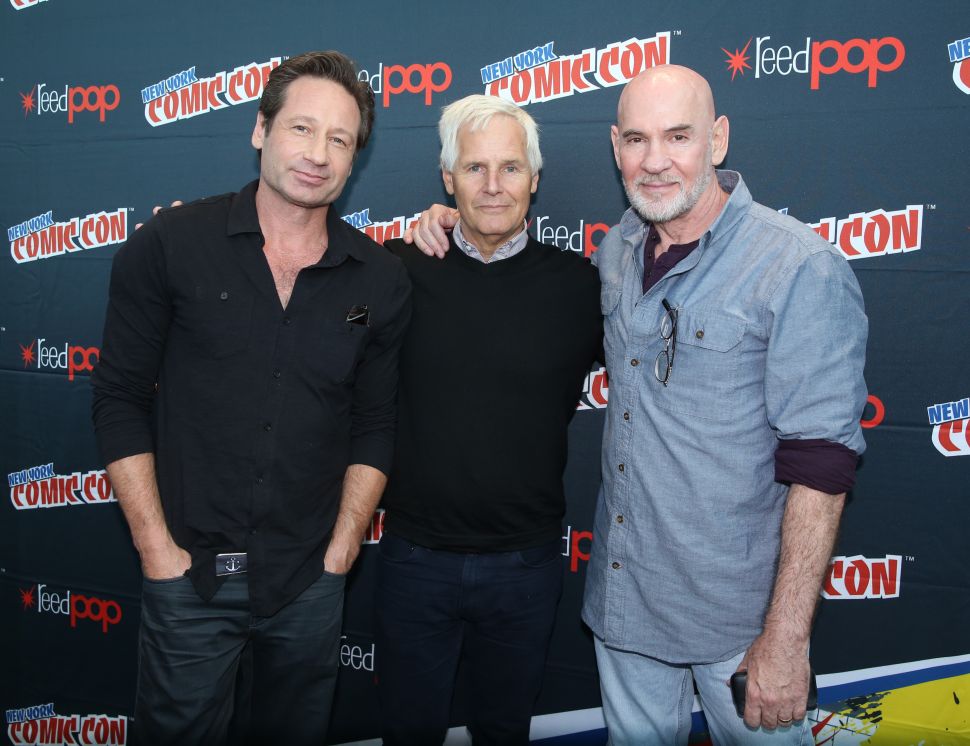