“Who’s that girl?!” blared from the speakers for the opening soundtrack of the 2(x)ist 25th anniversary runway show on Wednesday night at Skylight Modern in Chelsea. This being a show with the reputation of being the Victoria’s Secret of men’s shows, we were indeed wondering who that girl was.

“[She’s] the counterpart to the 2(x)ist man!” Jason Scarlatti, creative director of the brand, said after the show. Male models were buzzing around him in the brand’s lineup of all-white long johns, trunks and briefs that were featured in the finale walk. “I didn’t want her to be frilly and sweet.” And there was nothing froufrou here: the brand’s female models opened the show in a few pink numbers and a muscled Kevin Sampaio donned a pink dayglo brief, but it was all far from saccharine.

The show marked the brand’s official expansion into the women’s space even though a few female attendees confessed to the Observer that they’d been wearing the label’s henleys and tees for a while already. This new business featured everything from ruched bralettes and boy briefs to limited edition performance leggings and terry harem pants. Athleisure was clearly a focus.

“I was really nervous at first, but it’s all the same core,” Mr. Scarlatti explained. “[Our woman] has all the same attributes as [the guy] and that made it easy because it’s about fashion forward styles and great french terry looks. Once I got over the fact that it was a new category, the clothes came very easily.”

But of course Mr. Scarlatti didn’t skimp on his bread and butter: Out of the 58 looks in the show, only 20 were made for women, leaving more than enough space for the men to get their due. In addition to the underwear that started the label—a brief with a mesh back came down the runway on Andre Ziehe who is a long-time face of the brand—there were polos, textured pullovers and even sleeveless muscle sweatshirts in the line-up. Bags made a strong impression with a midnight camouflage print and the selection of tailored sweatpants came in on trend.

“[The] biggest achievement that we’re most proud of is that we we started as this little underwear company and now we’re a full lifestyle brand,” the creative director boasted. “We’re so proud that we keep growing and our customers grow with us, that we’re constantly gaining new customers and that they come to us as a lifestyle destination for being fashion forward and having quality product.”

Of the entire spectacle, it was the the male model selection that got Snapchat accounts going. Top snaps featured the rugged Walter Savage, hunky Oraine Barrett and even Ignacio Ondategui. The crowning moment of the night was the finale walk when they all appeared shirtless in all white to congratulate Mr. Scarlatti on a strong 25 years. 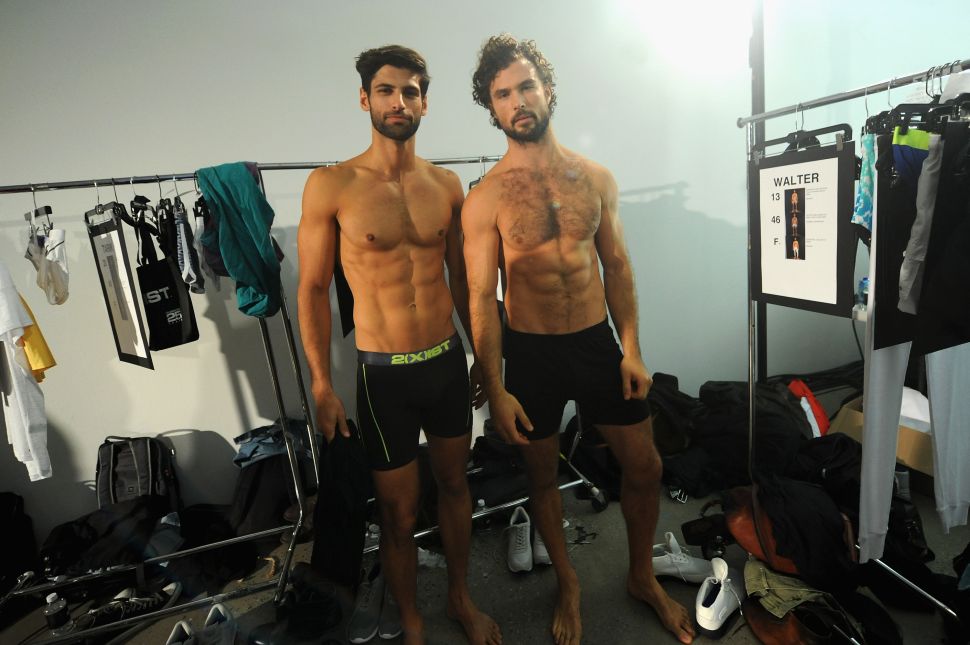