James and Alexa Hirschfeld, founders of the hugely successful digital invitation startup Paperless Post, are hardly the first siblings to venture into business together. Rodarte’s Laura and Kate Mulleavy, for example, cobbled together their first collection with savings earned from waitressing as 20-somethings. Meanwhile, Scottish designer Christopher Kane owes much of his fashion empire’s success to his older sister and business partner Tammy. The Winklevoss twins, although better known for suing Mark Zuckerberg than for their business acumen, nevertheless claim to be the true founders of Facebook. Such stories are proof that if you are lucky enough to get along with your brother or sister, perhaps teaming up together could be the key to success.

Such has been the case for the Hirschfelds, whose story began back in 2007 when James—then a junior at Harvard—was planning an ostentatious bash for his 21st birthday. “I [had] rented 80 palm trees and made this cool sort of oasis in Boston—it was a lot of effort,” James told the Observer at Paperless Post’s downtown offices. “But when it finally came time to send the invitations, there was no way of using online communication that reflected how much I cared. If people are using online communication for everything—from business to casual chatting—they should be able to use digital communication for important moments in their lives.”

With this in mind, James turned to his sister with a proposal to start a company of their own. Two years his senior and a fellow Harvard alum, Alexa soon left her job as an editorial assistant with Katie Couric, and the pair set out to create their own digital stationery platform, working out of a dorm room and a tiny office. They wanted to, in their own words, bring back the beauty of receiving and sending mail by combining it with the modern-day efficiency of the web. By the time his next birthday swung around, James was able to extend an invitation to his friends, via his own Paperless Post creation.

Kirsten Dunst used it for her 30th birthday party, the Obama administration for events during the 2012 re-election campaign and—rumor has it—Will and Kate for Prince George’s christening.

Eight years since their launch, James and Alexa are now running a company that has raised a total of $48 million, following an initial investment of $880,000. The office, which features your typical startup staples—communal work areas, free snacks and a workforce that mostly appears to be under 30—is composed of 130 employees. The website, which is known for its impeccably sleek design, has sent some 100 million online cards to date. Kirsten Dunst used it for her 30th birthday party, the Obama administration for events during the 2012 re-election campaign and—rumor has it—Will and Kate for Prince George’s christening. In all likelihood, you’ve either sent a Paperless Post invite yourself, or at the very least received one.

For all this success, James and Alexa, who grew up on both the Upper West and East Sides, are still enviously—scratch that, hatefully—young. At 29 and 31, the joint CEOs have this connect-the-dots formula for a flourishing startup, and their opposing expertise and appearances seem to be what makes the company roll. James, with floppy dark hair and preppy leanings, handles the design and business side, while a fair-haired Alexa, who has spilled her work wardrobe tips to Elle and Cosmo, oversees the product and tech teams. “I’m more user-experience and technology-minded,” Alexa says. “James is good at knowing what the user is going to buy, and the creative world he’s buying them into. My job is to figure out how to let them buy it, customize it and [make it] actually work.”

James chipped in: “We wanted to start a business together because between the two of us, we just about make a whole person—from a talents perspective—so it’s very knitted together.”

For true stationery lovers, there is no end to how much one is willing to spend on headed notepaper, leather planners or embossed invitations. For example, British leather goods brand Smythson enjoys a loyal fan base for its personalized correspondence cards, the price of which starts at $332. Countless luminaries have confirmed Cartier’s custom stationery as the ultimate indulgence. And, according to W magazine, 135-year-old Benneton Graveur in Paris provides Sofia Coppola with her note cards of choice.James chipped in: “We wanted to start a business together because between the two of us, we just about make a whole person—from a talents perspective—so it’s very knitted together.”

So, without the tactile qualities that come with putting a pen to beautiful paper—like the thought that sending an e-vite for your next cocktail soirée could run the risk of looking gauche—how does Paperless Post retain its appeal? With 50 design partners under their belt, the Hirschfelds’ venture is set apart from rival platforms by their keen sense of design. This quality, combined with an admiration for traditional paper products, has allowed them to penetrate the high-end market. Browsing the site, one comes across floral designs by Oscar de la Renta, wedding invitations by Vera Wang and tongue-in-cheek birthday greetings from Derek Blasberg. Fans of traditional stationery seem pleased, also.

“In the beginning we didn’t know if the people who love stationery and diaries and notebooks would hate Paperless for challenging that,” James said. “What we found really early on is that those are our most avid users, because they understand what we’re going for.”

‘We wanted to start a business together because between the two of us, we just about make a whole person—from a talents perspective—so it’s very knitted together’—James Hirschfeld, CEO of Paperless Post.

Regardless, 60 percent of users were still requesting print versions of their cards. As one of the most highly trafficked stationery brands in the world by 2012, Paperless knew such requests couldn’t be ignored. “No one lives completely on email but no one lives completely on paper. People are living across different platforms, and our vision of modernizing the way that people communicate personally didn’t exclude paper,” James said, seated opposite an office wall plastered in wallpaper designed by recent collaborator Patternity. “We really could offer digital and paper in ways that were new, more accessible and innovative. And so we started printing.”

Next up is a collection with Florida-based stationer Rifle Paper Co., known for its whimsically designed botanical motifs that are easily spotted in stores across Williamsburg. Founded by Anna and Nathan Bond, a husband-and-wife team, Rifle shares common ground with James and Alexa; while the product is paper-based only, Rifle reproduces hand-painted designs with very modern technology. A collaboration, according to the pair, felt natural. “We’ve taken very different angles,” James said. “But both of us have this vision of helping people communicate in a more beautiful and personal way.”“I just trusted you that it was a good move, and it was,” Alexa added. A testament to the strong work dynamic between the pair.

This shared vision has resulted in a 100-piece collection launching October 7, and cards can be sent both online and by post, leaving users free to choose how they prefer to send bon voyage/thank you/apology notes and the like. The launch is also accompanied by the “Bloom Room,” a floral-themed pop-up shop in Nolita. It’s an opportunity for the two companies, both founded in the same year, to showcase new illustrations and directions.

But with James and Alexa only just now exiting their 20s, was it ever a challenge to be taken seriously when they started out eight years ago? “We kind of benefitted in the opposite direction,” James concluded. “When you’re young in America with an ambitious idea, I think people actually give you the benefit of the doubt. We wouldn’t be here today if people hadn’t taken a positive approach.” 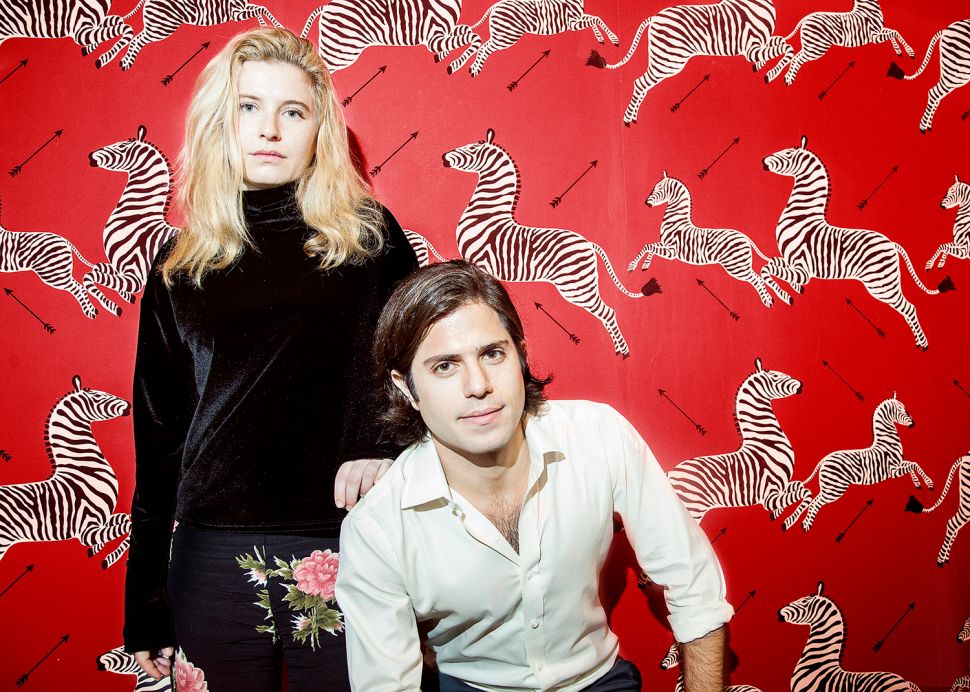