I’m going to be honest with you guys, I’m already bored of the Republican Party debates and we’re only three in. The first debate was a must-watch because early watchers of former Hewlett-Packard CEO Carly Fiorina (such as myself) knew that she was going to make waves in the undercard debate. We also wanted to know how Donald Trump would act in a debate.

In the second debate, eyes were again on Ms. Fiorina to see if she could hold her own on the main stage (spoiler alert: she did). But now it’s the third debate. We know all the candidates now and we know what they will be asked. We know their basic stance on any number of topics. At this point we’re just looking for sound bites.

Which is pretty much what the third debate was all about. The 10 candidates (at least it’s not 11 again!) on the main stage have become desperate to get heard, which made for a metaphorically bloody battle – at least between the candidates and the moderators. And so here we are, again, with a round up of where he candidate excelled and where each one floundered.

Where he floundered: He (incorrectly) challenged debate moderator Becky Quick when he claimed he didn’t call Florida Sen. Marco Rubio “[Facebook founder] Mark Zuckerberg’s personal senator.” Ms. Quick came back later in the debate to point out to Mr. Trump that the quote appears on his campaign website.

Where he excelled: He appeared to have done his homework on the other candidates tonight. Early on he brought up Ohio Gov. John Kasich’s past ties to Lehman Brothers and the financial crash (he got some details wrong, but he tried). He was also much less combative than he has been off the debate stage.

Where he floundered: He’s just so boring in the debates. He seems listless. I get that he has the temperament of a surgeon, but when he’s competing against nine other candidates on that stage for attention, he’s got to be more assertive.

Where he excelled: That being said, when he does speak, it resonates with voters. He’s now second in the polls and ahead of Mr. Trump in some state polls. It must be that calm demeanor that bores me so much, because he remains calm and collected without speaking to people in a condescending or lecturing tone.

Where he floundered: He avoided a straight up question about whether he hated his job. Earlier this week he said in an interview that he doesn’t “know that ‘hate’ is the right word,” but that he is “frustrated.” He avoided that answer by responding to a separate question about his voting record, noting that past Democratic presidential candidates have missed higher percentages of votes than he.

Where he excelled: He pointed out media bias – that’s always a win in conservative circles. He also shut down the discussion of his voting record – and former Florida Gov. Jeb Bush – by pointing out that Mr. Bush said he would model his campaign after Arizona Sen. John McCain’s 2008 presidential campaign, but didn’t seem to find an issue with Mr. McCain’s voting record.

“The only reason why you’re doing it now is because we’re running for the same position, and someone has convinced you that attacking me is going to help you,” Rubio said.

Where he floundered: The only person who had less speaking time than Mr. Bush was Kentucky Sen. Rand Paul. Compare that to having the second-highest speaking time in the first two debates, and Mr. Bush’s fall from being an establishment frontrunner to middle of the pack becomes very prominent.

Where he excelled: His answer to the very first question about his greatest weakness was more honest than any of the other candidates. He actually gave a weakness: He’s impatient, and the presidency calls for patience.

Where he floundered: Mr. Cruz was asked a question about the recent debt limit vote, and instead talked about media bias. He then argued with the moderators when they wouldn’t give him additional time to answer the question he didn’t answer in the first place.

Where he excelled: But pointing out media bias and taking on the moderators for their leading – and divisive questions – to each of the Republican candidates, versus how moderators for CNN treated the Democratic candidates by asking actual policy questions, will play well with Republican voters. CNBC moderator John Harwood began the debate by asking Mr. Trump if he was a “comic book” version of a presidential campaign, for example.

Where she floundered: She needs new material. She’s still using her canned responses she’s used the past two debates and during speeches. She also needs to focus on facts that won’t be easily disputed by the mainstream media. While it is true that 92 percent of the jobs lost since 2009 were lost by women, there are numerous caveats to that statement that make it difficult to pin on President Obama.

“Crony capitalism is what happens when government gets so big and so powerful that only the big and the powerful can handle it,” Ms. Fiorina said.

Where he floundered: Was he there tonight? Other than the blimp comment and pointing out he was wearing a Trump-brand tie, he was invisible.

Where he excelled: He compared the American government to the runaway blimp that terrorized Pennsylvania earlier in the day, and it was his most (only) memorable line of the night.

“I mean, what we had was something the government made – basically a bag of gas – that cut loose, destroyed everything in its path, left thousands of people powerless, but they couldn’t get rid of it because we had too much money invested in it, so we had to keep it,” Mr. Huckabee said.

Where he floundered: I took notes for this article throughout the night. I had nothing written down for Mr. Paul (or Mr. Kasich), that should tell you something about their performances. Mr. Paul had the lowest speaking time of any candidate on that stage, and none of it was memorable.

Where he excelled: I guess he was on point about auditing the federal government, and that will play well with a certain subset of Republican voters.

Where he floundered: He also had a forgettable performance. The candidates weren’t given an opening statement, but were asked to identify their weaknesses. Instead of giving an honest and possibly endearing answer to the question, Mr. Kasich just gave an opening statement.

He also attacked his fellow candidates, which led to Mr. Trump noting that Mr. Kasich was doing so because “his poll numbers tanked.”

Where he excelled: Well, he certainly came out swinging.

Where he floundered: He gave a muddled answer on energy. He somehow suggested that America needs to invest in all energy options while simultaneously suggesting the government shouldn’t be the one investing. He brought up his home state of New Jersey and how the state government worked with the private sector to increase solar panel usage, but that included government incentives, something not palatable to Republican voters.

Where he excelled: His answer to criminal justice was perhaps the most clear and formidable response of the night. Pointing out that President Obama prosecuted Gen. David Petraeus but not GM executives.

He also had a sober response to a question about fantasy football and whether the federal government should regulate the game (yes, that was actually asked).

“We have $19 trillion in debt. We have people out of work. We have ISIS and al Qaeda attacking us. And we’re talking about fantasy football?” Christie said.

He also had a nice quip after being interrupted repeatedly by CNBC moderator John Hardwood: “Because, I’ve got to tell you the truth, even in New Jersey what you’re doing is called rude.” 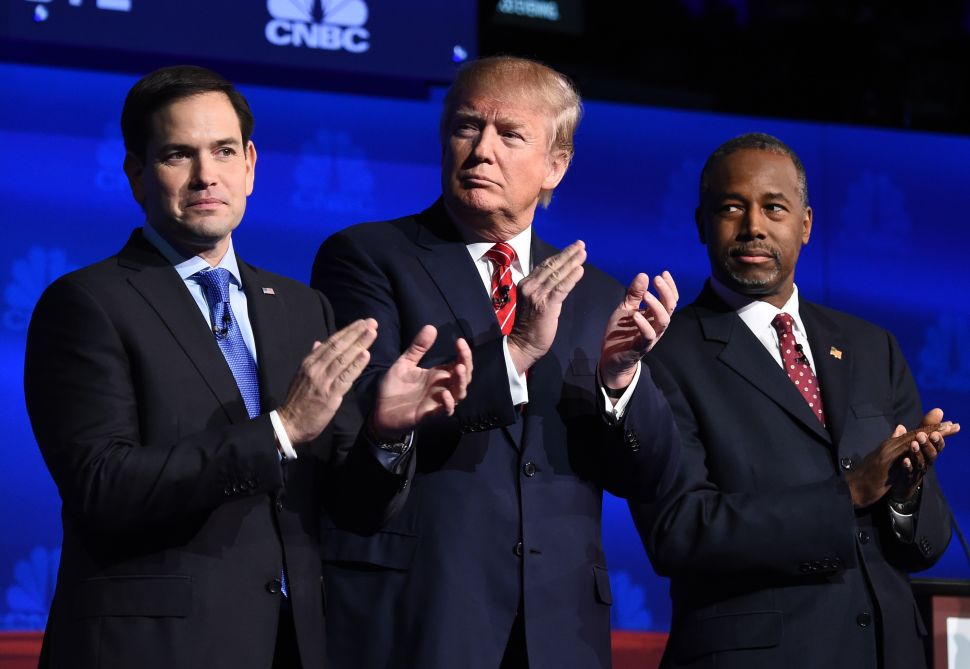