Alec Monopoly might be the fashion world’s most in-demand graffiti artist.

Times Square may not be every native New Yorker’s ideal neighborhood, but the bright, chaotic thoroughfare marked a high point in the graffiti artist’s career when his collection with Forever 21 debuted there in August.

“Alec Monopoly” is the alias of the unidentified graffiti artist who grew up in New York and Long Island, and whose work uses motifs from classic board game to make social commentary. Now having appeared in multiple galleries in addition to outdoor surfaces, his pieces explore controversial themes such as healthcare deficiency and police brutality.

His career took a unique turn, though, after he made a deal with DreamWorks that resulted in a limited-edition collection of men’s and women’s clothing and accessories for Forever 21.

“For a while I was just doing graffiti and focusing on graffiti and gallery work, and I really hadn’t pursued doing fashion at all. But, then, I was approached by DreamWorks and Forever 21 about the collaboration: it just felt right,” the now-Los Angeles-based artist told the Observer. “It was an amazing opportunity for me because it’s always been a dream of mine to be in Times Square and do some artwork there and then be on the teleprompters, on the screens.”

“Keith Haring‘s a major inspiration for me, and I remember—I was a child—seeing a picture of him in Times Square,” he continued. “His baby icon was up on one of the main teleprompters there. So that’s why I was so interested in doing it, because that sounded so amazing for me.”

One prominent figure in Alec Monopoly’s Forever 21 collection is the character Richie Rich, who has made frequent appearances in the artist’s past work.

“I have been working with Richie Rich characters and doing graffiti of Richie Rich for a number of years now and I really like his character,” the artist said. “He’s very positive and happy; to be able to use that in the Forever 21 line was really cool.”

The collection is comprised of comfortable street wear, which makes sense, given Alec Monopoly’s line of work. “I’m a graffiti artist and my work is in the street,” he said, “so I think it was appropriate to have street wear.”

The integration of his street art into the line is obvious upon a first look at the collection. “I do a lot of different graffiti tags in different colors for backgrounds on canvases,” he said. “I make a canvas, and I want it to look like the street, bringing the street inside. You can see some of the graffiti tags and backgrounds in some of the clothing.” Mr. Monopoly noted a black t-shirt in the line that he was particularly fond of that features gold graffiti tags. “I love gold and black. They’re cool colors that I used in my artwork and I wear, as well.”

Alec Monopoly has much on the horizon during the coming months, working in the museum space as well as continuing to work in the design industry. He recently did his first museum show at the Museum of Contemporary Art in Thailand, and he just signed a deal for another at the Museum of Art and Design in Singapore.

He will also be working on designing a chair, as well as a the design of a new Rolex watch—the latter sure to be a fascinating fusion of street art and luxury style. He has no doubts about the style side of his career, though, saying, “I’ll definitely be doing more fashion in the future.” 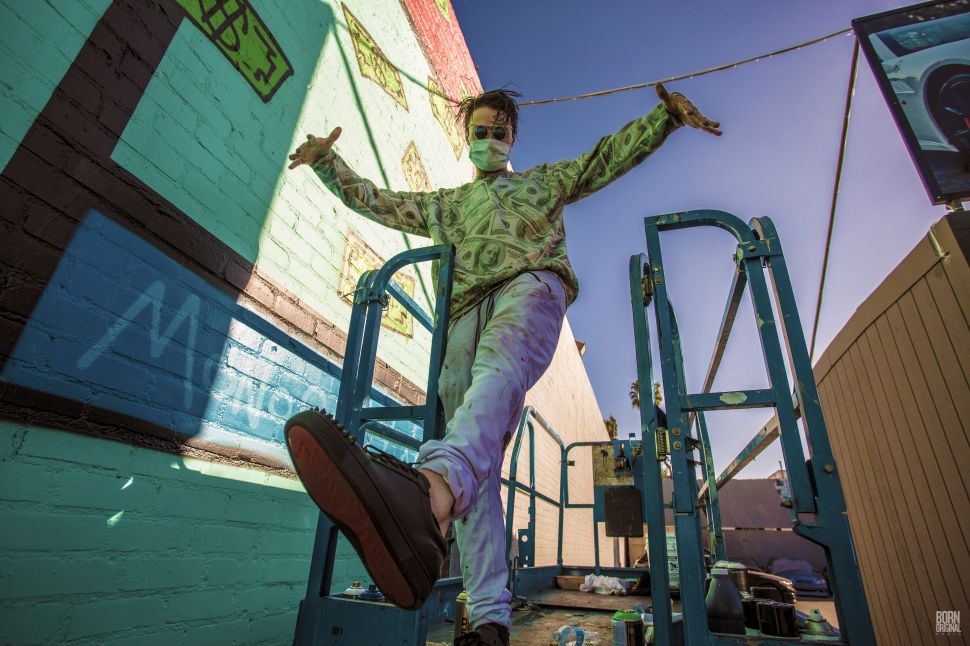