By day, Peter King is a Long Island congressman, a Republican known for his hawkish approach to foreign policy and pleas for moderation in an increasingly conservative House.

Mr. King, like many local elected officials, has cheered on the Mets as they’ve felled the Los Angeles Dodgers and Chicago Cubs on the way to their first World Series appearance in 15 years. But Mr. King is not content to simply put out a statement of appreciation, like Gov. Andrew Cuomo, or tweet his reactions to stirring Mets plays.

No, Mr. King is doing something a little more ambitious: releasing, from his campaign account, paragraphs of personal reaction to every twist-and-turn in the Mets’ magical postseason run, penning the equivalent of an exuberant, yet introspective, sports blog. (Uncredited photographs of the Mets are included.)

After the Mets clinched the pennant in Chicago on Wednesday, Mr. King wrote his sixth Mets missive to date, a four paragraph-long, 500-word catharsis for the tortured baseball fanatic lurking inside.

“The champagne flowed in the New York Mets clubhouse last night as this team of destiny celebrated its 8-3 win over the Cubs which clinched the National League pennant and completed a four game sweep of a team which had taken all seven games from the Mets during the regular season,” Mr. King wrote in a piece entitled “Mets Beat Cubs 8-3; Clinch NL Pennant.”

Mr. King opined that “barely three months ago virtually no one thought this was remotely possible.” But, the congressman said, it all came together in “an eclectic congruence of events and a unique melding of players with strong character and unique abilities.”

“There was the acquisition of Yeonis [sic] Cespedes and the non-trade of Wilmer Flores. The return from the disabled list of the Captain David Wright,Travis D’Arnaud and Steven Matz. The startlingly effective pitching of DeGrom, Harvey and Syndergaard,” he wrote. “The lights out relief pitching of closer Jeurys Familia and the steady arm of the ageless Bartolo Colon. The power surge of Lucas Duda. Through it all was the effective hitting of Daniel Murphy, the steady play of the season’s most consistent player the classy Curtis Granderson and the steady, patient leadership of Manager Terry Collins.”

Mr. King, detailing all the ways the Mets scored runs in their 8-3 win, wrote that the “pennant clincher over the Cubs was the Mets season in microcosm.”

He was certainly prescient. Following earlier Mets wins against the Cubs, he proclaimed the Mets to be “truly on their way” and a “team of destiny.”

“This team is for real. The 2015 Mets are a team of destiny. Let’s Go Mets!!” Mr. King wrote. He would add in another dispatch that this version of the Mets was better than any since 1969, when the ragtag franchise won their first ever World Series.

“This postseason the Mets are playing as well as a team can play. This is baseball at its best. Certainly the best I’ve seen in New York since the 1969 Mets!”

What about the 1986 Mets, the rowdy, drug-fueled 108-win juggernaut? Mr. King did not have much to say about them.

All, of course, was not always peachy for the congressman. In game two of the Division Series against the Dodgers–Mr. King poignantly noted he grew up a Brooklyn Dodgers fan before they fled to Chavez Ravine and broke his heart–Dodgers second baseman Chase Utley slid into Mets shortstop Ruben Tejada, breaking his leg and ending his season.

The Republican cheered on Major League Baseball after it tried to suspend Mr. Utley. Reflecting on his hometown allegiance, Mr. King wrote that he “knew where his loyalties were as he sported a Mets jacket on the field before Monday night’s Game 3 of the National League Division Series at Citi Field.”

Resilience was the lesson Mr. King sought to impart on his favored squad. “You can’t cry. You’ve got to go out and win.”

Mr. King then turned inward: “I was up until 2 o’clock in the morning, watching the game, watching the commentary, texting with friends of mine.”

For reasons unclear, Mr. King wrote here in the third person, not first. “Not surprisingly, King thinks Major League Baseball did the right thing when it suspended Dodgers’ second baseman Chase Utley for two games for breaking Mets shortstop Ruben Tejada’s leg with a hard slide in Game 2. The suspension is on hold pending an appeal.”

Like another Long Island literary light, Thomas Pynchon, Mr. King was undaunted by the sudden digression, pivoting in the same dispatch from rage at a dirty play to appreciation for Steven Matz, the Mets rookie pitcher who hails from Suffolk County.

“Matz is phenomenal,” Mr. King gushed about the 24-year-old rookie. “Where does a guy get that kind of ability? What gets me is they’re counting on him as if he was a superstar. He’s only pitched like five or six games. To have that much confidence in that kid, he must have really shown them something.”

And long before Mets second baseman Daniel Murphy clubbed four homeruns in the NLCS in one of the great postseason performances in baseball history, Mr. King saw an immortal-to-be following Mr. Murphy’s heroics against the Dodgers.

“Daniel Murphy forever enshrined himself in the pantheon of Mets’ heroes by knocking in his team’s first run with a long opposite field double in the first inning,” Mr. King wrote in another missive. “…scored the tying run in the fourth inning on a sacrifice fly after stealing third base in a heads up play which caught the Dodgers flat footed; and homered into the right field stands in the 6th inning for what proved to be the winning run.” 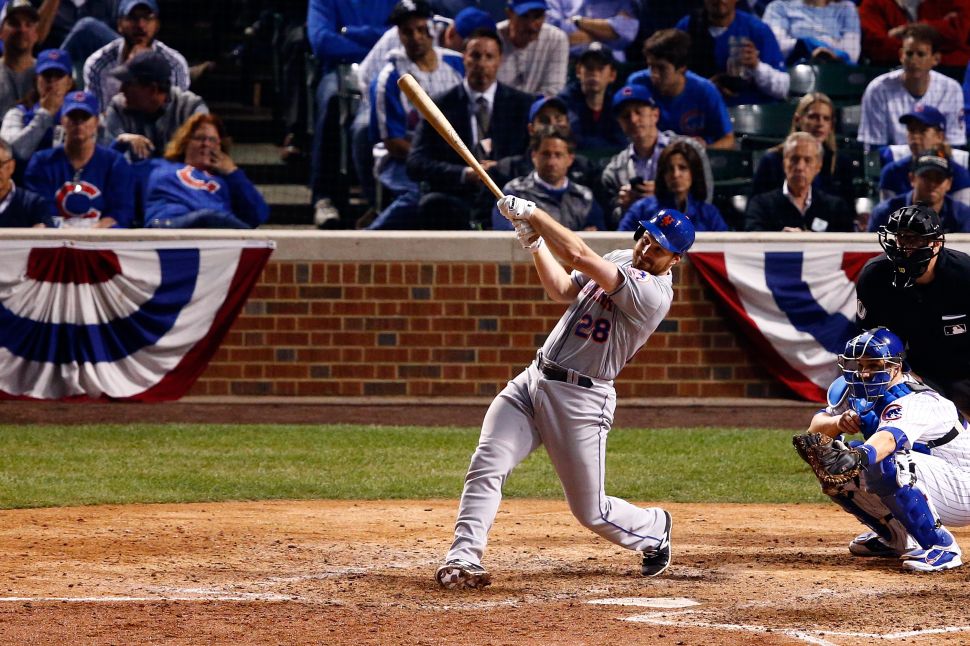