If the CIA’s Director John Brennan can’t keep his emails private, who can? Sadly, the fact that email and instant messaging are far more convenient than communicating via papers in envelopes or by actually talking on the phone, or (God forbid) face to face, these technologies are far more insecure. Could it be that the old ways protected both secrecy and privacy far better than what we have now?

The men and women in the United States government assigned to protect our nation’s most important secrets have good reason to quote Allen Ginsberg, the Beat poet who proclaimed, “The typewriter is holy.” For that matter so are pens, pencils, carbon paper and ordinary paper. In the digital age privacy as we once knew it, is dead, not just for ordinary citizens, but for government officials including, apparently, the head of the CIA—not to mention our former Secretary of State. Neither the NSA nor the U.S. military have been able to keep their secrets from being exposed by the likes of WikiLeaks or Edward Snowden.

While it is often reported that China (or Russia) was responsible for hacking into U.S. government systems, Chinese officials responded, “How do you know it was China?” Neither the U.S. media nor the government, which is trying to keep its own methods secret, have a good answer. Breaking into the Defense Department’s computers may be seen as an unfriendly act, to say the least, but as long as it is deniable, U.S. leaders seem publicly stymied by these activities.

One reason that our government, especially the military, is so vulnerable to hacking is the obsession with sharing sensitive data in real time or in near real time. If everybody with a security clearance has access to nearly everything, then exposures such as the one perpetrated by Chelsea Manning are inevitable. While the 9/11 attack occurred in part due to the failures of intelligence organizations to share what they knew about the terrorists, many of our intelligence failures since then are due to the government’s habit of sharing too much. According to one military source, “The more and faster we want to share the more vulnerable we become…”  Obviously, America’s leaders have not yet perfected the balance between information security and getting the right information to the right people at the right time. Will they ever?

Increasingly organizations and individuals are rediscovering the virtues of paper. Non digital media are simply invulnerable to hacking.

In spite of massive sums of taxpayer cash spent on cyber security by the U.S. government, we know that huge amounts of secret data have been stolen by foreign governments, including China, Russia, plus cybercriminals and others. A senior officer makes the point, “Did the old way cost less in the long run? The old way was certainly more manpower intensive and that came with much higher labor costs. However, how much value have we lost through hacking and how much will it cost to make the system truly hack proof? Nevertheless there is an enduring sense that nothing can render a cyber-system truly hack-proof.”

Given America’s failures to protect our own secret information, one hopes and wishes that the U.S. is as successful at stealing information from our potential foes as they are at stealing from us.

In the private sector, hackers steal information from countless companies, ranging from Target to Ashley Madison. The banks rarely let on how badly or how often they are victimized by cybercrime, but rumor has it that it is significant. At least for now, the incentives for making and selling effective cyber security systems are nowhere near as powerful as the incentives for building systems that can steal secret or private information from individuals, as well as from corporations and governments. In the digital age, privacy is gone.

Increasingly, organizations and individuals are rediscovering the virtues of paper. Non-digital media are simply invulnerable to hacking. Stealing information from a typewriter is harder than stealing it from a word processor, computer or server. A physical file with sheets of paper covered in words written either by hand or by typewriter is a safer place to store confidential information than any electronic data storage system yet devised.

There are no doubt some systems built by privacy fanatics such as the Tor Project or by extraordinarily well-funded organizations such as US Cyber Command, that are difficult to break into. However, an exceptionally secure system is now regarded nowadays as just another challenge for the hackers in China, at the NSA or in some obscure basement in San Jose, Calif., Chengdu, China or Moscow.

Theoretically, electric typewriters should be harder to compromise than systems that are, or can be, connected to the Internet. But they are certainly not invulnerable. In the 1970s, the Soviets managed to bug a number of U.S. government IBM Selectric typewriters using so-called “keystroke loggers.” There is certainly no reason to imagine that the low cost electric typewriters currently on sale at places like Staples are any less susceptible to being compromised than the more expensive I.B.M. models were 40 years ago.

At the moment, the most secure and, at the same time, usable, method of creating, sharing and storing information is to write it up on a manual typewriter and store it in a locked filing cabinet or send it in an envelope via the good old USPS. This is not a perfect system. It’s certainly vulnerable to burglars or to government agents armed with a warrant, but it may be better than anything else that is available to the general public, or, for that matter, to corporations or government agencies that truly wish to protect their secrets.

The aforementioned senior officer explained: “You remember the movie Space Cowboys that brought old astronauts back to save an old Soviet satellite from destroying the world? I imagine we will soon put together teams of old, gray-haired administrators and secretaries to recreate the old manual way of doing business. I call them ‘Office Cowboys.’ “

A quick Google search shows that few, if any, brand-new manual typewriters are available. It would appear that there is a market opening for some firms to start building new, high-quality machines. Perhaps someone could revive the old Swiss brand of Hermes typewriters: I’ve still got the one my parents bought me in the early 1970s and, thanks to some smart repair work done about 20 years ago, it still works fine and keeps my private correspondence private. 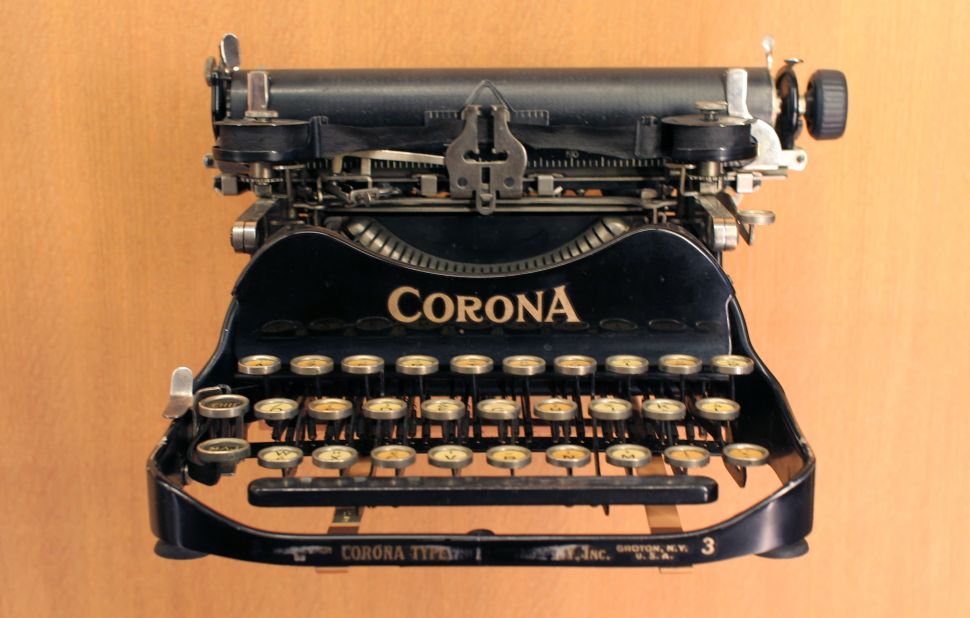