Reddit has had an unenviable year, with a founder’s hiring decision yielding the resignation of of its CEO, scrutiny around which shone a light on its worst corners. Meanwhile, the bean counters raise questions about whether or not the 10 year-old company can ever make any money and whether or not it’s problematic that the company depends heavily on unpaid workers.

Kevin Rose, the founder of Digg, has even suggested Reddit might give up and become a nonprofit.

Into this context comes a brand new startup called Topick, which opens its beta to the world today. The three-person team believes it can update the neglected online forum, delivering the latest technology and the benefit of hindsight into what went wrong with previous failed fora.

“There’s a kind of system failure in conversation,” Maxime Leroy, one of the company’s two co-founders, told the Observer during an interview yesterday. He said he basically wants to apply the principles that made redditors love Victoria Taylor so much to the whole site (she’s doing public radio now, by the way).

The Whole Earth ‘Lectronic Link (The WELL) claims to have launched the movement toward online community conversation, but the French might disagree. Either way, group conversations online about specific topics have not changed a lot since the first dot-com boom. Randall Munroe’s forum for the insanely popular XKCD is a fair example of where webforums have been stuck for some time.

Google created Groups which look like they just sort of hoovered up some local newspaper’s forum code and then turned it over to a recently graduated designer to spend for a weekend’s update and left it. Facebook has Groups, too. Their chief feature seems to be “being on Facebook.” They are hobbled by Facebook’s universally frustrating search functionality and the weirdness of airing your conversations so close to your personal life.

It’s hard to come off as an expert when there are photos of your kid shoving cupcakes in your face just a couple clicks away, as Mr. Leroy pointed out.

Topick, he argues, can improve the languishing user experience of online conversation by making its case to users, potential investors and business partners around the quality of engagement rather than the quantity of users. He believes that by setting its goals around engagement, and not signups, the company can earn a reputation for quality online discussion. And, therefore, convince people to come back.

Here are some of the features that Mr. Leroy believes will make a difference for the site:

It all sounds a little utopian. Having watched a lot of these communities in the past, it often seems like their success is often linked to the degree to which they permit hostile talk, homogeneous groups and alienating dialogue.

In fact, in talking to a GamerGate supporter during some recent reporting, it became apparent that, underneath all the issues of “social justice” and “ethics in journalism” driving much of the fury in that group, an underlying frustration surfaced: the fact that so many websites are shutting down forums and comment sections. The right to comment in any way a reader wants appears to be a unifying principle of the cause.

Topick aims to appeal to the majority that finds hostile commentary distasteful.

On the product side, Mr. Leroy emphasized shareable posts, responsive design, a user specific front page that crosses all his or her forums and introducing mobile apps next year.

By creating a bespoke front page on the site for users, Topick aims to save users time. In forums today, users always have to visit each forum to see the latest conversation. Topick will aggregate the best posts from each of a users’ forums on its front page. 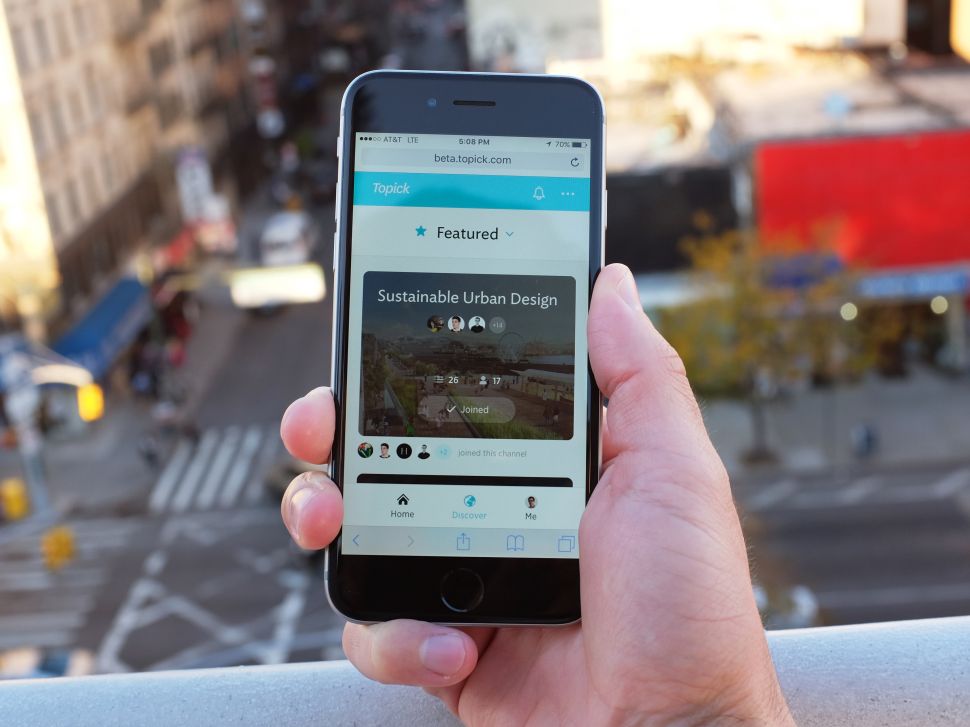