“The word luxury is one of the most overused in real estate—just like location,” Jonathan Miller, co-founder and CEO of Miller Samuel, told the Observer.

The current state of the high-end sales market in the city seems to agree. While Douglas Elliman’s third-quarter market report shows that overall, city housing prices have increased to their highest level since the financial crisis in 2008 (number of sales increased 9.8 percent in the third quarter), the super-high-end is lagging behind. Luxury median sales prices rose 10 percent from the year ago quarter, but the average sales price and average price per square foot decreased 6.8 percent and 6.2 percent. “The challenge right now is the demand is not as frenzied as it was a year ago or so,” added Mr. Miller, who puts out the Douglas Elliman report.

“We don’t have the momentum we had, so we’re just going to have to get going here,” concurred Kirk Henckels, vice chairman of the venerable brokerage Stribling.

Seller pricing expectations are a hurdle. Ken Griffin’s alleged new $200 million apartment in 220 Central Park South doesn’t mean that a $5 million listing is suddenly worth three times as much, despite what eager sellers may tell themselves.

“People are hearing about a $100 million sale, and soon their $20 million property starts to feel like it’s worth $50 million, but it’s really worth $20 million,” Mr. Miller noted. “That’s a key characteristic of luxury space, whereas the balance of the market is faster paced and restrained by lack of inventory.”

At the same time, the “super luxury” category (One57) has become something of a separate entity from the luxury market, so knowing your audience is important. “The prewar co-op on the Upper West Side has nothing to do with Billionaire’s Row,” Halstead broker Brian Lewis told the Observer. “It’s an entirely different thing.”

“Sellers cannot get cocky about the fact that there is a limited inventory and buyers are really fueled by cheap money right now. It doesn’t mean buyers are stupid—I’ve yet to meet a stupid buyer in the city,” he said.

“There are two things, side-by-side: the resale market, which is under price pressure from not keeping up with demand,” said Mr. Miller, “and on the other side, this new development, which is targeting a fairly tight bandwidth.” 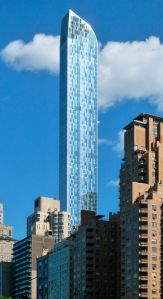 The poster child of luxury condos, One57. (Extell Development)

“Something concerning about what we’ve done to ourselves is that there are almost a hundred apartments—co-ops and condos—listed over $30 million right now,” Mr. Henckels noted. “The big question you’re starting to see developers with new product coming out respond to is ‘how many $10-million buyers are out there?’ ” said Mr. Miller.

Developers are finding that a substantial number of those buyers are foreign, and while a number of economic and political factors (currency destabilization in China, and the stronger dollar against the euro, to start) have made it a bit more expensive for them to buy property in the city, New York’s comparative stability as an economic investment remains appealing.

“The rumblings in the financial market seem to have encouraged people,” said Mr. Henckels, “because the United States is still relatively safer than the other countries.”

Mr. Lewis noted that in his experience, “foreign buyers are driven by brand…they like tried and tested. I can talk about 520 Park, I can talk about that being like the Pierre, the classic presentation right by Barneys,” Mr. Lewis said.

“It’s not that they’re shallow; they just don’t have the learning curve time. They need to put their money somewhere, and they know [the city] is a good choice. They want a brand they trust,” Mr. Lewis added.

Additionally, some have questioned if the highly saturated new development market might finally be peaking. For Mr. Miller, the next few years will be something of a race between these new buildings.

“One57 was really the first of its genre. They were the first in, and were lucky with market timing and type of product they were offering,” he noted. “Now, according to research, they are averaging something like one sale a quarter,” he continued. “From what I’m reading, they don’t seem to be in a hurry.”

“If you were building that today, with the cost of site, you wouldn’t have that luxury of time,” Mr. Miller opined.

Interestingly, the “location, location, location,” mantra has morphed to a whisper. “At least in the super-luxury space, it is less about location than it ever has been—it is more about the view,” Mr. Miller said.

Well, at least for some. “I think condo people aren’t as sensitive about location—I think co-op people still are,” Mr. Henckels added.