At a calamitous time for journalism, when every day brings another little death to a once noble, courageous and respectable profession that is slowly being crushed in a blogosphere of junk, it is rare to see a bold, respectable and truthful movie get financed about the news. Miraculously, there are suddenly two. Tom McCarthy’s forthcoming Spotlight is a brilliant, incisive film about the 2001 Boston Globe investigation of the Catholic Church’s sex-abuse scandal that won a Pulitzer Prize. Meanwhile, we have James Vanderbilt’s aptly titled Truth, about the ill-fated 2004 exposé on 60 Minutes about George W. Bush’s alleged draft-dodging shame that called on powerful friends in the military to protect him from serving in Vietnam.

It was a scandal many people believe to be true to this day, but at the time it was broadcast it set off a tsunami of criticism that ended the spectacular career of trusted news anchor Dan Rather after decades at CBS and led to the downfall of his award-winning producer Mary Mapes, who was unceremoniously dismissed from one of the most respected positions in television news. Mr. Rather later sued the network and lost, inviting further disgrace. The movie, based on a memoir by Ms. Mapes, who has since won a coveted Peabody Award, is one of the best movies of the year. It arrives with the full blessing of Mr. Rather, who praises its “total accuracy” as well as Robert Redford’s white-knuckle, no-frills performance at the center of the controversy and Cate Blanchett’s passionate portrayal as hard-nosed, slavishly professional producer Ms. Mapes. The loser is CBS, which failed to stand by their biggest network star or give him a chance to apologize on the air for a mistake that was clearly not his own. The logo network eye, in retrospect, looks bloodshot from cowardice.

After years of brilliant on-camera reportage that broke important news stories, exposed eye-opening scandals and headline, hard-to-get interviews that went viral, Mr. Rather and his producer fell on a tip Ms. Mapes calls a “juicy piece of brisket” about President Bush’s military corruption like hungry carrion birds. The movie takes you behind the scenes to closed-door sessions that reveal how the president accepted credit for accomplishments while playing hooky from actual duty, how he was granted a discharge from the National Guard nine months early and how he paid people off and used his influence to avoid combat.

The movie names real names, but their error was not checking those names more meticulously. After Mr. Rather broadcast the story in good faith on September 8, 2004, on the eve of an election, right-wing accusations surfaced claiming the signatures on the military service records were forgeries. Mr. Rather thought CBS News would protect him and stand behind their veteran anchor. They didn’t. The research and analysis of the damning documents is painstakingly recreated in director Vanderbilt’s exhaustive screenplay, but it’s too late now to make much difference. The public has already lost interest.

And so it goes with network news. Today’s scoop is tomorrow’s Nielsen rating. Does anyone remember what embellishment turned Brian Williams into a New Age fall guy? They only know he fell from grace with a resounding thud and wonder how long it will take him to make a comeback. In Truth, CBS even banishes the entire 60 Minutes production crew from the building. I wonder if NBC did the same thing to Mr. Williams. Meanwhile, this is a film that shows the internecine beehive activity that gets a story on the air “live,” delves into the frustrations news shows go through when they are pre-empted by their own network for inconsequential money-making “specials,” and asks pertinent questions about the future of network news, which, according to the Rather-Mapes team, is no longer about telling the truth—it’s about money, stock market shares and profit margins.

Mr. Redford doesn’t look like Dan Rather, but displays the same dedication to—and respect for—journalism that he brought to the role of Bob Woodward in All the President’s Men. Cate Blanchett brings more galvanizing intensity to the role of Mary Mapes—intelligent and organized even under crippling pressure. The defense team she puts together when she faces the CBS firing squad—including Dennis Quaid as a former Marine commander, Elisabeth Moss as a journalism professor and Topher Grace as an idealistic researcher—reaches far beyond the usual casting choices. Bruce Greenwood is excellent as the beleaguered head of CBS News, and so is Stacy Keach, as the dodgy retired colonel who provides Mapes with the questionable documents that cause the trouble and then tries to recant. The film is in all respects careful and cognizant of the need to discern fact from fiction.

Truth proves that journalism is not a science, but a medium hanging on by the seat of its Brooks Brothers pants, subject to scrutiny and error just like computer technology, only so much more riveting. The movie is careful not to take sides or humiliate the Bush family further, although the story is still alive and kicking. Recently, six hot documents that have been kept secret since the 1970s turned up, written by Bush’s commander, the late Lt. Col. Jerry B. Killian, that claim the old record of the former President’s military service is indeed nonexistent, thanks to his family’s connections. Time for another 60 Minutes piece, anyone? 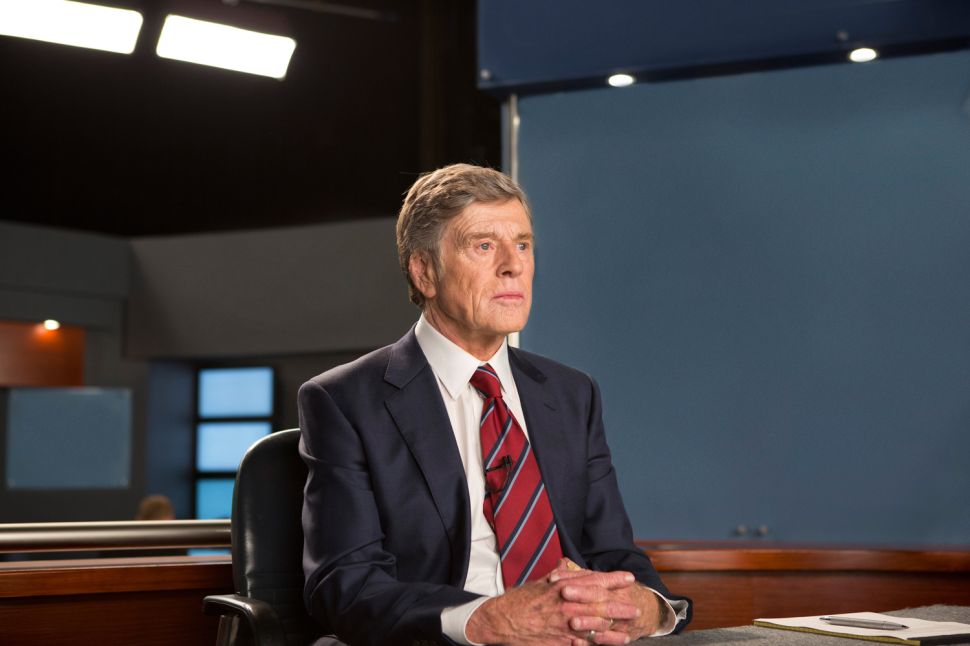