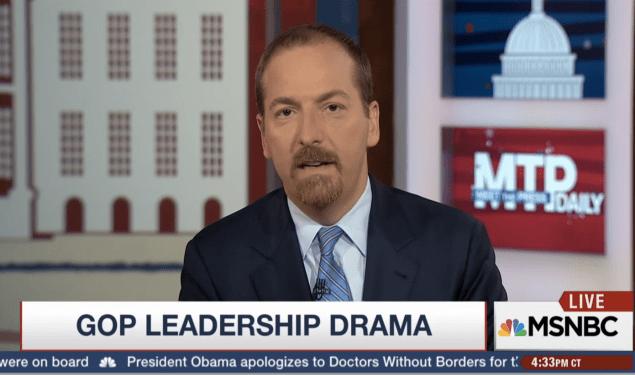 Chuck Todd got so giddy he could barely spit out the words Thursday afternoon.

Mr. Todd’s garbled sentence described the new show MTP Daily, the initials for Meet the Press. It is an MSNBC cable offshoot of a legacy program that has been a Sunday morning franchise on NBC since the dawn of television. Mr. Todd is the current Sunday host, as well.

MTP is in its second week in the one-hour time slot at 5 p.m., Monday through Friday. It shows promise, especially when there is immediate and important news, as there was Thursday when Rep. Kevin McCarthy (R-CA) withdrew from the race for speaker of the House of Representatives.

Mr. McCarthy was favored until he implied to Sean Hannity on Fox News that the special committee investigating the four murders in Benghazi intended to damage Hillary Clinton in the presidential race. That was far too much candor for his conservative colleagues.

With no clear successor in line to replace the retiring John Boehner, Mr. Todd was able to whip around to various correspondents and guests who discussed the dangers the party faces and possible successors.

U.S. Senator Lindsey Graham, a South Carolina Republican and presidential candidate, said: “If we have a meltdown in the House and we can’t govern the House, then it’s going to hurt our chances to win in 2016.”

Joe Scarborough, a right-leaning ex-Congressman who co-hosts MSNBC’s morning show Morning Joe, materialized to say, “Lindsey has a good reason to be terrified.”

Mr. Scarborough nominated the losing vice-presidential candidate of 2012. “Paul Ryan’s going to have to step up,” Mr. Scarborough said of the Wisconsin rep. “He does not have the choice.”

In an aside, Mr. Todd noted that the new speaker does not need to be a member of Congress, saying he’d heard the name of former Vice-President Dick Cheney.

Why not go further? There’s radio oracle Rush Limbaugh, the de facto id of the GOP. After all, he likes to speak, he opines on all things, he never lies and he’s always right. Or maybe Stephen Colbert?

Mr. Todd, the host, in an inside-the-Beltway politics wonk who skews his show toward government stories. His “MTP” is an important piece of the re-branding of MSNBC from progressive panels in the day hours to serious hard news, more to compete with CNN than with Fox News. Steve Kornacki will sit in for Mr. Todd on Mondays.

MTP brings a certain gravitas, with Todd narrating some news over that familiar, portentous, heavy string music. Todd so far has used the early part of his show to trot out NBC News stars and quiz them on what big stories they’ll have on NBC Nightly News “in just about 90 minutes.” This is synergy.

One downside to the show’s concept is its daily-ness. The big dog’s gotta eat and sometimes there is not much there, as on Wednesday, when there was little news.

That show was saved by color film of Robert F. Kennedy running for president in 1968 and giving a speech in Roseburg, Ore., the scene of last week’s gun massacre.

In that very same city, 46 years ago, Kennedy discussed guns and mentally ill and criminal people. “Is there anybody out here who thinks those people should have rifles or guns?” Mr. Kennedy said.

Shortly thereafter, Mr. Kennedy was murdered by a gun. More than some networks, NBC producers use archives for historical perspective, a good thing.

Another caveat for MTP is that it gets bumped off the air for big news. Last week, after the gun massacre in Oregon, Mr. Todd’s show was canceled and breaking news anchor Brian Williams took his place. Why not co-anchor? Mr. Williams is good at this.

In his time slot, can Mr. Todd can vanquish The Five on Fox or The Situation Room on CNN? Of all the competition, he has the best political connections, a good thing as a big election approaches.

His connections paid off last week when Russia moved into the Syrian civil war and Mr. Todd got a frustrated Sen. Bob Corker, a Tennessee Republican who is chairman of the Senate foreign relations committee.

After Mr. Corker said, “I think it’s pretty much over,” Mr. Todd asked him what advice he’d give President Obama if asked.

In talking for the next two minutes and 15 seconds, Mr. Corker said it was “a great question” and said Mr. Obama “figuratively jumped into Putin’s lap… Our feckless nation couldn’t even deliver trucks… We are reaping what we sow. I am very despondent.”

Interestingly, despite all the time and words, Mr. Corker never answered Mr. Todd’s question. Isn’t answering questions what you’re supposed to do when you meet the press?

CORRECTION: An earlier version of this story contained an incorrect first name for Sen. Bob Corker. 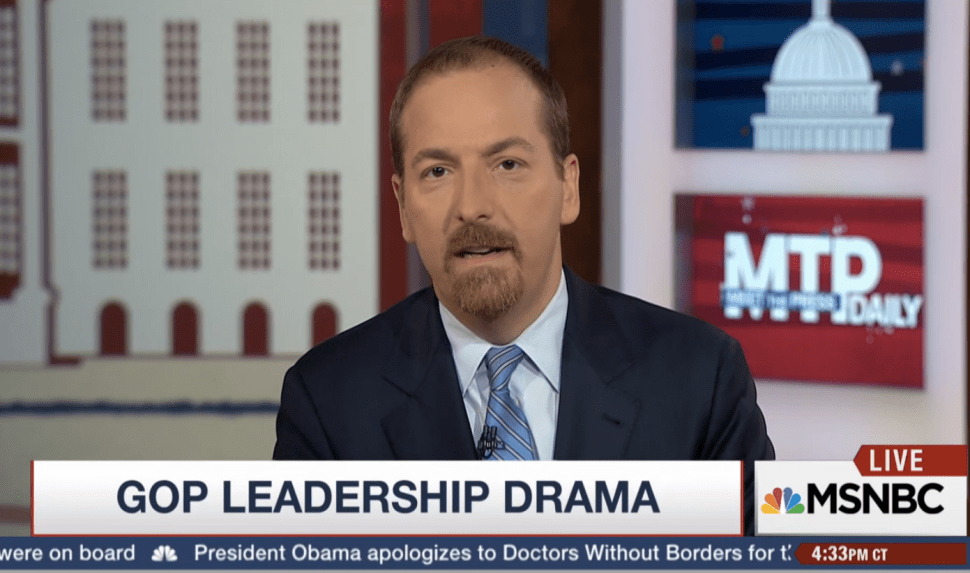