To protest the detainment of Iraqi journalist Mohammed Rasool, all Vice Media websites went dark at 10 AM today. The blackout is scheduled to last until noon.

Mr. Rasool was acting as translator for two British Vice journalists, Jake Hanrahan and Phillip Pendlebury, who were covering the conflict between the PKK (a group of youth nationals) and the Turkish government, when the trio was arrested in August. Though Mr. Hanrahan and Mr. Pendlebury were eventually deported, Mr. Rasool remains imprisoned on charges of aiding the PKK.

“The very existence of democracy depends on a free and thriving fourth estate,” Vice Media co-founder and CEO Shane Smith said in a video announcing the blackout.

The blacked out Vice Media homepage shows only the video about Mr. Rasool’s situation, a brief explanatory paragraph and a link to a Vice/ Committee to Protect Journalists Change.org petition urging Turkish President Recep Tayyip Erdogan to “Free Rasool.”

“Without journalists like Rasool, international correspondents would struggle to navigate foreign terrain, and world news would have little local context,” the petition reads. “Rasool’s imprisonment is a grave injustice.”

Vice also used #FreeRasool on Twitter to promote its cause.

The imprisonment of journalists has been an all-too common occurrence in the Middle East—three Al Jazeera journalists were detained in Egypt for more than a year, and a total of 221 journalists were jailed around the world in 2014. 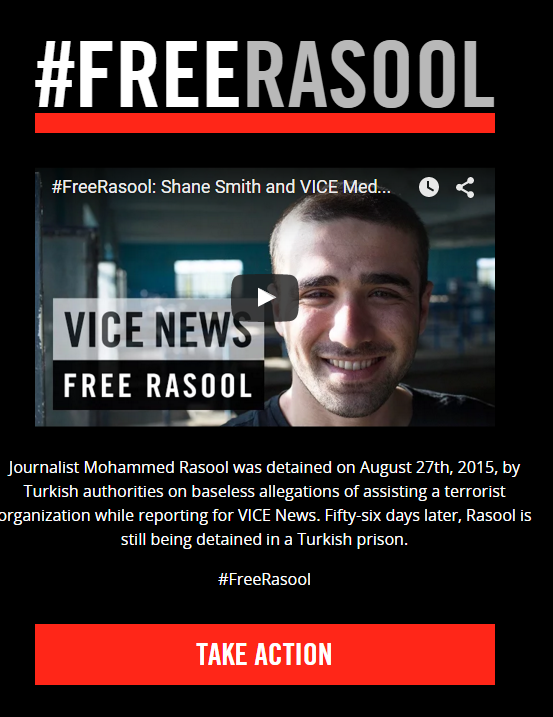