Former Vice President Al Gore today joined Gov. Andrew Cuomo in rolling out a new state initiative to reduce carbon dioxide emissions—and Mr. Gore asserted that the leaders in the environmental movement are not national governments but states and localities.

The former presidential candidate joined the governor at Columbia University to witness the signing of the Under 2 MOU, a general agreement between local and state governments to limit greenhouse gas emissions—which most scientists blame for the uptick in the overall global temperature and the increased incidence of extreme weather events—to less than two metric tons per capita. New York City, California and 40 international cities and provinces have already signed onto the deal, which Mr. Gore called an optimistic sign for the climate.

“We are winning this contest! We are winning this struggle! We are winning this debate,” Mr. Gore said, displaying a passion and ease he never summoned during the debates in his ill-starred run for the White House 15 years ago. “Some of the most dramatic progress that is actually pushing the nations along—I’m thinking of Ontario and Quebec—is coming from the state level and the provincial level. And now, with today’s announcement, we see the beginning of a entirely new era.”

Mr. Gore pointed out that India, China and the European Union had made major strides to reduce pollution, and argued pressure would be on all the nations of the world to follow along at the United Nations Climate Summit in Paris in November and December. He echoed arguments from some sources that everything from 2012’s Hurricane Sandy to ongoing flooding in South Carolina to the drought in California to the Syrian refugee crisis are a consequence of human-caused shifts in global weather patterns.

“Yes, there are other factors, but all of the experts are saying that this is just a taste of what would come if we don’t get our arms around this and get busy and solve this,” he said, noting that 100 million tons of greenhouse emissions enter the atmosphere daily. “We tell the big polluters, ‘you want a free sewage system for your waste? Just spew it into the atmosphere free of charge. It’s kind of like a giant sewer, we don’t care.'”

“If Al Gore had served as president of the United States, I have no doubt this nation would be in a better place,” Mr. Cuomo said. 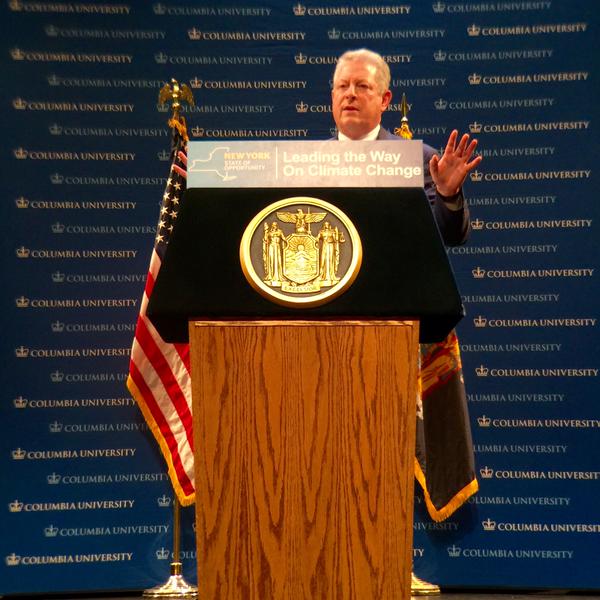