In truth, no battle for a major cause in the history of human rights has ever been won without pain and sacrifice, but what the suffering women in the suffrage movement endured to win the vote is almost inconceivable. International women’s suffrage in the 20th century is a historical episode without parallel. In the noble and riveting film Suffragette, the particular struggle in England is so painstakingly detailed, directed with dignity and an eye for myriad details by Sarah Gavron and written with meticulously researched pathos by Abi Morgan, that being won over by the honesty and triumph displayed by the women depicted in it is inevitable. The physical abuse and emotional anguish sometimes borders on overkill, but the final outcome is overwhelming.

London, 1912. Women who had always been taught they lacked the intelligence and reason to play a responsible role in government were beginning to show first signs of an active interest in the politics of a male-dominated society that treated them like chattel. Luminous Carey Mulligan gives an inspired performance as Maud Watts, a beleaguered wife and mother who has been working for poverty wages under toxic and backbreaking conditions in a primitive laundry since the age of 4. Her husband Sonny (another dedicated performance without frills by Ben Whishaw), who works in the same Dickensian factory, loves his wife, but the brutality and indifference of the men who are his peers have clouded his vision of how the women around him are treated.

Watching them burned, scalded, poisoned by lye and other chemicals, their fingers crushed in the machinery and observing the younger women victimized by sexual abuse, Maud slowly hears the complaints of her fellow workers as they echo the sentiments of England’s feminist leader Emmeline Pankhurst (a brief but powerful performance by Meryl Streep), who calls for a nationwide protest that ends in strikes, rioting in the streets, police barbarity, arrest and imprisonment.

Beaten, insulted and ignored by King George V’s all-male Parliament, women were worked like farm animals and jailed if they protested. As slow as a dripping faucet in need of a plumber, Maud defies her husband and adopts the watchcry of the women’s movement (“You want us to respect the law?  Then make the law respectable!”), losing her job, sacrificing her marriage and pleading to deaf ears when her little boy is torn from her arms and put up for adoption. The crowning achievement of Ms. Mulligan’s wrenching performance is the way she underplays her character’s emotional turbulence and keeps the melodramatics in check, showing how the contributions of Maud and women like her allowed women to take some small control of their own destiny.

Times have changed drastically since U.S. and U.K. women won the right to vote in the 1920s, but Suffragette sparks new interest in a controversial issue at a time when women continue to make headlines demanding equal pay for the same jobs as men. The theme is more relevant than ever. Lending forceful sincerity and persuasiveness to the history of the women’s movement is a perfect cast of distinguished players—Brendan Gleeson as the deputy police inspector with conflicting emotions about the way his charges are treated behind bars; a softer-than-usual Helena Bonham Carter as the chemist who faces harsh penalties for using her pharmacy as a secret meeting place for feminists; salty Anne-Marie Duff as a wife who suffers most from her husband’s bullying; and rapturous Romola Garai as the upper-class wife who gives up her participation in the movement, but never her loyalty or support, to protect her family reputation and social position.

As a period piece, Suffragette captures and preserves the pulse and passion of a past era, yet strengthens the vibrant urgency of a cause that continues to inform the future. 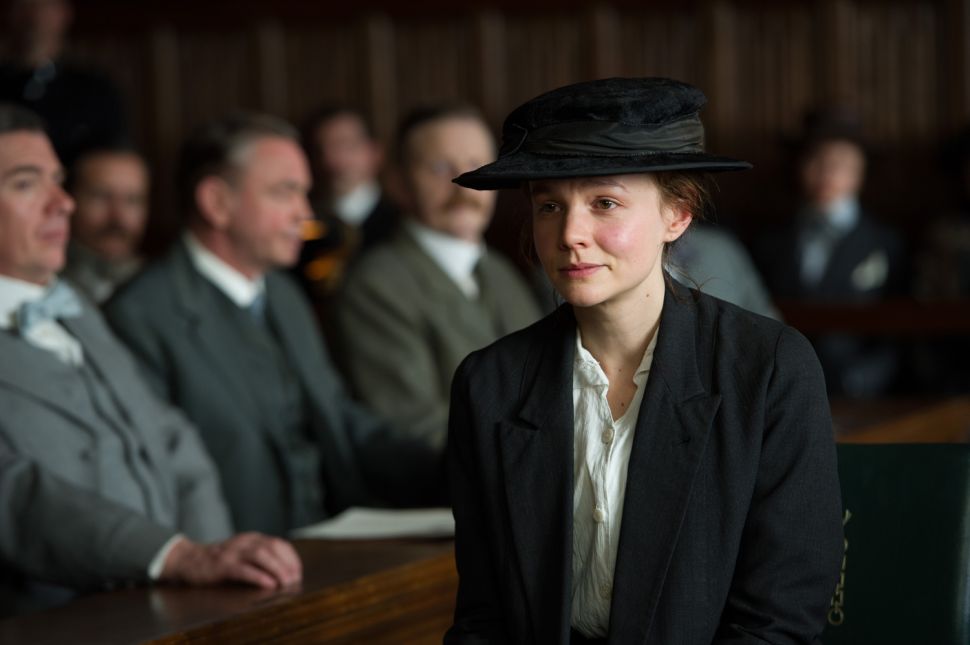