Kentucky Sen. Rand Paul’s presidential campaign appears to have all the hallmarks of a candidacy about to implode. His fundraising is weak, his campaign is suffering behind-the-scenes issues and he’s lacking the charisma needed to stand out in a still-crowded Republican primary.

To date Mr. Paul has raised $13 million among his campaign and super PACs, and just $2.5 million in the past three months. To put this in perspective, his rivals have earned double-digits in the past quarter. His campaign also appears to be burning through cash faster than it is raising it.

Mr. Paul’s polling numbers have also been declining – he currently clocks in at just 2.4 percent on the Real Clear Politics average. If he isn’t able to move up in the polls by Oct. 28, then according to CNBC’s debate rules, he’ll be relegated to the “kiddie table” debate all by himself. It’s an unlikely scenario, and he’ll probably be added to the main debate stage instead, but it shows the precarious position he has found himself in.

Once a shoo-in for the main stage debates and known as Time magazine’s “most interesting man in politics,” Mr. Paul is now teetering on the edge between top-tier candidates and lower-tier candidates. His supporters, wearing “I Stand with Rand” t-shirts, used to show up at other candidate’s events – even making an appearance at Sen. Ted Cruz’s announcement speech. Now, they’re rarely seen.

Behind the scenes, the campaign has dealt with inter-office conflicts, most notably the indictment of longtime aide Jesse Benton, who was charged with concealing payments made to an Iowa state senator while working on Ron Paul’s 2012 presidential campaign. Ron Paul is of course the father of Rand Paul.

Rick Wilson, a well-known and respected Republican strategist, when asked who he believed the next person to drop out of the 2016 election would be, immediately named Mr. Paul.

“I’m not sure Paul survives much longer. He’s a ‘live off the land’ candidate, not a guy with a lot of major donor love, and I think he’s probably looking at how the future unfolds with no possibility of wins in the early states,” Mr. Wilson told the Observer. “If he says he can ‘make more of a difference in the Senate’ it’s the equivalent of ‘I want to spend more time with my family.'”

Mr. Paul also took a significant hit last week, when Ed Crane, co-founder of the libertarian think tank Cato Institute and leader of one of the Kentucky senator’s super PACs, Purple PAC, told Politico he would no longer raise money for the candidate.

“I have stopped raising money for him until I see the campaign correct its problems,” Mr. Crane said. “I wasn’t going to raise money to spend on a futile crusade.”

The rumor mill has been surprisingly accurate in recent months, predicting the dropouts of governors Scott Walker and Rick Perry. But Mr. Paul and his camp insist they are in it for the long haul.

Mr. Crane, in a follow-up email with the Observer, asserted that Mr. Paul would not drop out and that he would continue fundraising for the candidate.

“I said it would be a futile crusade if he didn’t return to his libertarian roots, which I believe he is starting to do. I hope to raise significant funds for Rand this fall,” Mr. Crane said. “Right now I think Rand, [Carly] Fiorina and [Marco] Rubio are the most viable candidates for the GOP nod. All the others have fatal flaws. No way will Rand Paul drop out.”

Sergio Gor, a spokesman for Mr. Paul, had also noted in the same Politico piece that fundraising at the other two super PACS “remain active and ongoing.”

Mr. Paul himself insists he is not going anywhere, something absent from Mr. Walker and Mr. Perry when their campaigns’ obituaries were being written. During an appearance on Fox News on Sunday, Mr. Paul said the “rumors of my demise are somewhat exaggerated, to say the least.” He added that he was “in for the long haul.”

Perhaps the East Coast media elites have become cocky after accurately calling the demise of Mr. Perry and Mr. Walker and are overplaying their hand. Or maybe Mr. Paul and his team are desperately trying to hold on to a sinking ship. Either way, Mr. Paul’s campaign is going to need to do some serious damage control in order to right this ship. 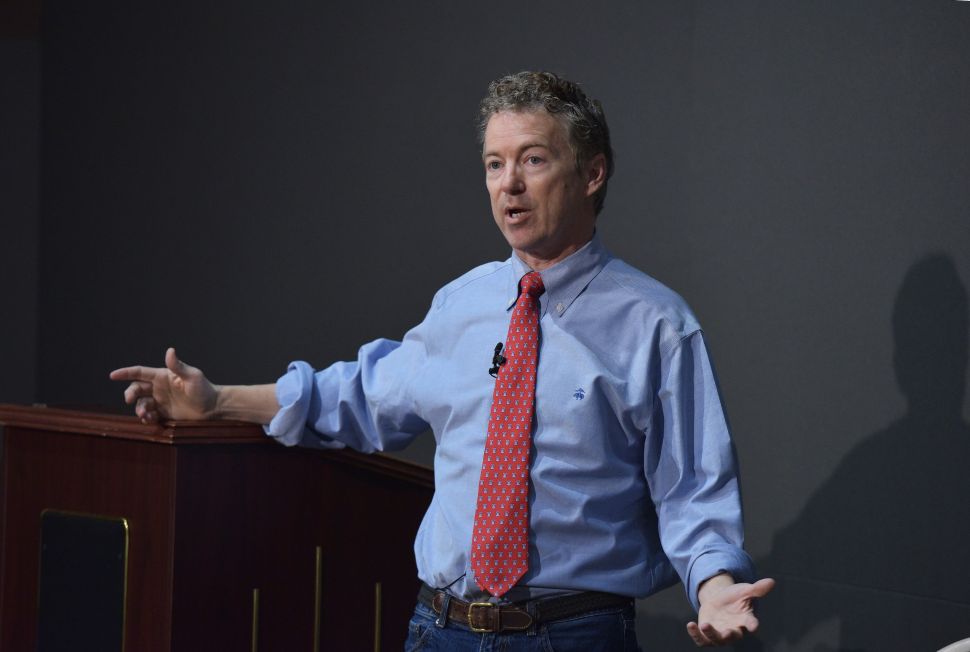