At last, Saudi Arabia’s dismal human rights record is getting media scrutiny, thanks in part to news that Saudi authorities plan to lash 74-year-old Karl Andree, a British cancer survivor, 350 times for possessing homemade alcohol. Flogging in the kingdom entails a series of strikes with a wooden cane, with blows distributed across the back and legs, normally not breaking the skin but leaving bruises.

This ruling comes after a year of bizarre and cruel punishments meted out by the Saudi judiciary, including the public flogging of liberal blogger Raif Badawi in January and a death sentence for Ali al-Nimr, a Saudi man accused of protest-related activities allegedly committed before he was 18 years old.

These incidents came to light even though Saudi Arabia bans independent human rights monitors. Saudi Arabia rarely grants United Nations experts or human rights organizations access, and because it has no law allowing non-governmental associations, domestic human rights groups are de facto forbidden. More than a dozen Saudi human rights advocates are languishing in prison today for “crimes” related to their “illegal” human rights work; most are convicted for “setting up an unlicensed organization.” These include activists such as Waleed Abu al-Khair, currently serving an outlandish 15-year sentence solely for his work exposing the government’s human rights abuses.

British Prime Minister David Cameron responded to the possible flogging of Mr. Andree by meekly asking Saudi officials not to carry out the punishment.

While Saudi Arabia receives some public scorn for discrimination against women, there is less public knowledge about its systematic intolerance of religious minorities. The country bans the public practice of any religion other than Islam: there are no Christian churches or Hindu temples to address the religious needs of millions of foreign workers.

Saudi Arabia doesn’t just abuse human rights at home. Since March, a Saudi-led coalition has carried out a bombing campaign against rebel forces in Yemen that has included indiscriminate attacks killing civilians (some of which may be war crimes), and used banned cluster munitions in civilian-populated areas. It has imposed a naval and air blockade on Yemen’s 23 million people that has contributed to alarming malnutrition levels, according to the United Nations humanitarian office.

And Saudi Arabia’s membership in the UN Human Rights Council has not led to improvements in its rights record. Instead, it has used its position to prevent an international inquiry into laws-of-war violations committed in Yemen. Somehow, bizarrely, Saudi Arabia serves as a partner in the U.S. government’s campaign to “combat violent extremism”—despite its longtime failure to address these issues at home in accordance with basic human rights and the rule of law.

Allies such as the United States and the United Kingdom rarely criticize Saudi abuses; one U.S. official even recently “welcomed” Saudi Arabia’s participation at the Human Rights Council. British Prime Minister David Cameron responded to the possible flogging of Mr. Andree by meekly asking Saudi officials not to carry out the punishment.

However, the unprecedented attention on Saudi Arabia’s abuses in 2015 may be altering these dynamics, creating incentives for U.S. and European politicians to support human rights in Saudi Arabia. The U.K. government’s decision to scrap a £5.9 million bid to provide a “training-needs analysis” to the Saudi prison system is one example, as it appears the opponents of the deal were motivated by human rights concerns. In March, Saudi Arabia blocked the Swedish foreign minister from addressing the Arab League and temporarily halted visas for Swedish businessmen after she criticized Mr. Badawi’s flogging as
“medieval.”

Saudi Arabia will employ all of its significant economic and diplomatic clout to intimidate and silence anyone who dares to challenge it on human rights grounds. According to The Intercept, the news site co-founded by Glenn Greenwald, Riyadh has recently hired several PR firms and lobbyists in Washington, including The Podesta Group, Edelman and DLA Piper to try to burnish its image.

But no PR campaign can whitewash the lashing of an elderly man, the public beheading of an alleged child offender, or the senseless bombing of Yemeni civilians. People are starting to take notice—and perhaps if the U.S. government raised its voice for human rights the Saudi government would rein in its abuses. 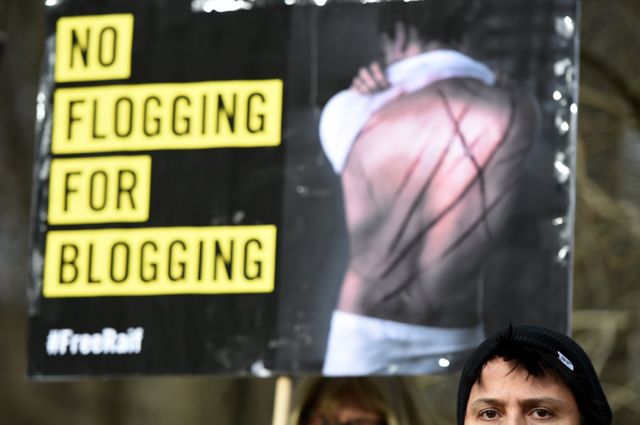