If you fancy yourself a sophisticated coffee drinker, like I do, but have never had the chance to take a class on the finer aspects of home brewing, it’s likely you’re making an inferior cup of joe.

At least, that’s the sad conclusion I came to last week. I was at Toby’s Estate, the coffee shop in Williamsburg—and several other locations throughout the city—that offers an assortment of tutorials on espresso prep, latte art and various caffeinated curricula. I’d come to hone my kitchen coffee-making skills. There are a number of brewing courses throughout the city, at Counter Culture and Joe Coffee, for instance, but Toby’s is known for its one-on-one lessons, and so it seemed like a more manageable route.

I like to consider myself a coffee snob, but when it comes to home brewing, I am, like Donny in The Big Lebowski, out of my element. I make a French press every weekend, and it’s a guessing game the whole way through. What I learned from Allie Caran, my 31-year-old instructor at Toby’s, is that I’m doing basically everything wrong.

I’ve been letting my steep with the coffee too long, boiling the too hot, and, apparently, using the wrong grinder—a blade grinder—which “is the worst possible grinder for coffee,” Ms. Caran bluntly put it. “It creates an uneven extraction, which causes bitterness and astringency in coffee.” (Burr grinders and conical burr grinders will create a more even grind.) Also, I haven’t been using a scale, which is, according to Ms. Caran, a big handicap. If you don’t know how much coffee you’re using, you’re going to make inconsistent cups. (Fortunately, my roommates have one for measuring the pot they smoke, so I’m covered.)

The V60 pourover—a cone-shaped ceramic or plastic coffee dripper—is Ms. Caran’s favorite home brewing method, so we focused on that for most of the course, when Ms. Caran wasn’t geeking out over origins and washes and mucilage (ask her). The V60, which Toby’s baristas use, involves a paper filter, which takes out excess oil, unlike a French press.

The V60 makes only one cup, so it’s quite manageable. Ms. Caran demonstrated how to go about it, grinding up 23 grams of El Tambor coffee from Guatemala, with cinnamon, berry and prune undertones, as it said on the bag. (If you want fresh coffee, Ms. Caran told me, make sure the roast date is listed on the bag; if it’s two weeks past the roast date, find a different one.)

Ms. Caran dumped the grind in the filter—which she’d wet beforehand to remove paper particulates—and poured hot from a kettle in a circular motion. (If the coffee is good, the oils will “bloom” up and create a reddish-brown froth.) She did this a few times, until she’d made a 12-ounce cup, which takes about three minutes to prepare.

Ms. Caran poured out some for me to taste, after it had cooled a bit (smoking-hot coffee will hide its flavors). It was quite a nuanced cup; and while I didn’t taste any prunes or whatever, when Ms. Caran suggested caramel, I felt she was spot on. “Power of suggestion is huge,” Ms. Caran said.

Can’t I just drink my shitty cup of Folgers and read my newspaper in peace? you might be asking. And the answer is: of course you can. But preparing a cup this way is a satisfying ritual.

Finally, it was my turn. I measured out the beans, ground them up and dropped them into the filter. I boiled the , carefully applied it to the coffee—bloom!—and then, just like that, it was time to drink. Perhaps due to my inexperienced palate, I detected no difference between my coffee and Ms. Caran’s. She did, though, and suggested that hers was “juicy.” Mine, she said, was “pithier.” I’ll take it.

“The only difference was the person,” Ms. Caran said. “The change of person makes the change of coffee.”

Now that I’m a changed man, I look forward to presenting myself as a snob in the kitchen, too. 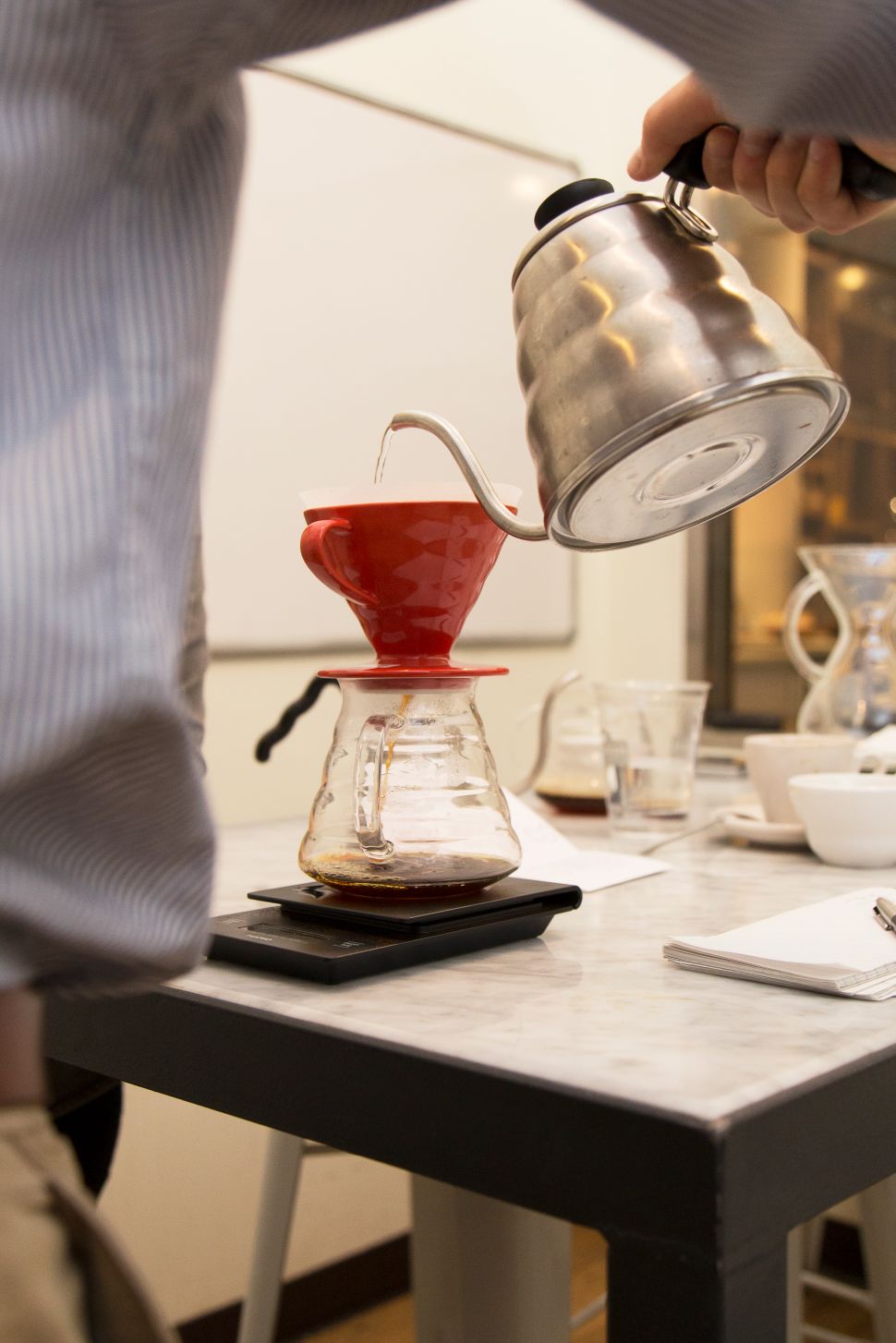