Jeopardy! isn’t normally the type of show that trends on social media—that is, unless one of its former contestants does something stupid.

But this week the show was the talk of Twitter, thanks to a contestant named Laura Ashby from Marietta, Georgia. By Tuesday night, her two-day cash winnings totaled $36,802.

Twitter users, however, were less concerned about the answers Ms. Ashby gave than the way she gave them. You see, Ms. Ashby uptalks, which means that she inflects up at the ends of her sentences so that they sound like questions. Here’s what that sounds like in action:

Unsurprisingly, the Internet was riveted. The hashtags #Jeopardy and #JeopardyLaura were trending throughout the Monday and Tuesday broadcasts:

The moment when you remember Laura is back tonight… #JeopardyLaura #jeopardy pic.twitter.com/GQJEuNiHTe

#JeopardyLaura was annoying me as I watched. So I checked twitter. And she's trending. Thanks Internet. I knew I could count on you.

I can only imagine the courtroom stenographer for #JeopardyLaura – …Objeccccctttttiiiiiooooooonnnnnn!

My husband works in the same building as #JeopardyLaura. My life's goal is an elevator conversation with her.

Sadly, Ms. Ashby lost last night, coming in third in the Tournament of Champions, and so was only able to pocket $1,000. Twitter, however, was relieved:

Pretty bummed Laura lost. I was looking for-waaaaaard to another night of this. #JeopardyLaura #Jeopardy

Laura’s #Jeopardy run may be done, but her husband still has to live with hearing her talk. Say a prayer for himmmmmm.

For her part, Ms. Ashby took the jokes in stride, teasing the haters with some good-natured ribbing:

Henry VIII had his haters, too. They didn't get ahead. #Jeopardy #JeopardyLaura

All right Internet, you can go back to teasing cats with cucumbers now #JeopardyLaura

Ah, Twitter—where viewers can insult TV personalities, and those same personalities can give it right back to them. 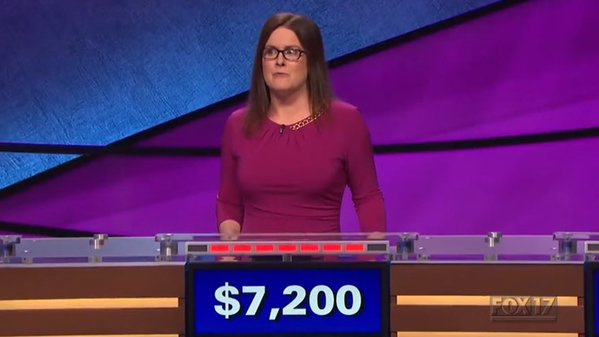