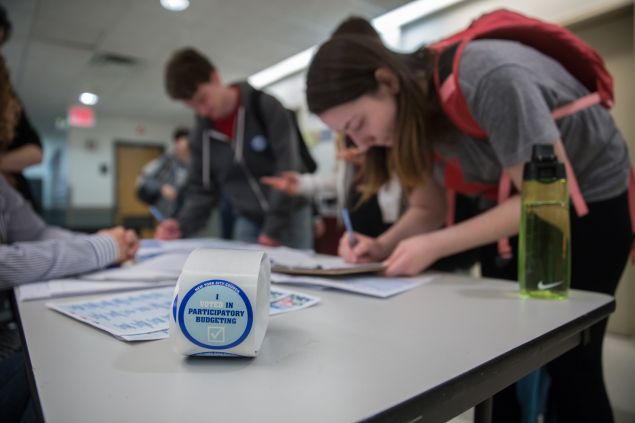 Rory Lancman knows that when a story runs about participatory budgeting in the City Council, people like him are usually not portrayed in a flattering light.

Mr. Lancman, a Queens city councilman, is a progressive on many economic and social issues, but he breaks with a dominant liberal faction in the 51-member body on what some see as a true litmus test of what it means to be a progressive, transparent council member in New York City: he chooses not to allow residents in his district to vote on how to spend a chunk of public funds he’s allotted every year.

“The only benefit I can see in my district is a cynical one,” Mr. Lancman said. “It would be a great way to use governmental resources to mount what is for all intents and purposes a political campaign outside the normal political process.”

But why not let actual people, not politicians, call the shots? Enter participatory budgeting, which began with just four council members, including the current speaker, Melissa Mark-Viverito, a few years ago and now has 27 of the 51 members taking part. This amounts to a little more than $30 million in total pledged to the program, an impressive figure though a mere crumb of the city’s $75 billion budget.

Participatory budgeting, known by its shorthand PB in City Hall, allows residents as young as 14, regardless of citizenship, to vote on how their council member spends at least $1 million of the $5 million in capital funding they can allocate for projects in their districts.

The arguments for participatory budgeting are inviting and make plenty of sense, especially as more and more people choose to tune out of the political process altogether. Immigrants, English and non-English-speaking alike, and teenagers can feel like they have more of a stake in their neighborhoods. Ms. Mark-Viverito, in a recent speech extolling the process, pointed to an Urban Justice Center study that showed 60 percent of participants identified as nonwhite, 30 percent reported annual household income of $25,000 or less and nearly 25 percent were born outside the country.

In many ways, participatory budgeting represents democracy in its platonic ideal. Dick Dadey, the executive director of the good government group Citizens Union, said it brings much-needed transparency to a budgeting process that can seem opaque and byzantine.

Ms. Mark-Viverito, in an interview with the Observer, said she imagined city agencies one day allowing New Yorkers to vote on how their budgets gets spent.

“I would like to see different city agencies incorporate some aspect of participatory budgeting in allocating funds. I’d love to see the [de Blasio] administration embrace this,” she said. “This is a long-term goal.”

The extent to which Ms. Mark-Viverito, a proud progressive, has trumpeted participatory budgeting is immediately clear. There’s a tab for it on the top of the City Council’s website. Go there and you’ll see all the types of projects people have voted for: security cameras for public schools in the Bronx, road resurfacing in Queens, a bus stop upgrade in Brooklyn, an outdoor fitness center in Manhattan.

Voting is held over multiple days and takes place beyond the traditional booth. Residents can fill out ballots in the offices of their council members, at schools, libraries and inside housing developments, for example. The fewest number of ballots cast this spring in one district was 822 and the most was 6,299, according to Council tallies. The most in capital funding a council member allowed a district to vote on was about $2.5 million.

There are enough skeptics-turned-converts to make holdouts like Mr. Lancman seem curmudgeonly at best and anti-democratic at worst. “I too was skeptical about what this was and what it would entail. It was a lot of work but it was as good as any constituent service I ever did,” said Mark Weprin, a former Queens councilman who stepped down this year to take a post in the Cuomo administration.

“We met people we never met before. We met people who never came to our office, never wrote to us, and are now involved in PB,” he said. “Now they knew us.”

Yet there’s a quiet minority who doesn’t feel the same way. Several council members now involved in participatory budgeting are rethinking their commitments, sources say. Public and peer pressure may ultimately keep a majority of the Council in the fold, but an expansion of the program will have to overcome a laundry list of misgivings, including the significant workload, the fear that certain interest groups will dominate the process at the expense of a less vocal and more vulnerable minority, and the idea that it dilutes what little power a council member has in a system dominated by the executive branch.

Even proponents of participatory budgeting, like Councilman Corey Johnson, a Manhattan Democrat, emphasize how much effort a council member’s limited staff must put in to pull off a successful round of voting.

“It’s a lot of work. That should be one of the overriding messages. It’s a tremendous amount of work but I actually think that people really like it and enjoy it,” Mr. Johnson said. “Once you offer something and you do it, it’s very hard to take it away. Than people will be like, ‘Why is it not happening anymore?’ Once you say ‘yes’ you’re kind of boxed in, committed.”

The staff budgets of council members vary, but most lawmakers typically have only a handful of full-time staffers committed to doing the meat and potatoes of an elected official’s job: constituent services. Participatory budgeting requires far more out of a council member’s staff than resolving complaints about fallen trees or a much-needed stop sign.

Voting takes place every spring, but preparations begin long before. Last month, council members staged “neighborhood assemblies” in their districts for members of the community to learn more about participatory budgeting and brainstorm project ideas. Volunteer “budget delegates” were selected and given an orientation about the budgeting process.

Then delegates, with the help of staff from the Council’s central office, will meet to take ideas and turn them into full, workable proposals. At project expos, set for next February and March, delegates present draft project proposals to the community and receive feedback. Residents vote shortly after, and then council members submit the winning projects for inclusion in the city budget.

In essence, participatory budgeting is a half year investment, if done well. There are other complications, including figuring out what proposed projects are actually feasible and legal. This means, for a council member already performing the traditional duties of helping constituents and legislating, also wrangling with the Office of Management and Budget to determine how many of these great things their constituents want can really happen.

“We have to go to individuals inside city agencies, inside OMB, in an ad hoc way,” Mr. Johnson said. “It would be nice if there was a unit in OMB that dealt specifically with PB-related matters.”

Councilman Rafael Espinal, a Brooklyn Democrat who does not do participatory budgeting, said the sheer workload would be too much for the three full-time staffers he employs. “I represent a community that has a lot of needs. Currently, my staff is swamped with constituent work on a day-to-day basis. They’re putting in 10 hours a day to keep up with the amount of work. If the program included staff, it would be something I would consider.”

A spokeswoman for Ms. Mark-Viverito pointed to the ways the City Council assists lawmakers, and suggested that a staffer in each office should, ideally, be dedicated full-time to participatory budgeting. She said the Council helps plan and hold presentations for budget delegates, recruit and deploy volunteers citywide for the vote, print promotional materials, ballots, and fliers, along with tabulating votes and connecting staffers with relevant city agencies.

A running theme in the complaints about the process is how much of a priority it is for Ms. Mark-Viverito, and the way non-participants are seen as defying supposed tenets of good government. Mr. Espinal, who does not belong to the liberal 19-member Progressive Caucus, said the quiet criticism is frustrating.

“They don’t understand the needs in different districts,” he said, noting he represents impoverished slices of Bushwick and East New York. “We all want to be as transparent as possible.”

While there’s a wide range of income levels in the districts that do get to vote on how their council members spend capital funds, critics of the program see it as a pastime of the affluent, a supposed way to empower the poor that just ends up rewarding the same subset of dedicated, middle and upper middle class residents blessed with the leisure time to take participatory budgeting seriously.

Those that do have that kind of time will just outvote marginalized interest groups, critics say.

“If you can get together a group of people to push for some project, there can be discrimination against other organizations that don’t have the lobbying skills and organizational effectiveness,” said Councilman Alan Maisel, a Brooklyn Democrat who also does not do participatory budgeting. “I see this particularly in the schools. One school may have a very effective parent organization. Another school, just as meritorious, may not.”

Council members in districts with stark economic and racial divisions may have reasons to steer clear. A district in Lower Manhattan, roping in the city’s wealthiest residents along with low-income Asian immigrants, could set up a racially-charged dynamic of Battery Park City outvoting Chinatown, for example. Councilwoman Margaret Chin, the area’s representative, does not do participatory budgeting. (She declined to comment for this story.)

Mr. Lancman said it doesn’t make sense for his eastern Queens district. He derided participatory budgeting as redundant, since the capital funding would be spent on similar priorities anyway, and argued the dash of democracy wasn’t worth the amount of time and effort required.

“It runs about six to eight months throughout the year. Now given the fact we’re likely to see the same people voting who already participate in what, in my district, is a vibrant and active civic culture, and the outcomes from participatory budgeting are the same outcomes that we get in the regular budgeting process, I don’t see where the benefit is,” he said.

Ms. Mark-Viverito, however, believes the program will keep adding lawmakers. 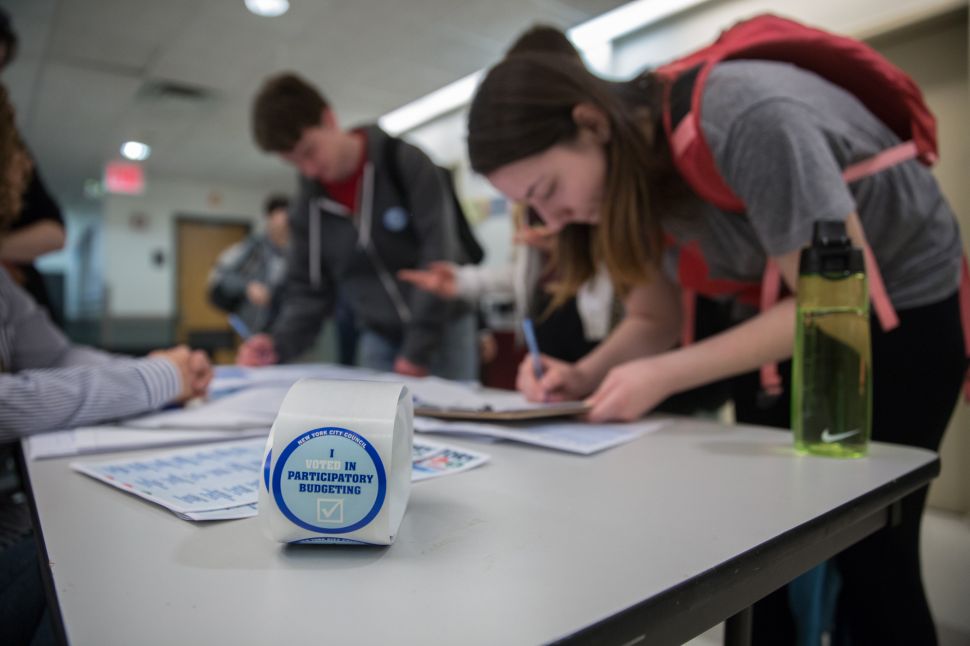