So Twyla Tharp has been celebrating her 50th anniversary as a choreographer with a nationwide tour of two major new works. Are you surprised? Did you really think she would ever stop, pause, or rest? If you did, you just don’t understand her drive—her need—to make dances, inspire dancers, and reinvent herself. If there’s something she hasn’t already tried and mastered, she’ll try it and master it soon enough. Her hunger to do it all has carried her triumphantly through modern dance, ballet, movies, Broadway musicals, television specials, figure-skating routines—which leaves her synchronized swimming to look forward to. And, following in Balanchine’s footsteps, choreographing for elephants.

Just recently, the anniversary-tour program played its final performance—to a standing ovation—here in New York at the Koch. Each half began with a stirring Fanfare by John Zorn, a nifty way of introducing the dancers. Then came Preludes and Fugues, to 22 excerpts from Bach’s “The Well-Tempered Clavier,” a definitive statement of Tharp’s lifelong reverence for the great composer (she would probably say “the greatest composer”).

One of her hallmarks is the ability to have so much going on in rapid succession or simultaneously without ever allowing a moment of confusion or muddle. Everything seems spontaneous, yet the architecture of this extended piece is so firm, so clear, that you never doubt the rightness of any passage—and there are so many passages! In duets and trios, in solo flashes and complex groupings and regroupings, Tharp’s ideas tumble out with a fecundity that can only be called staggering—just as Bach’s ideas do. Not that there’s any tinge of the Baroque in her vocabulary; these are contemporary steps that we recognize from the body of her work. Yet presented against the glory of Bach’s music—though not presuming to match Bach’s profundity—they take on a grander resonance.

We’ve come to depend on Tharp’s unfailing sense of structure. Equally impressive, here and always, is her genius for revealing the largest possibilities her dancers contain within themselves. It’s uncanny. Take, for instance, what she has brought forth out of Savannah Lowery, that large-scale, lush soloist from New York City Ballet who is so obviously talented but has yet to find her definitive place in the company’s repertory. Here she’s a dominating lyrical presence—a glory; Tharp has allowed Lowery to find herself. Daniel Baker, whose joyous explosiveness some of us have admired since his Miami City Ballet days, is at his most uninhibited and rousing for Tharp. Again, he’s been identified and understood—and thereby freed to be more of himself. And since most members of the company have worked for and with Tharp for years, and under many circumstances, they trust her—and she trusts them. Balanchine, too, had this genius for revealing his dancers to themselves, and so to us.

Preludes and Fugues is an unqualified success. The second half of the program, Yowzie, is a vaudeville set to the early jazz of Jelly Roll Morton and others. Here the outrageously colorful—excessively colorful?—costumes by Santo Loquasto tell us at once that we’re in for a series of jolts and bangs, for exaggeration of effect. People are drunk, people are gender-confused, people are bewildered—they grapple with each other, they bump into each other, they swan around when they’re not prostrate with exhaustion or electric with frenzy. Yowzie is a comedy (most of the time), and for me some of the comedy is too slapstick—but then Tharp has always cherished slapstick.

This work is centered on two of her long-standing collaborators: Rika Okamoto and Matthew Dibble. Okamoto is a wonderful dancer, though here, with her crazed headpiece and goofy smile, not quite so funny as she and Tharp seem to feel she is: there’s just too much of her hijinks. But Dibble, her partner, is fabulous—the most impressive dancer on stage. He, more even than Okamoto, seems to me an incarnation of what Tharp herself was as a dancer: witty, unpredictable, full-gale energized, completely appealing. He comes from England, Okamoto comes from Japan, but they meet happily and confidently in Tharpland; in fact, confidence is an essential part of what Tharp gives her dancers. No surprise: who has ever been more confident than she herself?

The entire company, on this last day of their grueling 10-week tour, looked inspired, relaxed, fulfilled. It can’t have been easy, but it must have been fun.

The idea for a recent program at the City Center was brilliant: to present four dance works, by four different choreographers, to the music of the immensely gifted Thomas Adès. It was a brilliant idea because Adès’ work is so powerful and so stimulating. Alas, the work of the four choreographers didn’t live up to it.

To the composer’s superb Violin Concerto (“Concentric Paths”), Wayne McGregor created Outlier for New York City Ballet a few years ago. It’s a typical McGregor piece—capably put together, with surface excitements, but little depth. It’s true that it’s less aggressive than most of his work and so more sympathetic, but it in no way does justice to the music, which was well played by the Orchestra of St. Lukes with a superb soloist, Thomas Gould.

Karole Armitage, who’s been around forever, Lord knows why, contributed a slight work for piano (played by the composer), and soprano Anna Dennis, whose fancy enunciation and piercing voice didn’t help matters. The text, to Tennessee Williams’ poem “Life Story” didn’t help either. And the dancers, Ruka Hatua-Saar and Emily Wagner, managed to be both underpowered and cute even when dancing to talk of being burned to death in a hotel bedroom. When will Armitage eliminate her fake Balanchinisms (in this case I’m afraid she’s channeling Agon)? This irritating work was surely more satisfactory when performed at City Ballet in 1999 by Wendy Whelan and Albert Evans.

The Grit in the Oyster is an utterly bland and inconsequential piece for three dancers by Alexander Whitley to Adès’s powerful string quintet (the composer again at the piano). Since what was happening on stage was so irrelevant, you could follow Balanchine’s advice for such situations: close your eyes and listen.

The main event was Crystal Pite’s Polaris, to an intense orchestral work of the same name, the composer conducting. Pite is an interesting choreographer from Canada, with connections to William Forsythe and the Nederlands Dans Theatre. Her work is ambitious and individual, and Polaris is ambitious and individual—as you would expect from a work that has 66 dancers on stage. The curtains go up on darkness, and then you realize that there’s a swarm or clump of bodies heaving and crawling on the floor. Are they people? Bugs? (They’re all in black, and sometimes they wiggle little feelers from their hands.) Eventually they’re all taking part in a giant surging wave—like in a football stadium. This happens a lot.

Again and again (and again), groups of ten or so run fiercely across the stage, beautifully timed so that the sixty supernumeraries from the NYU Tisch School of the Arts dance department never crash into each other—it’s synchronized dancing to the max, and just as tiresome after a while as synchronized anything can be. At least it’s effective—and indeed Polaris is more effect than dance. But it’s adventurous, even brave, in its aspirations, and whether it’s about bugs or war or hell doesn’t make much difference. And the six professional dancers from Pite’s own company, Kidd Pivot, are exemplary when they’re safe from the wavers and runners. Pite is someone to keep track of. 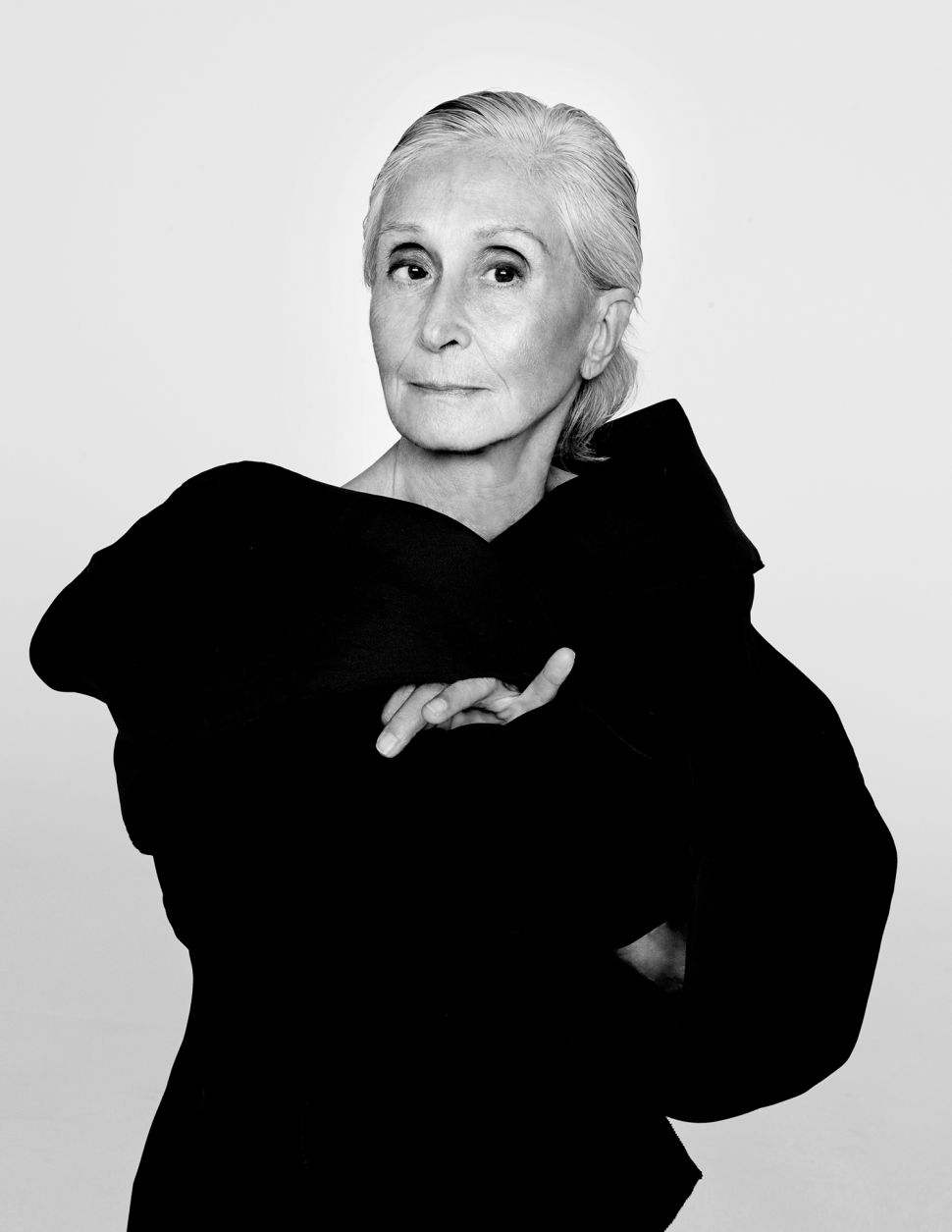