(Each day this week, tvDownload will take a look at one of the six potential series rolled out during Amazon’s 2015 pilot season. Today: Z.)

“I want to go someplace shiny and new, that’s not obsessed with the past,” exclaims Zelda Sayre (Christina Ricci) in Amazon’s new pilot Z. Considering this is Amazon’s first dabble into a period piece, the line could be read as ironic–after all, the last time we saw a reasonable facsimile of Zelda on-screen it was Alison Pill in Midnight in Paris, a movie whose protagonist eschewed the shiny and new and was himself obsession with the past–but delivered with the wild-eyed zeal of Ms. Ricci’s character, it’s more of a declaration of destiny.

The problem with Amazon’s pilot season, as far as I can tell (now that we’re in the third season of them), is that it’s hard not to view them as self-contained little features: like last season’s Whit Stillman offering, The Cosmopolitans, Z could as easily remain what it is– a brief glimpse of a moment in time–rather than the beginning of something longer and episodic. Based on Therese Anne Fowler’s novel, Z: The Beginning of Everything, the pilot could remain just that: a beginning. I don’t think it will be a popular opinion, but I’m fine leaving the show right there.

Not that the subject matter isn’t ripe: Zelda has always been a role-model for many young women who glamorize her zeal, her proto-feminist disregard for gender and social norms, her spunk, and her (sexy!) emotional problems. Though he may have been the more famous of the couple, the story we’ve been told is of The Great Gatsby author as a slave in love for his wife: utterly devoted, utterly entranced. It’s a good pitch for these shiny and new times; a modern day (ish) subversive fairy tale. Zelda wasn’t the woman behind the great man so much as the one we see in Z’s opening scene: plunging ahead, consequences be damned. (The shot of Zelda stripping down to her birthday suit to jump into the foreshadows later plunges Zelda would take in her life: fully-clothed, into the fountain in Union Square; down a flight of stairs because Fitzgerald flirted with Isadora Duncan; attempting to veer their car off a cliff after turning down a solo in the Italian Aida.)

Ricci, who started as the monotoned Wednesday Addams in The Addams Family, has brought this kind of sparkly, fever-eyed zeal to a role before, playing Elizabeth Wurtzel in the film adaptation of Prozac Nation. Here, she’s the original manic pixie dream girl, stuck in the old dominion during the beginning of World War I, slipping soldier boys some tongue for good luck as they prepare to fight in France. David Strathairn, who did a great job as William Henry Seward in Lincoln and Edward R Murrow in Good Night and Good Luck, is oddly cast here as Zelda’s Southern judge of a father: he’s supposed to be unreasonable and formidable, patriarchy manifest, but comes across as stiff, ineffectual and slightly absurd, with a certain British fussiness, as if he was auditioning for the role of Mr. Darling or Mr. Banks in a Disney film. We see that despite his ironclad rules about dinner time (which Zelda disregards, showing up sopping wet and shoeless) and general carousing (which Zelda blatantly disregards, coming home at 1:30 am after giving a kiss-off to a would-be suitor who begs her to wait for him…which…nope), despite his thundering cries of “Hussy!”, he’s a man who is stymied at every turn: even his subservient wife helps Zelda escape through a window to attend a party. And later, when Zelda eschews going out–almost missing a literal dance with destiny–the Judge has a seemingly baseless change of heart, saying that his daughter is “old enough to be making decisions for herself.” The way it’s played, it’s hard to understand the subtext: is he writing her off, or finally accepting her autonomy? And if it’s the latter, what, exactly is Zelda so eager to run away from, if not the tyranny of the Southern patriarchy?

It’s Zelda’s story all right, but the problem with the way Z is going about portraying her life, she’s more spoiled princess than jazz-era legend. Sure, she’s good at doing the two-step, but her legions of suitors–and the angry glares from her side-eyed rivals–doesn’t make her current setup seem that bad. In fact, she seems perfectly in control of her own destiny up until the moment where she locks eyes with the only blond in the room (which, come on…why does “Yankee” have to be synonymous with “Semitic” ), and her future husband. As F. Scott Fitzgerald, Gavin Stenhouse doesn’t bring much to the role besides a certain snobbery: he’s a soldier, yes, but he’s also a reader, who doesn’t fall for these simple country girls who, when asked, pronounce the Bible as their favorite book.

Nor does he seem as proactive as Zelda, though that may well be the point: after watching her perform a ballet recital at the town hall (or whatever) during the boys’ final sendoff, he’s immediately entranced, but fails to make any overtures toward the object of his admiration. Zelda meanwhile tracks F. Scott’s movements as she’s twirled from beau to beau, basically pleading with her eyes that the young man step in and whisk her away from all this…normalcy. We’ve seen Zelda turn down dance partners before, but here she’s rendered helpless as two soldiers begin to scrap over who gets the next waltz, and we’re supposed to believe that Zelda is actually in danger of being manhandled by the time F Scott rouses the courage to step in front and declare himself her date for the evening. It’s another off-key note in the otherwise melodious pilot: even allowing that this is part of the couple’s origin story, director Tim Blake Nelson does a disservice to the spirit of Zelda by turning the Fitzgeralds’ first meet-cute into a damsel in distress scenario.

The story of Zelda Fitzgerald, after all, is not one of a woman saved: not by the gallantry of true love, the sparkle of a new world on the horizon, nor anything else. 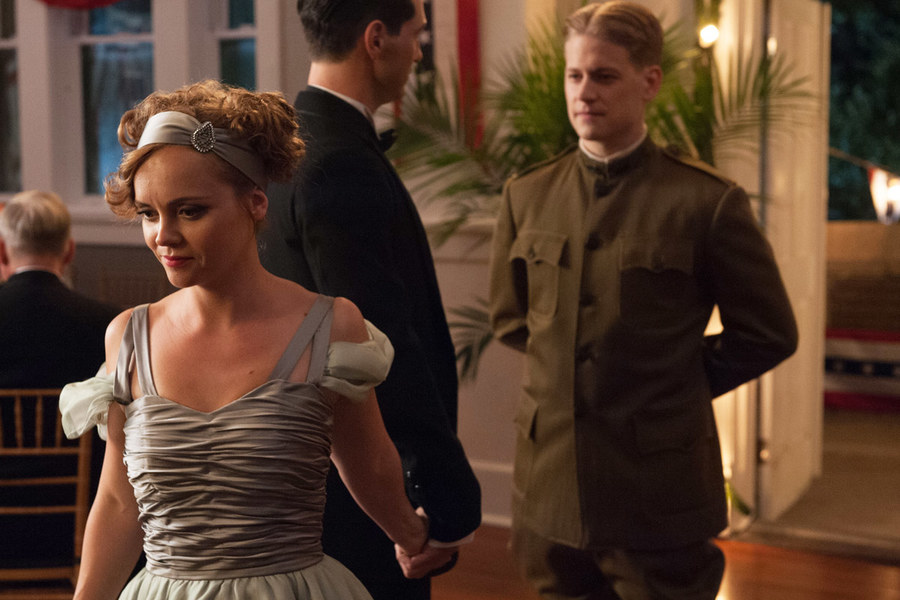