Finally: an American Horror Story episode worthy of what the first season of this show promised us! It was almost too much: you mean we’re going to get an episode where the tables turn on the Countess, heavily features James Patrick March in all his campy, deranged sexiness–which, as someone who watched The Lazarus Effect on Tuesday just to see Evan Peters choke on a vape pen, was the ultimate payoff– AND John Lowe B-story that almost made sense? Has God (read: Ryan Murphy) been listening to me this entire time? Will this episode be the one that turns the Hotel Cortez season from Freak Show-level inanity to Coven-level cohesion? Let’s find out!

First of all, let’s address the big, fat, accent-challenged elephant in the room: Finn Wittrock is back, despite Tristan’s death last week. Boo. This show wasn’t suffering from a lack of Wittrock that it needed to give him another role as Rudolph Valentino, the Countess’ true love. I’ll allow that this makes the Countess’ interest in Tristan seem a little less random than it originally appeared (remember when he CUT HIS FACE to quit modeling? No RIP for you, Tristan), but considering that this show’s whole thing is having a bunch of dudes who all vaguely resemble each other, why couldn’t Murphy just find another actor who sort of looked like Finn Wittrock? Maybe one who wouldn’t keep confusing an Italian accent for a Transylvanian one?

But besides my general disdain for Wittrock-as-AHS characters (I’ve got nothing against him in other roles; I watched Unbroken right after The Lazarus Effect, just to make sure I wasn’t being too biased), “Flicker” is the rare gem of an AHS episode that could easily work as a stand-alone narrative. We start with Will Drake’s construction team knocking down one of those pesky “not in the floorplan” steel walls of the Cortez, which apparently housed like, a whole hallway’s worth of extra rooms, and two very hungry, very old vampires. Not to quibble, but how could there be an entire wing of this hotel that no one noticed? At first it seemed silly and slightly Poe-ish, but by the time we’ve caught up to who the vampires were and how they ended up trapped for three quarters of a century in a bricked-up hotel floor, it’s provokes a hyperventilating sense of the claustrophobic: not unlike the eternal loop of Misty Day’s hell in Coven, the idea of being immortal and trapped in a bricked-up wing that technically doesn’t exist is supremely terrifying to imagine. It also reminded me of a story in Amelia Gray’s deliciously creepy Gutshot, about two vampiric-like creatures who live in the bowels of an old factory and trap a woman in the overhead vents. It also reminded me of the fantastic novel Flicker by Theodore Roszak, about turning people into gods on celluloid, and Marisha Pessl’s Night Film, about a detective who discovers a cult living on an old movie set. Along with the aforementioned Poe-ish plot points that March brings to the story, there were a lot of fun literary analogies to play with this week. (See? Me smart. Me no just watch TV all the time for job. Finn Wittrock SUX!!!11 LOL wut even? How do?)

The vampires turn out to be Valentino and his wife, Natacha Rambova, two silent era movie stars who considered themselves silver screen gods. No, literally, that’s how Rambova describes their identity to a younger Countess, who back in the day was just a starstruck extra in the background of Valentino’s The Sheik. “Why am I here?” the Countess asks after a late night tango session with Valentino leads to an awkward confrontation with Rambova.

Pretty fascinating stuff, and we haven’t even gotten to the supernatural shit yet. History, of course, gets in the way: Valentino died (after a bout of gut sickness, which sounds like its own form of hell) and the Countess courted death at the Cortez by attempting to jump out a window. She’s saved, ironically by the young hotelier Mr. March, who refuses to let her go, both figuratively and literally. We kind of gloss over how the Countess reacted as she discovered the true nature of her new, rich husband: she didn’t love him, but was into the kinky sex games, and one day discovers him dismantling a body at which point she…asks him to let her watch next time? Jeez, that was a pretty quick hard left. One day you’re nothing but a chorus girl having a fling with one of the most famous ambiguously gay screen icons of all time, the next you’ve cozied up to the West Coast Gatsby equivalent of Ted Bundy. It’s really a testament to how compelling Lady Gaga’s performance is that, while watching her, these bigger character questions recede to the back of one’s mind. Look at how she transforms in the beginning of this episode, from haughty immortal to scared little girl, when Iris and she discover the secret hallway. The Countess may not age because of her virus, but that doesn’t mean she’s immortal. She’s not, as we discovered this week, quite yet a god. Just a harem extra who has become very good at stepping into the leading lady’s spotlight.

Actually, it’s kind of brilliant how the vampires operate on this show: they don’t age, but beyond that, they have almost zero abilities. Maybe like, super smell and some extra strength, but that’s it. They can’t transform into animals, they can’t disappear, they can’t fly, they can’t even get themselves out of a hotel wing…not even with all the time in the world. In this way, the vampires of hotel much more resemble their silver screen patriarch, Nosferatu, than any of the creatures on True Blood or Buffy or even Dracula. Which makes sense, as the originator of the current vampire gene was Nosferatu’s director,  F.W. Murnau, who we see offer Valentino the eternal life trade in one of those classic Murphyian parlor tricks: in the Countess’ flashback, we see her as the Woman in Black, haunting Valentino’s grave but still very much human, only to discover Valentino and Rambova still very much alive, which leads to Valentino telling her about how he ended up faking his death, which leads to this Nosferatu homage of Valentino’s story about meeting Murnau on a train. A little Heart of Darkness, what with all the nesting dolls of narrators, but it’s being used to better effect this season than in others, and as it leads to Valentino and Rambova turning the Countess and promising to whisk her away, it’s function was both illuminating and plot-propelling. Now, is that too much to ask for the rest of the show?

Equally illuminating was March’s relationship to the vampires (and by extension, all current day activities at the Cortez): after spying on his wife at Valentino’s grave (because what else does a serial killer/entrepreneur do with his spare time except stalk his own wife?), he interrupts Valentino and Rambova the night before they are destined to speed away with his prize and entombs them in the walls of his hotel. Which is…kind of a risky gambit. I mean, does HE know that they are vampires? And if he does, why did he think walls could hold them in? I mean, d’uh, they did, but what was the endgame there? Especially since March died without ever telling the Countess what happened to her loves, and only during his monthly dinner date with his alive wife does the ghost of March (wait, the what? No time! Keep up!) reveal the most recent resting place of The Great Lover. Oh yeah, March and the Countess still have formal dinners once a month, even though he’s dead and she doesn’t even really like him. The whole situation is so awkward, I’m more surprised the Countess didn’t just up and liquidate the Cortez the minute March was in the ground. Like the Murder House in the inaugural season, haunting the Cortez seems like a kind of No Exit scenario of social faux-pas: at one point, March pleads that the Countess kill Will Drake at another location, since it would be “damned awkward” running into his wife’s new husband’s ghost all the time. Amazing. This plot gets an A+. It would be awkward to haunt the same place as your ex’s ex! Why is this not addressed in more horror shit?

The answer is that any attempt to humanize monsters and ghosts makes them, by their very nature, less scary. The vampires, having been revealed as nothing more than regular people with a virility virus, have already lost much of their terror hold on us. The ghosts are just former people themselves. Which leads us to the show’s one remaining human-human (besides Drake, I guess): the bonkers former Detective John Lowe. He’s in a mental hospital now, after his quest to catch the 10 Commandments Killer coincided with his mental breakdown from staying at the Cortez. Though we understand why he fired his gun in front of Scarlet last week, and maybe even by the his upcoming divorce is stressing him out, it’s pretty clear Lowe punched his partner in the jaw to get himself booked into the looney bin, where he immediatly discovers a “witness” from the killings: a young girl named Red. Red is not just Lowe’s weird Tyler Durden projection of his daughter Scarlett, either: she’s one of the immortal children of the Countess who participated in the 10 Commandment killings, hinting that she was compelled to participate by an older man. March would be the best guess: using the Countess’ little Children of the Damned for his own dirty deeds makes a bitter pill of sense: its yet another way to get back at his ex-wife for never loving him the way he loved her. Red demands that Lowe help her break out of the asylum before she shows him where the killer is, which is done off-screen and with apparently zero problems (couldn’t really bear too much Lowe this episode, anyway). Then she tells Lowe that they need to “go home,” aka The Cortez, before stepping in front of a mac truck and ending her very much not immortal life. Vampire suicide is so much easier when you can just off yourself by regular means and not have to wait for a stake in the heart.

Valentino and Rambova, now semi-restored after feasting on a room full of Aussies and the real estate agent who managed Drake’s Cortez takeover (who herself was a holdover from season one), get their own version of a happy ending: walking hand in hand out of the Cortez, into the sun. I’m hoping this is the last we’ll see of the old gods, because as a self-contained story arc, “Flicker” was about as clean as you can get. 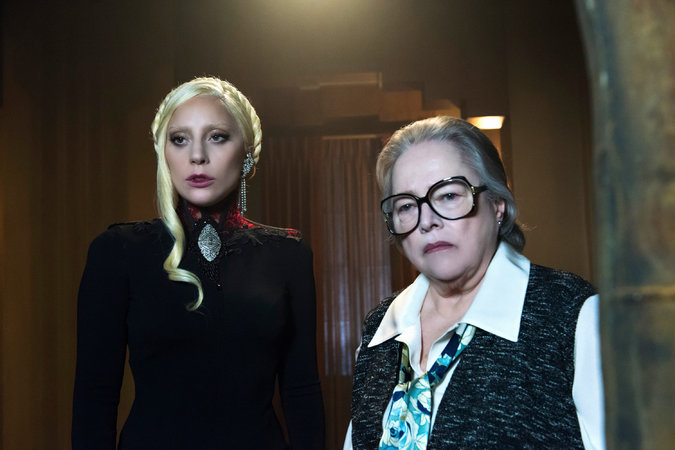