Henry Siegman was once a prominent Jewish leader, but in the decades since he last held any serious position in the community, he has made his mark as yet another Jew who has learned the way to stay in the press is to attack fellow Jews and the State of Israel. It was, therefore, not surprising that he decided to criticize me in a publication that has also made a habit of disingenuous and counterfactual attacks on Israel and its supporters—the radical anti-Israel left-wing rag The Nation. I’m a big boy and can take shots from the likes of Mr. Siegman; however, when a fellow Jew likens me to the Nazi propagandist Joseph Goebbels he has gone beyond the bounds of reasonable criticism and has become an unhinged nut.

What set off Mr. Siegman was the ad we published in The New York Times pointing out how Secretary of State John Kerry’s consistent effort to morally equate Palestinian murderers with Israeli victims and the security forces who defend them. The ad expressly did not call Kerry an anti-Semite. Rather, we made the case that his words are endangering Jews around the world by refusing to unconditionally condemn the murder of Jews and because murderers do not fear any consequences from the United States.

Like many Jews who want to convince non-Jews that they have a legitimate opinion, Mr. Siegman brings up his own escape from the Nazis in an effort to suggest that this qualifies him to speak for the Jews. Alas, he is not the first Holocaust survivor to turn against his own people.

Mr. Siegman was clearly playing to the readers of The Nation by trying to prove my guilt by association with my friend, Sheldon Adelson, the world’s foremost Jewish philanthropist and the current bête noire of the left-wing. He does the same to Israeli Prime Minister Benjamin Netanyahu by drawing a connection between his policies today and those conducted in the 1940s by the Irgun—the Jewish underground that is another popular target of the left. And, of course, the association with a prominent Nazi is the ultimate slander against a fellow Jew.

It is ironic that Mr. Siegman brought up Mr. Goebbels in his disgusting attempt to defend Palestinian terror. After all, Mr. Goebbels made famous the concept of the “Big Lie,” that is, repeating an outrageous untruth in the hope that the uninformed and ignorant will believe it. This has actually been the modus operandi of the Palestinians for years. Here are just a few examples of the whoppers told by Palestinian officials: the Palestinian representative to the UN Human Rights Commission claimed the Israeli government had injected 300 Palestinian children with the HIV virus; Palestinians claimed that Israel dropped poisoned candies from helicopters in front of schools to poison children; a modified version of this lie was the accusation that Israel was making “bombs and mines designed as toys” and dropping them into the Palestinian territories from airplanes so children will play with them and be blown up.

The Palestinians have their own Big-lie propaganda chief in Saeb Erekat, who, paradoxically, is the lead “peace negotiator” for the Palestinians. “There’s a saying,” Mr. Erekat has said, “that if you don’t stop a man who is lying after 24 hours, the lies turn into facts.” Here are a few examples of how Mr. Erekat has put this idea into practice:

In 2002 Mr. Erekat told CNN that at least 500 people were massacred and 1,600 people, including women and children, were missing in Jenin after Israeli forces launched an operation to wipe out the terror network in the city. Mr. Erekat produced no evidence and the Palestinians’ own review committee later reported a death toll of 56, of whom 34 were combatants. No women or children were reported missing.

In 2007, just as peace talks were going to begin in Annapolis, Mr. Erekat delegitimized Israel’s position by making the remarkable statement that “no state in the world connects its national identity to a religious identity.” A strange assertion given that the draft constitution for “Palestine” declares Islam the state religion of Palestine. Islam is also the state religion of more than 20 countries. I’m currently writing from the UK where the Queen is both head of State and defender of the Faith. The official religion is the Church of England.

In February 2014, Mr. Erekat claimed his family was related to the Canaanites to prove the Palestinians predated the Jews in the land of Israel. Palestinians periodically make this fantastic claim that has no historical basis. Arabs have lived in the area for roughly 1,000 years, not more than 5,000 as Mr. Erekat maintained. Moreover, a large percentage of today’s Palestinians, including Mr. Erekat, are descendants of tribes from other Arab lands. Mr. Erekat’s family came from a tribe that lives in Jordan and Saudi Arabia and did not move to Palestine until 1860.

Mr. Erekat may be the unofficial minister of propaganda but his boss is no slouch in the Big Lie department. For the last several weeks Palestinian Authority “President” (his term ended a decade ago and he has prevented any elections from being held) Mahmoud Abbas has incited the violence that has resulted in the murder of 19 Israelis since October 1 with his spurious claim that Israel is threatening the Temple Mount.

These are the people Mr. Siegman would have Israel negotiate with, because in his Orwellian world, murderers are peacemakers. Like the anti-Semites advocating boycotts, divestment and sanctions against Israel, Mr. Siegman has no trouble validating a Palestinian right to self-determination in a land where they have never been sovereign while, simultaneously, denying the Jewish people the right to self-determination in the land they have considered their homeland for more than 3,000 years.

Preposterously, Mr. Siegman compares Jews under the Nazis to the Palestinians under Israel rule. This calumny is nothing short of outright anti-Semitism. Jews never terrorized or threatened the Nazis and were targets of a campaign of extermination. Palestinians, however, terrorize the Jews while rejecting any and all peace offers because, like the Nazis, their leaders do not believe the Jewish people have a right to live.

His comparison of the Jewish underground fighting the British with the Palestinian terrorists is equally bogus. The underground was ostracized by the leaders of the Jewish community and their acts of violence condemned. The Palestinian Authority, by contrast, praises the murder of Jews, names schools, parks and streets after the killers, and pays benefits to the terrorists who are captured and the families of those who are killed. In the current paroxysm of violence, the men and women who have stabbed, stoned and run over Jews have been treated as heroes.

Sadly, in claiming that I, an orthodox Rabbi who fights genocide all over the world, is Mr. Goebbels, Mr. Siegman indicts himself, proving the effectiveness of Mr. Goebbels’ approach. He has bought the Big Lies of the Palestinians, hook, line and sinker and now regurgitates them like the Germans who fell under the spell of the Nazis.

But Mr. Siegman is not Mr. Goebbels. Mr. Goebbels was evil incarnate, a monster who erased every human vestige from his countenance. It is a crime to compare anyone to the top Nazis, who exist in their own slime pit of sulfuric hell. Rather, Mr. Siegman has been out of the sun too long. And you know what happens to activists who are passed over, they will say anything to get back in the news. Well, Henry, you made it. You’re back. But the manner of your arrival has brought calumny and disgrace on the American Jewish Committee which you headed.

And they have limited time to condemn your Mr. Goebbels accusation thoroughly and unconditionally before their own credibility starts to erode rapidly as well. 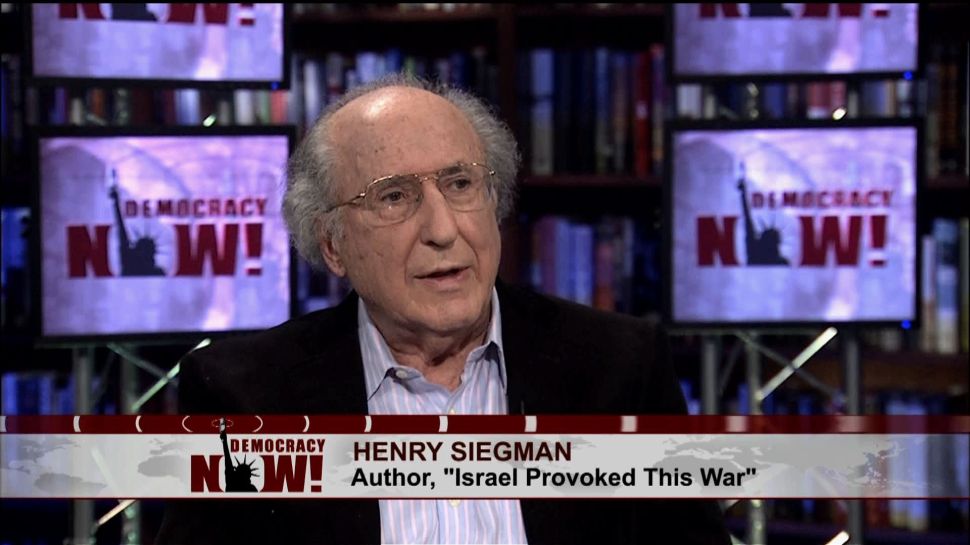