Art isn’t as accessible as music, especially in terms of ownership. For a few bucks you can download any song that strikes your fancy, listen to an album on YouTube or simply share a song with a friend if you want.

The art world, on the other hand, withholds.

Not just anyone is rich or important enough to buy a Jeff Koons painting to put on their wall and enjoy. Yet that sounds like a funny thing to say anyway, doesn’t it? Hang a Koons on your wall? To enjoy?

Perhaps we’ve become numb to the fact that much of what we call art these days has been hijacked for investment purposes, but art can still be about child-like wonder—if you want it to be.

Jim Lambie started his career as a musician in the historic Scottish music scene of the early 1990s, having played with members of the popular group Teenage Fanclub before they found fame. Unsurprisingly, Mr. Lambie retains a deep affinity for the Rock n’ Roll ideals of immediacy and equality, which shines through in the loud, room-filling DIY visual art that he’s been making for about as long as he’s been a musician.

Much like fine art, popular music has a lineage; from pop and punk to britpop and grunge and onward, and Mr. Lambie is a professor of these scenes. His references are plainly acknowledged in his work, much like the British and american bands of his generation that first began to wear their influences on their sleeves, like the Brian Jonestown Massacre’s very literal interpretations of the Stones for example.

These sources—as well as those from art history—are mined and repurposed in Mr. Lambie’s current effort, “Train in Vein” at the Anton Kern Gallery through December 19. The show as a whole is a big ramshackle splash of color; from champagne-colored metallic wall balloon arrangements that mashup Andy Warhol’s glam factory years with 90’s drug-fueled rave aesthetics to his floor-bound multicolored book sculptures that weave multicolored grids of painted books together in order to channel early Dutch modernist Theo van Doesburg (as well as the camp 60s sets featured on “Top of the Pops.”)

The triad of book pieces each frame a different floating lowbrow wonder: an infinite squiggle of connected bike tires, turned-over chairs draped with a multitude of Op-inspired kerchiefs, and a hanging chain that’s flowered by wingtip shoes and cheap sunglasses (a nod both to Magritte and 60’s mod style). The works culminate at the top of the gallery’s planked ceiling, each ending in its own glitzy retro suitcase and each emblazoned with a different play on a legendary punk song title.

The back room houses another Magritte-inflected piece: a steam train engine that emerges from a wall that’s decorated with a yellow, paint dripping sun with the words ‘Easter Everywhere’ arcing above it. The train also happens to be a working smoke machine that was the centerpiece of Mr. Lambie’s own Scotland-based art, poetry, performance and music venue, the Poetry Club.

All of Mr. Lambie’s works are gangly and uncentered—particularly the multi-part, ceiling-to-floor “book” works—which look difficult to own and live with. But for Mr. Lambie, that isn’t the point of art. The point is to reach from deep within himself and (in a flash) affect you much in the way Johnny Rotten could, even if it means using cheap materials or less “conceptual” strategies.

So if you (like most people) can’t afford to buy art, go look at the both the Jim Lambie and Jeff Koons exhibitions, and then ask yourself “which of these shows do I enjoy?”

Hopefully museums are listening for the answer. 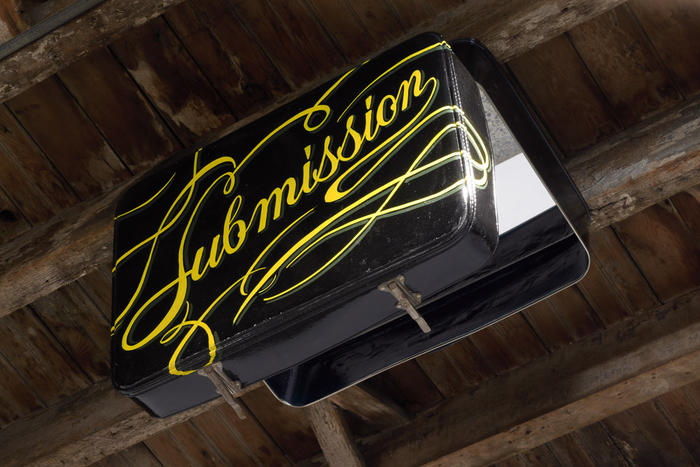