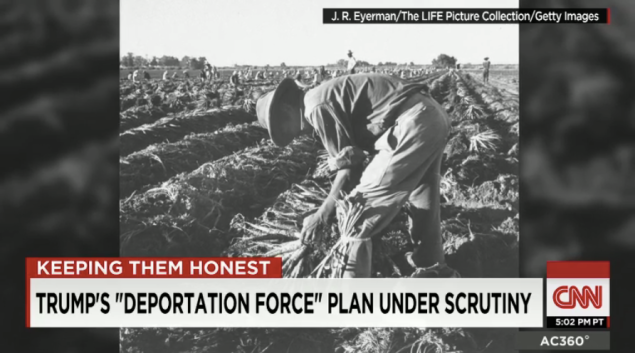 It’s called television for a reason and the “vision” part is important. Anderson Cooper on CNN demonstrated this Wednesday on 360 with a few scenes from a simple black-and-white newsreel, the kind they used to show between feature films in movie theaters.

“’WET BACKS,’” ran the headline on the screen. “Hundreds of alien workers rounded up.”

The reel’s images from the 1950s showed lines of brown-skinned people being frisked and herded into Department of Justice buses for deportation back to Mexico under a program of President Eisenhower. Cops escorting them wore cowboy hats.

“It was inhumane, it was abusive,” historian Douglas Brinkley told Mr. Cooper. “Many had their heads shaved. Many were beaten and abused… Mexicans died in the desert because they were pushed out of the United States.”

The ethnic slur in the newsreel headline would never be used on television these days, not even by Fox News Channel. But the issue is much the same and, at the moment, it is dividing the Republican presidential campaign.

Donald Trump, who leads in most of the polls, wants to build a giant wall on the Mexican border and deport approximately 11 million undocumented people to the wall’s other side. In Tuesday’s debate, Mr. Trump cited the Eisenhower-era deportation as a model of what he’d like to do.

And some candidates—like Governor John Kasich (R-Ohio)—think it is a bad idea.

“I don’t think you win Ohio with that message,” he told Fox host Sean Hannity.

The newsreel shown by Mr. Cooper on Wednesday was so powerful that two hosts on rival cable networks picked it up Thursday to illustrate their take on the same story.

‘Is he going to turn this country into a Gestapo state? It’s political suicide for the Republicans.’

One was Chris Hayes, whose MSNBC show All In takes a liberal point of view on most issues. The other was The Kelly File on Fox, where conservative opinion and selective outrage are the foundation of the show hosted by Megyn Kelly.

Everyone’s been opining on this all week, including one of Mr. Cooper’s guests, Sam Clovis, Mr. Trump’s national campaign co-chairman. Mr. Clovis, a full-faced man, gets flushed and florid when angry and, boy, he was angry Wednesday.

“Let me finish!” he ordered Mr. Cooper. “This whole notion that this would be done inhumanely and we’d be ripping families out of their homes and separating families is utter nonsense. What it’s about is to stir up the emotions as opposed to rational, learned thinking about how we would go about establishing the rule of law in this country again.”

His statement annoyed another guest on the show, Maria Cardona, a former advisor to Democratic Presidential candidate Hillary Clinton.

“It’s a ridiculous, stupid idea,” she said of Mr. Trump’s deportation plan. “Is he going to turn this country into a Gestapo state? It’s going to be political suicide for the Republicans.”

A similar but more subtle opinion came from President Barack Obama, who spoke of how visual stimuli can send a powerful message. In a clip from an ABC interview, shown by Mr. Hayes, Mr. Obama said:

“Imagine the images on the screen, flashed around the world, as we were dragging parents away from their children and putting them in detention centers.”

Wednesday night’s edition of The Last Word with Lawrence O’Donnell on MSNBC included a long piece about Sen. Cruz and his chances of winning the nomination with hard-right rhetoric and conservative policies. While guests talked about Mr. Cruz, producers and editors put up relevant video clips.

Curiously, they twice showed montages of Mr. Cruz from still photos, four at a time, using the “Ken Burns” effect of moving the camera up and down the pictures, then back and forth, then in and out, to create the illusion of motion. The first four images were of medium-distance shots. The second four images, shown a few minutes later, were tight shots of his face.

It was a nicely produced element. Even those who oppose Mr. Cruz—including many of his fellow Republicans—must admit that there is something powerful and visceral about his speaking style and his appearance. Even in still shots like those used by MSNBC, he seems to leap off the screen.

On Thursday night, when Mr. Hayes discussed Mr. Cruz’s rivalry with Mr. Rubio, the screen showed an image of Mr. Rubio in a business suit next to an image of Mr. Cruz wearing camo and toting a shotgun.

In the debate, defensively but aggressively, Mr. Cruz said of his deportation desires: “We’re tired of being told it’s anti-immigrant.” He uses phrases like “the rule of law” the way George Wallace used to say “law and order.”

He mentions the Bible whenever he can, even when denigrating the Internal Revenue Service. On All In Thursday, Mr. Cruz was shown denouncing the immigration reform effort of 2013, a plan Mr. Rubio help shape.

“They fought tooth and nail to try and jam this amnesty down the American people’s throat,” said Mr. Cruz, who can mix metaphors with the best of ‘em.

“Cruz is smart as hell,” Mr. Dean said, “and he just got ‘im.” On Sean Hannity’s show on Fox Thursday, Michelle Malkin said: “When push came to shove, Ted Cruz was on the right side and Marco Rubio was on the wrong side.

Paul Begala, the old Clinton hand and liberal Democrat, told Mr. Cooper of Mr. Cruz: “He’s the guy I might bet on… if I was seriously going to put money on it.”

Pundit S.E. Cupp, speaking on CNN about Republican debaters: “When is someone going to turn to their left and say ‘Mr. Trump – or Mr. Carson – that makes no sense.’” (Mr. Carson said Tuesday that the Chinese military has entered the Syrian civil war, which was news to all, including China).

Charles Krauthammer of Fox News talking about online polls a year before the election: “If online polls are predictive, we would now be in the 16th year of the Ron Paul administration.”

On MSNBC, Perry Bacon telling Chris Matthews on Hardball: “Ben Carson just simply has not studied and does not know what he’s talking about.”

Author Jon Meacham on the marriage of Bill and Hillary Clinton: “It is the most fascinating political marriage since Franklin and Eleanor.”

Megyn Kelly of Fox, joking with a member of a Republican focus group: “You want somebody who’s going to get along with others? Are you really a Republican?”

Rachel Maddow of MSNBC compared the bitterness of this campaign with what she called “the visceral, nasty, decades-long public hate fest between George H.W. Bush and Bob Dole.” It was a good, long piece with old footage and insightful historical perspective. It might have been great at half the length… Ms. Maddow on Thursday ran a quirky segment about the woman who sat behind Mr. Trump at a speech in Springfield, Ill. and ostentatiously read a book of poetry, seen on camera to Mr. Trump’s left. Her name is Johari Osayi Idusuyi and she told Ms. Maddow that she felt Mr. Trump was disrespectful to a protestor when he shouted “Get out of here!”

Ohio governor and presidential candidate John Kasich on Republican prospects: “If we’re a party that runs around saying we should get rid of Medicare, how do you think we’re going to do next fall against Hillary?”

Peggy Noonan telling Chris Matthews on MSNBC her reaction to Donald Trump’s militant anti-immigrant statements early in the campaign: “I thought, ‘Whoa! This is going to be big. He has hit a throbbing nerve in American life.”

Most everyone mentioned that Mr. Cruz made and survived a debate mistake by promising to eliminate five government departments and naming only four. In poker, a guy like this is called a “four-flusher.”

GRUESOME IMAGES: Several shows used the surveillance video from 2013 in which a black man, Linwood Lambert, is tasered by white cops in South Boston, Virginia. He was high on cocaine and kicked out a squad car window when police tried to take him to a hospital. He died in police custody and his death resulted in a wrongful death lawsuit. Hence, the video evidence. So ubiquitous are cameras now that the scenes come from several angles and several locations. All of it is edited together seamlessly with professional flair. To some observers, it seems sort of like police executed by electrocution a wild man on drugs. Watching it is both hideous and riveting. 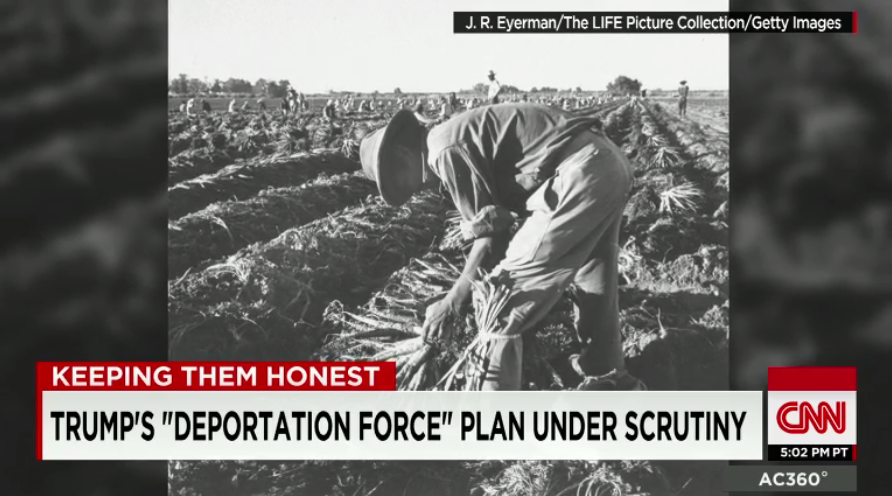