The race to fill a vacant Queens City Council seat on the Long Island border is pitting a Democrat aligned with the popular prior councilman against a Republican promoting himself as an antidote to the deeply unpopular mayor.

“Our district out here is much closer to a Nassau County type of district, or a Staten Island district, than it is to Manhattan,” Barry Grodenchik, the Democrat in the race, which will be decided tomorrow, told the Observer.

The seat opened up after sitting Councilman Mark Weprin announced in May he would be stepping down to take a post in Gov. Andrew Cuomo’s administration, having spent six years representing the area in the Council. Mr. Weprin, like his brother David Weprin who represented the district before him (and now holds his old seat in the Assembly), was a loyalist to the Queens County Democratic Party.

Mr. Grodenchik served in the Assembly for a single term between 2002 and 2004 and worked under three borough presidents, rising to the position of deputy borough president in 2010—and he became the county organization’s pick in its bid to hold onto Mr. Weprin’s seat, receiving a slew of endorsements from fellow politicians and from unions. He triumphed in a tight six-way primary, running on what was essentially a message of continuity.

“People are very happy living in this community. In many cases, I run into people 40, 50, 60, even 70 years, which is a record, at the same address,” he said. “I’ve been touting my experience, the voters responded, the Democratic voters, and I believe that all voters are going to respond to that message, and I think it’s a good message.”

His GOP opponent, Joseph Concannon, offered a far less optimistic appraisal of the prevailing attitude in the district—crime spiking in one of the four police precincts the district spans, local Martin Van Buren High School turned into a “failure factory” thanks to kids coming in from troubled areas of the city, and a mushrooming street population in the places where many residents work. But the target of the rage in Mr. Concannon’s campaign literature and stump speech isn’t Mr. Grodenchik: it’s Mr. de Blasio.

“They see the homeless out in the street, they read the papers,” the Republican told the Observer. “They’re actually appalled. They think the mayor is a national embarrassment. And that is, that is in every corner of the district.”

A veteran of the NYPD, the FBI and the United States Air Force, Mr. Concannon has unsuccessfully sought public office twice before: challenging State Senator Tony Avella in 2012 and Mr. Weprin in 2013. But he argues this race will be different thanks to Mr. de Blasio, and has advertised his campaign as a “midterm message” to the mayor. The candidate has collected endorsements from a number of leading Republicans, including former Mayor Rudolph Giuliani, under whom he once worked as deputy director of public safety.

Mr. Concannon doesn’t have too much to say about Mr. Grodenchik, who battled a former de Blasio aide in the Democratic primary, and whose Queens County backers bitterly but unsuccessfully opposed the mayor’s efforts to usher ally Melissa Mark-Viverito into the Council speakership. He called his opponent a “very nice man,” but dismissed him as a shill for the Democratic machine.

“Barry reminds me of the gargoyles that you’ll find on top of the big buildings in Manhattan,” he said. “They’ve been up there so long, since the 1920s, and they never change. They collect a little dust, and every so often somebody goes up and cleans them off. And that’s what the Democratic Party did when they rolled Barry out for this district. They cleaned off one of the gargoyles, and they said, ‘Alright, go ahead, you’ve got our permission: run.'”

“He owes the organization so much. He’s the inside guy. He’s the one who’s been part of Democratic politics for years,” he added.

Mr. Grodenchik criticized Mr. Concannon for his focus on Mr. de Blasio, and described himself as “a good Democrat” but also as a “moderate” and “an independent Democrat.”

Political observers agreed distaste for the mayor in the district is strong—one of Mr. Grodenchik’s rivals in the Democratic primary, co-op leader Bob Friedrich, captured almost a quarter of the vote running on a fiercely anti-de Blasio platform. But is that anger enough to tip a historically blue district into the red?

Consultants who have managed campaigns in overlapping districts argued ‘no,’ pointing out that Republicans have not mounted a successful Council campaign in Queens since Dan Halloran’s election in 2009.

“While there are some pockets of Reagan Democrats, the 23rd Council District is a Democratic bedrock,” said Austin Finan, who has worked on a number of Democratic campaigns in area. “If there is any anger, if there is any disapproval, it won’t be enough to overcome the enrollment advantage.”

There is also a question of how much clout either man will be able to wield in the City Council. If Mr. Concannon were to succeed he would find himself part of a four-member minority in a 51-member body. In Mr. Grodenchik’s case, most important committee chairmanships belong to Ms. Mark-Viverito’s allies in the Progressive and Brooklyn caucuses. Mr. Weprin was permitted to hold onto his influential chairmanship of the Subcommittee on Zoning and Franchises last year due to his personal popularity among his fellow members, but sources said he stepped down out of frustration with the Council and its direction.

Both Mr. Grodenchik and Mr. Concannon asserted they would be able to successfully build alliances and consensus with moderate Democrats representing middle-class communities in the outer boroughs. But a victory for Mr. Grodenchik would mean keeping the seat safely in the Queens Democratic column going into the next election cycle, when Ms. Mark-Viverito will be term-limited out of office and Congressman Joseph Crowley, the county chairman, will certainly look to play a role in picking her successor—especially after being shut out of the decision in the last go-round.

“Barry Grodenchik is more likely than not to be a reliable vote for the Queens County Democrats in the future leadership decisions in the City Council,” Mr. Finan said.

But Mr. Concannon argued that it’s that same Queens machine that left the district with no voice in the Council after Mr. Weprin exited.

“The voters of Queens will remember this one thing: it was the Democratic Party that left them for five months with no representative in this office. I stand ready to assume duty on the fourth of November,” the Republican said. 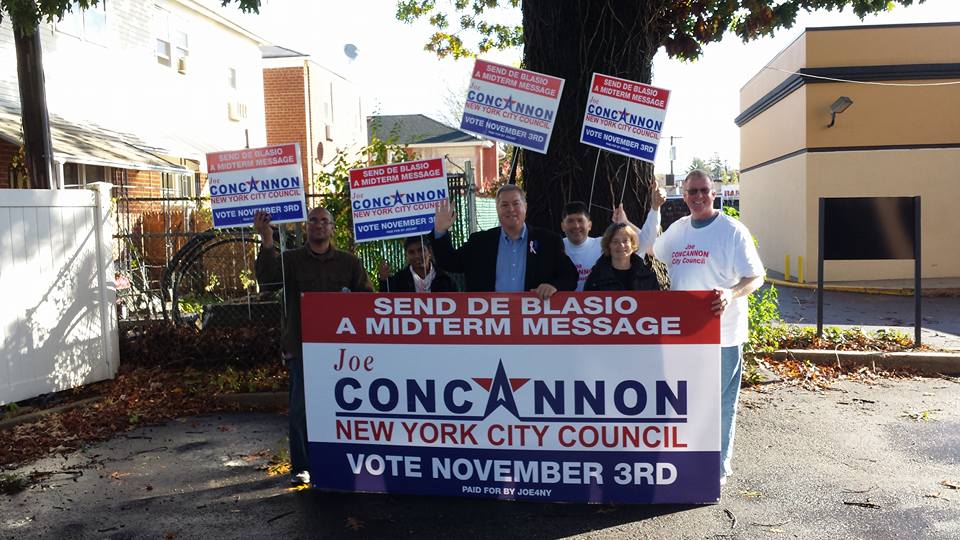