Midway through ‘Books from Beyond,’ our third helping so far of Starz’s Ash vs Evil Dead, Ash Williams tries to justify banishing evil by summoning even more evil from the Necronomicon Ex-Mortis: “It’s like spilling paint on a painting. It’s okay because there’s already paint on it.”

Now this line is as endearingly braggadocious as it is fundamentally wrong — as most things are that come out of Ash’s mouth — but it did get me thinking about Ash vs Evil Dead as a whole. Because following the pilot written and directed by Sam Raimi, this show is the first Evil Dead material (not counting the 2013 remake) in which other writers and directors are attempting to keep the original Raimi aesthetic intact. In a way, it is a lot like spilling generic paint on to a masterpiece portrait. So is the result still okay?

For the most part, the answer is yes. Director Michael J Bassett, who also helmed last week’s Bait, throws in enough classic Dead tricks to keep the tone correct, while still throwing in flair of his own (The demon Eligos reminded me of something out of a Silent Hill movie, one of which Mr. Bassett directed in 2012) And episode writer Sean Clements did scare up some top quotes (On churros: “That’s not racist, Pablo, that’s just a great dessert”). It’s only occasionally that cracks show through, like an unneeded erratic camera technique or an Ash quip that jumps the line between lovably jock-ish to straight mean-spirited. It’s those moments where you can see the spilled paint on the original painting.

Or maybe I’m thinking too hard about a show that strives — and damn well succeeds — for nothing more than to entertain your balls off for a half hour every Saturday. ‘Books from Beyond’ kept up what seems to be the structure of Ash vs Evil Dead, which is if you can’t have a feature film set in a single cabin in the woods, we’ll move the story week-to-week to a different, single claustrophobic setting. This week, Lionel Hawkins’ shop-for-the-macabre Books from Beyond, where Ash hopes to get more info on the infamous book of the dead, bringing Pablo and Kelly along for the ride. It’s the least he can do after shooting Kelly’s admittedly dead-at-the-time mother in the face.

We get some background info on the Necronomicon Ex-Mortis, which I think might totally confirm the removal of Army of Darkness from the show’s canon (something about Raimi not owning the rights). Here, the book was written — in human blood, of course, and naturally bound in flesh — by beings “not quite human, not quite demon” called The Dark Ones. The book acts as a gateway of sorts, through which someone “either really evil or really stupid” can summon demons from the underworld.

Which is perfect, because that’s exactly how Ash plans to rid the world of evil — simply summon a demon and ask for the undo button. He settles for Eligos, a technological demon: “He sounds like a total nerd,” says Ash. 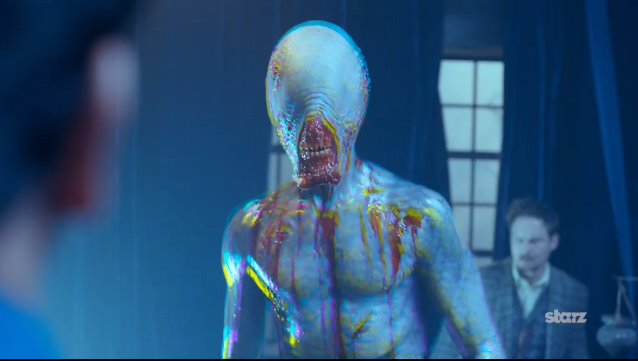 Visually, no matter who is behind the camera, there remains nothing like Ash vs Evil Dead on TV right now. As someone with zero experience in digital effects, I don’t know what to even call the unsettling mix of prosthetic makeup and CGI done on that character design up there, but I do know it’s the exact kind of unique, stomach-churning entertainment that makes Ash vs. Evil Dead stand-out.

If anything, the design and feel of this show actually elevates what is a pretty weak story so far. Because of course the summoning goes wrong, and of course Bruce Campbell gets thrown around and, of course, Eligos is once again banished. And it’s fun. Really! But over an entire season, “Ash and Co. show up, Deadites and demons arrive, fight, wash rinse repeat” isn’t going to hold up as the entire story.

The answer to this problem could be Lucy Lawless’ as-yet-unnamed character (if you’re not aware, here’s a spoiler-y answer to who she is), who so far has gotten two very, very short and self-contained appearances. But she’s a story variable, and interesting one, and what seems to be another obstacle for Ash that for once isn’t dead. “I’ve learned I can always make things more painful,” she says in a memorably opening scene, and that’s a good thing. Because so far — despite Deadite-possessed elderly women, a disastrous dinner party, and a mind-breaking demon from the underworld itself — the story still just doesn’t seem painful enough.

-Is it just me, or are all of our supporting players just different parts of Ash’s personality, broken up into individual people? Detective Amanda Fisher is the ass-kicker, Kelly is the smart-ass, and Pablo is the resilient-but-terrified coward underneath it all.

-Best one-liner was Ash to the demon: “First of all you don’t look anything like your photo, so you might want to update that.”

-The dialogue concerning lone-wolf Ash accepting Kelly and Pablo as companions was a bit stilted — most likely purposely — but I do love the idea that Ash is allowing his outer layer of bravado to break down even a little. Whether or not it’s a genuine move is a different question.

-So apparently the key to undoing what Ash started is in this passage: “The annulment lies inside the origin of the man.” Your guess as to what that means is as good as mine, but I have a feeling “the man” isn’t Ash, after all. Is it Pablo? Amanda Fisher? Aloe Blacc?? Only time will tell.

-If you noted correctly that the headline of this recap references a British horror film from 1972…congrats! You’re just as big a nerd as I am. 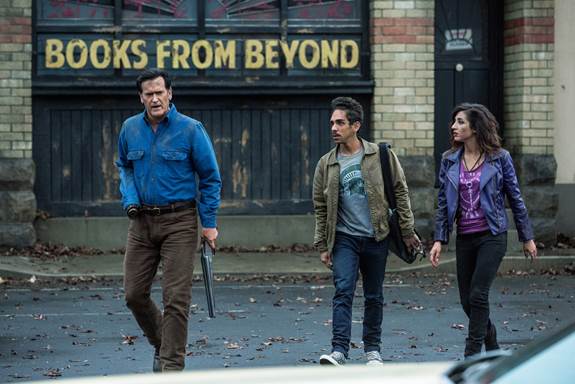