You can almost picture all the marks on a checklist that Ash vs Evil Dead had to notch off to update the Evil Dead film franchise of the 80s for 2015’s so-called Golden Age of TV…replacing an old, wooden hand with a shiny, mechanical fist, if you will. An Evil Dead story starring Bruce Campbell, but not directed or written by Sam Raimi? Check. Not one sustained Evil Dead film, but an extended, season-long (and possibly multi-series long) story-line? Check. Lucy Lawless, a familiar lead actor NOT named Bruce Campbell? Check…well, for the approximate 90 seconds of screen time she’s had so far.

Last night’s episode seemed to pencil in the biggest, and perhaps most important check mark of them all — an episode where Ash himself played little more than a background character. Hell, that mouth of his which so often spews the one-liners Evil Dead is known for was tied up with a gag for more than half the episode.

‘The Host’ was all about Kelly and Pablo, two character who bear the unenviable task of stepping out of the one-handed shadow of Ash Williams. The scene Pablo and a very, very demon-possessed Kelly rummaging through Ash’s trailer oozed with the idea Ash isn’t the stone-cold badass he was in his youth. His trailer is instead stocked with a man-girdle, an unused roll of Magnums, and a Ziploc bag of cheap weed.

Not that Kelly and Pablo are the definition of cool, either. In fact, it’s Pablo’s timidness –his hesitation to smoke, his desire to kiss Kelly right on the forehead (“boop”) — that saves him from a marijuana-laced shotgun shell right in the mouth courtesy of Elegos.

As for the exorcism itself that took up the back-half of the episode, it was filled with just enough blood, guts, vomit and even a little urine to make long-time Evil Dead fans smile and newcomers squirm. I’m not sure I enjoyed the fact Elegos came flying out of Kelly’s mouth with about as much provocation as Marty McFly being called a chicken. But Ash vs. Evil Dead isn’t really about the resolutions, anyway, it’s more about the nausea-inducing visuals it can throw at you along the way. Even set in a mythology never light on demon-possession, Ash vs Evil Dead‘s latest exorcism still managed to churn out some truly unique visuals. Elegos’ hand making its way up Kelly’s chest was a standout, and anyone munching a mouthful of slugs is good for a recoil. The “demon of the mind” himself, freed from Kelly’s body, was still somehow freakier than anything American Horror Story has conjured in all its five seasons.

In the end, as all stories should, we circled on back to Ash, who finally realized Deadite-slaying, boomstick-wielding motherf*ckers simply shouldn’t be thinking nearly as hard as he was, and should be shotgunning demons in the face a whole lot more. Ash blowing Elegos away was a violently enjoyable stamp on a multi-episode arc, even if the demon did explode into what looked uncomfortably like that disgusting blue Mountain Dew they sell at Taco Bell. With the death of Brujo, the Ghostbeaters are down to the original trio, albeit without any concrete destination in sight.

With that said, who out there wasn’t crossing fingers for that final shot of Ash’s trailer flying down the highway to be interrupted by the sight of Ruby’s orange-and-black Charger in pursuit?

-The fact that a show –not to mention an EVIL DEAD show–felt it needed to CGI demon-vomit felt wrong to me. Was there seriously not a corner store near set that sold pea soup? Did we not have this effect down all the way back in 1973?

–Best one-liner: “Well, most guys would look past it,” Pablo, justifying his forehead-kiss fantasies.

-Demon of the mind or not, I have to question Elegos’ intelligence if he feels the need to kill Pablo with an elaborate ruse involving a shotgun and some weed instead of, you know, just murdering him.

-I’ve mentioned how Ash was relegated to the background for much of this episode, but I also felt even when pushed to the forefront he was less “snappy, badass Ash” and a newer sort of “old uncle Ash Williams.” Even with his promise to shove his new and improved hand right up a Deadite’s ass, I can see Ash vs Evil Dead ultimately trying to do the impossible — make Ash Williams grow up a little. 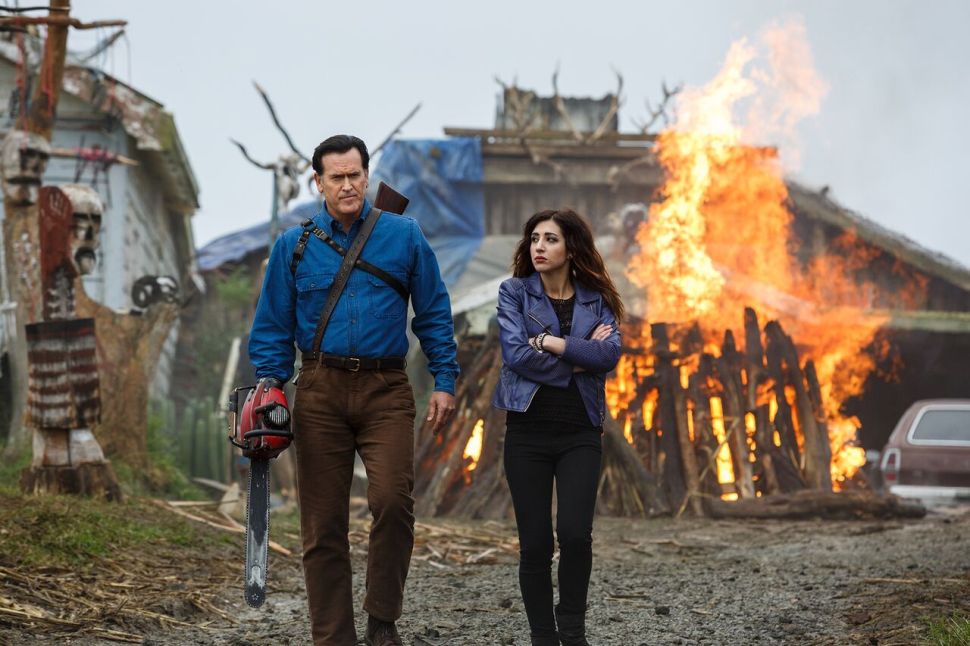