NEWARK – The steps of the Newark City Hall were crowded Tuesday with airport workers as they kicked off a 24 hour fast in an effort to push for a $15 minimum hourly wage and union rights. The workers were joined by Newark Mayor Ras Baraka and Congressman Donald Payne Jr. (D-10) as they pledged their commitment to the cause.

Last week thousands of those workers went on strike at seven of the busiest airports in the nation, including Newark. There will be fasts at 11 national airports.

“All Americans deserve a living wage,” Baraka said from the steps of City Hall. “You shouldn’t intimidate them.” Baraka referenced the suspensions that took place last week in Newark after three striking airport workers tried to return to work (initially, it was thought the workers were fired but they were later allowed to return to work).

“I will always be there for working people,” said Payne as he discussed how he had been a member of three unions. “This doesn’t have to be a long process because we know what we want. $15 is the bottom but there has to be a floor.”

The event was organized by members of the SEIU 32BJ union. As speakers came to the podium, they started chants of “32BJ.” State Director Kevin Brown and Executive Director of SEIU State Council Lizette Delgado-Polanco also spoke. Analilia Mejia was there representing Working Families.

In addition to the union members, the rally also had support from clergy and Newark city council members.

Wednesday is one of the busiest travel days of the year ahead of Thanksgiving on Thursday. The airport workers will continue their action on Wednesday at a press conference at Newark Liberty Airport. There they will be joined by Mayor Baraka, State Senator Ray Lesniak and Assemblyman Jamel Holley.

Many airport workers—including terminal cleaners, cabin cleaners, skycaps, wheelchair agents, customer service agents, terminal security officers, ramp workers and baggage handlers—currently make $10 per hour as mandated by the Port Authority of NY/NJ. Though that number is significantly higher than the state minimum of $8.38 per hour, workers claim that they are struggling to make ends meet on those wages. 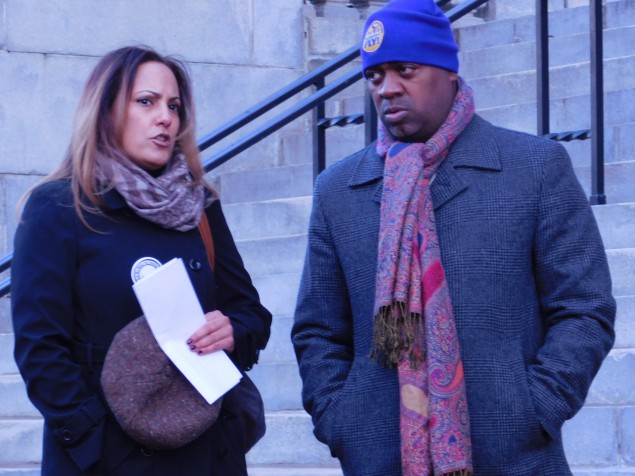