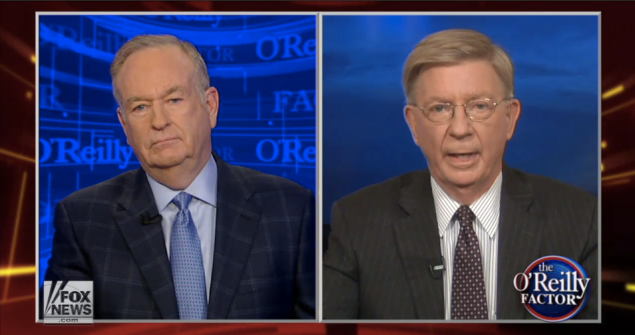 Conservatives Bill O’Reilly and George Will both work for Fox News Channel, but the right-wing network better not invite this pair to the same War-on-Christmas party this holiday season.

Briefly put, Mr. Will said Mr. O’Reilly slandered the memory of President Ronald Reagan by writing about a 1987 memo from a White House aide, James Cannon, to Mr. Reagan’s chief of staff, Howard Baker. It suggested Mr. Reagan might not have been functioning 100 percent mentally and might have to be removed from office.

In his column review of Killing Reagan, Mr. Will wrote:

The book’s perfunctory pieties about Reagan’s greatness are inundated by its flood of regurgitated slanders about his supposed lassitude and manipulability. This book is nonsensical history and execrable citizenship, and should come with a warning: ‘”Caution – you are about to enter a no-facts zone.”

The last comment referred to Mr. O’Reilly’s “no spin zone” promise at the beginning of each show. Mr. O’Reilly (in New York) began the conversation by charging that Mr. Will (in Washington) did not call Mr. O’Reilly before publishing his column, a promise, Mr. O’Reilly said, that was conveyed to him by a Fox News executive.

In the world of right-wing political television, the argument is won by neither facts nor reason but by he who interrupts the most and shouts the loudest.

Mr. Will said this was a misunderstanding and that Mr. O’Reilly has Mr. Will’s phone number and could have called him. Before long, Mr. O’Reilly began to raise his voice and talk over his guest, a Fox tactic usually used only on moderates or liberals.

This annoyed his guest.

“OK, my name is ‘O’Reilly,’” Mr. O’Reilly said. “By writing a provocative column like this, you had an obligation as a journalist” (to call Mr. O’Reilly first).

When Mr. O’Reilly suggested that the memo’s author repudiated the memo about Mr. Reagan under pressure from above, Mr. Will laughed mirthlessly. This raised Mr. O’Reilly’s ire.

“What are you laughing at, Will?” Mr. O’Reilly said, loudly, pointing his right finger (pen in hand) and scowling.

WILL: “You’re something of an expert on actively misleading people.”

Later, when allowed to speak, Mr. Will said:

“You, who began this interview saying I had a moral obligation to call you before writing about your book, wrote a book without feeling any obligation to talk to Ed Meese, George Schultz, Jim Baker—any of the other people… because they would have refuted the flimsy thesis you had.”

The three men mentioned were top aides to Mr. Reagan.

Annoyed again, Mr. O’Reilly told Mr. Will the best way to report is not to talk to anyone who had “skin in the game, emotion in the game, spin in the game.” He also scolded Mr. Will for not writing that the book was laudatory to Mr. Reagan.

Mr. Will responded that Mr. O’Reilly was “doing the work of The Left” which is to discredit Mr. Reagan and destroy conservatism. He accused Mr. O’Reilly of “extreme recklessness” and added “I do not understand how you vet a memo you’ve never seen.”

The truth is the Republican Party is in chaos because they don’t know what they stand for anymore.

Mr. O’Reilly responded by saying “Here’s the deal. That memo was written. That meeting took place.”

He pointed his finger again at the camera.

Mr. Will, a public intellectual with a fine mind, is this era’s version of William F. Buckley, although Friday’s tiff fell short of Mr. Buckley’s memorable war of words with Gore Vidal during the Democratic convention of 1968. Mr. Will used to work at ABC News, where discourse is generally more genteel.

The scene between Mr. O’Reilly and Mr. Will was similar to one a few months ago on The Charlie Rose Show on PBS when New York Times columnist Paul Krugman argued with MSNBC’s Joe Scarborough.

Mr. Scarborough mau-maued Mr. Krugman in much the same manner as Mr. O’Reilly did to Mr. Will. Both Mr. Krugman and Mr. Will learned that in the world of right-wing political television in 2015, the argument is won by neither facts nor sweet reason but by the person who interrupts the most and shouts the loudest.

Most of the Sunday news shows did at least a few minutes about Donald Trump’s appearance on Saturday Night Live on NBC. Mr. Trump leads Republican Presidential candidates in most polls with the election about a year away. Despite many clips, all networks avoided the tasteless skit showing Mr. Trump as “Donald Tramp” being touted by two “former porn stars.” On Fox News Sunday, Congressman Michael McCaul (R-Texas) blamed Russia’s intervention in the Syrian civil war on U.S. President Barack Obama. “When you project weakness and having a failed foreign policy throughout the world, this is what you get,” he told Chris Wallace. On the same program, New Jersey governor Chris Christie—whose low poll numbers knocked him off the main stage for Tuesday’s debate in Milwaukee on Fox Business Channel—said, “We’re getting walked on around the world.” None of the shows mentioned that unemployment fell to five per cent on Friday. Mr. Wallace, commenting on Mr. Trump’s TV appearance on the comedy show, said, “I haven’t watched Saturday Night Live since about 1978 and actually I think that’s the last time it was funny.” Karl Rove, discussing the President’s rejection of the oil pipeline from Canada to the Gulf of Mexico, said Mr. Obama is “frankly, delusional” and spoke “gobbledygook” at a news conference on the subject.

On Meet the Press, Chuck Todd threw it to Chris Jansing at JFK airport where she asked Dr. Ben Carson about all the recent confusion between what he wrote in his autobiography years ago and the true facts about his violent past, his chance to go to West Point and his protecting his white classmates in Detroit during rioting after Dr. Martin Luther King was assassinated in 1968. As Rachel Maddow later said, Dr. Carson’s stories “cannot be corroborated.” Dr. Carson thinks the media is picking on him because he is “a threat to the secular progressive movement in this country.” Mr. Trump made the rounds of most of the shows by calling it in by phone, making sure to repeat all the gossip about Mr. Carson while assuring viewers he admires Mr. Carson even if his dear friend is suffering from a “pathological disease.”

“That’s a problem,” Mr. Trump told Mr. Todd. “He wrote it. I didn’t write it. He’s going to have to explain a lot of things away.” Democratic candidate Bernie Sanders, the independent socialist U.S. Senator from Vermont, appeared on a remote hookup and said, of Dr. Carson, “This man wants to abolish Medicare.” On Mr. Todd’s panel, Gwen Ifill of PBS said Dr. Carson has “great self-regard.” In real news, Senator Diane Feinstein (D-CA), vice-chair of the Senate Intelligence Committee, discussed the Russian incursion into Syria. “My hope is Russia will take a strong stance against ISIL,” she told Mr. Todd, referring to the Islamic State. “We will fight them now or we will fight them later. It’s only a question of time.”

On ABC’s This Week with George Stephanopoulos, Mr. Trump phoned in an order as if were room service. “I’m not looking to quagmire,” he said of his Mideast war thinking. “I’m looking to take the oil. I want to take the oil. I want the oil. I’m all for Russia going in and dropping bombs on ISIS. We don’t have to have exclusivity.” Mr. Sanders told Mr. Stephanopoulos that “once we get suckered into this… I fear a permanent U.S. war in this region.” Mr. Sanders also said American wealth inequality has reached a “grotesque level.” Mr. Trump often brags about his wealth. On the ABC panel, Maggie Haberman said, “Trump has shown us that you can say things that are demonstrably not true and as long as you say them with authority, it doesn’t seem to matter.” Donna Brazile, on another topic, said, “The truth is the Republican Party is in chaos because they don’t know what they stand for anymore.”

On Face the Nation on CBS, John Dickerson took Mr. Trump’s phone call early and Mr. Trump told him, “I just don’t know what to think” about Dr. Carson’s theory that the pyramids of Egypt were built for grain storage and not to bury the Pharohs. Regarding the crash of the Russian civilian airplane traveling between Egypt and Russia, most pundits accepted the American government’s inclination to think it was caused by a planted terrorist bomb. As to what it means, former CIA Deputy Director Michael Morell told Mr. Dickerson that Russian President Vladimir Putin would tell his people “I’m going to get revenge.” Mr. Dickerson got a few yucks by showing the video of President Obama chiding the Republicans for complaining about debate moderators. “If you can’t handle those guys,” Mr. Obama said, his smile wide, “I don’t think the Chinese and the Russians are going to be too worried about you.”

On State of the Union with Jake Tapper on CNN, Mr. Trump called to say about the Saturday Night Live sketches: “We kicked out a couple of them that I thought maybe went a little too far.” He seemed worried about Dr. Carson’s health. “He talked about how he has pathological disease,” Mr. Trump said. “It’s a serious statement.” Senator Rand Paul (R-KY), also a Republican Presidential candidate, discussed with Mr. Tapper Jon Meacham’s new biography of former President George H.W. Bush. In the book, the senior President Bush is harshly critical of former vice-president Dick Cheney and former secretary of defense Donald Rumsfeld, who worked for his son, former President George W. Bush. “Dick Cheney’s been wrong about most of the foreign policy the last few decades,” Mr. Paul said.

On CNN’s Fareed Zakaria GPS, the host presented an alarming picture of poverty and financial crisis in Puerto Rico. When Mr. Zakaria interviewed Martin Wolf, the chief of economics for The Financial Times, Mr. Wolf (who speaks British) said: “I can’t believe Donald Trump is right about anything. And some of the propositions he’s putting forward seem to be basically mad… You can’t round up 11 million people and throw them out.”

On Reliable Sources on CNN, Brian Stelter said of Mr. Trump’s SNL appearance, “The merging of political and pop culture is complete.” Ever notice that CNN puts most names at the bottom of the screen but never Mr. Stelter’s? Nice interview with Felix Sanchez, representing the National Hispanic Foundation for the Arts. Referring to protesters outside NBC and Mr. Trump’s record of harsh generalities about Mexicans, Mr. Sanchez said NBC’s decision “was really about choosing ratings over respecting the community.” Mr. Sanchez said there soon will be a Latino media summit.

Media Buzz on Fox with Howard Kurtz featured an unusual piece on the death of John Lennon, with two doctors telling greatly different stories about the massaging of Lennon’s dying heart on the operating table. Both took credit. Operating room personnel took the side of the resident on duty, not the supervisor called in who got most of the credit. Think of it: On December 8, it will be 35 years since Lennon was murdered in front of his Dakota apartment building on Central Park West. If you weren’t alive then, maybe you can imagine. 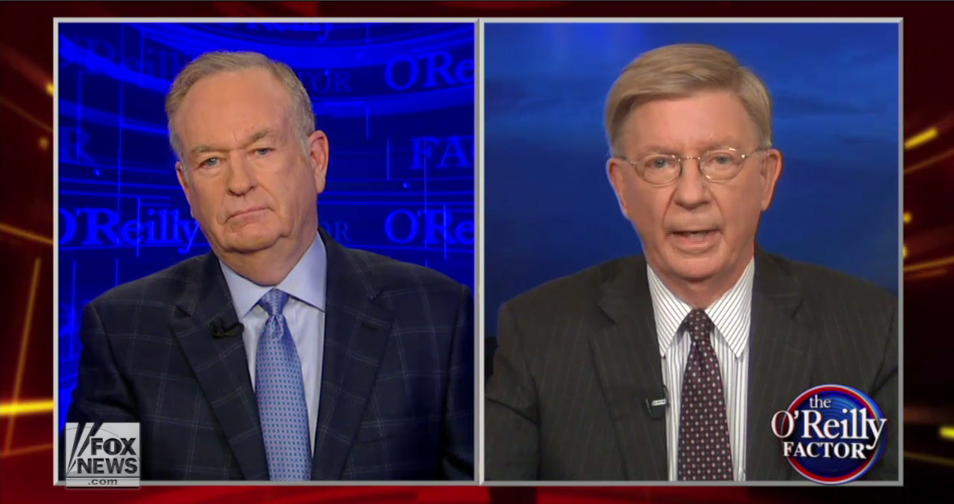