A 12.03 carat cushion-cut, fancy vivid blue diamond dubbed “The Blue Moon” has just crushed the world auction record for any gemstone, selling for $48.5 million at Sotheby’s Geneva with the buyer’s premium.

The previous world record was set at Sotheby’s Geneva in 2010 when the Graff Pink, a 24.68 carat step cut pink stone, sold for $46.2 million to English jeweler and Graff Diamonds founder Laurence Graff.

“The Blue Moon” sold to a Hong Kong private collector, who has swiftly renamed it “The Blue Moon of Josephine,” according to a Sotheby’s official.

Could the buyer be Stanley Ho, the wealthy Hong Kong-based business man and casino owner, Macau’s so-called “King of Gambling”? Mr. Ho just so happens to have a singer/actress daughter named Josephine, and has publicly bid at Sotheby’s in the past.

The house declined to comment on the buyer’s identity.

UPDATE: The buyer of the “Blue Moon” diamond—who also snapped up the 16.08 carat pink diamond that sold at Christie’s Tuesday evening for $28.5 million—was Hong Kong billionaire Joseph Lau, according to a report from the AP. Mr. Lau, a property developer, who coincidentally also happens to have a daughter named Josephine, was convicted of corruption by a Macau court last year. He spent a total of $77 million between both diamonds in Geneva this week, and has renamed the pink stone “Sweet Josephine.”

The incredibly rare gem was the cornerstone of the house’s annual Magnificent Jewels and Noble Jewels sale, estimated between $34-54 million, and managed not only to break one impressive record today, but three: a record price per carat (once again, for any diamond) was set for $4.43 million. “The Blue Moon” is also the first diamond to clock in at a per carat price of over $4 million. And, since the diamond is mounted as a ring, it has also set a new world record for any jewel. 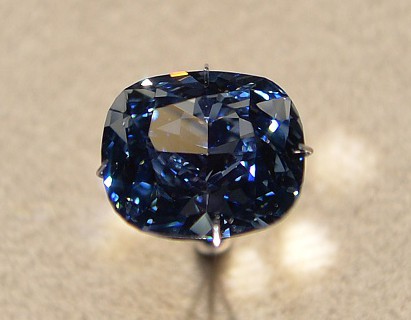