The darkest period in movie history, a time in the 1950s when good art was killed off by bad politics, comes to life again in Trumbo, the story of blacklisted screenwriter Dalton Trumbo, played with passion and grit by Bryan Cranston in a career-enhancing tour de force.

As a young, idealistic left-wing writer, Trumbo joined the Communist Party in 1938 without knowing the price he would pay for naïveté for the rest of his professional life. A big supporter of workers’ rights, he had already written such classics as Kitty Foyle and Thirty Seconds Over Tokyo before he fell under the shroud of political scrutiny in a postwar decade when America was nervous about finding a Communist under every bed, deceived and misinformed by alarmists like then-Senator Richard Nixon, who mistakenly preached the ignorant message that Communism was the enemy of democracy.

It wasn’t true. It wasn’t even illegal. But many artists were labeled dangerous radicals and forced to appear before the infamous House of Un-American Activities Committee headed by Sen. Joseph McCarthy. Sniffed out and ridiculed in print by phony, self-serving “patriots” such as gossip columnist Hedda Hopper, prominent creative figures such as Elia Kazan, John Garfield and Jerome Robbins (to name just a few), were strong-armed into naming their fellow writers, actors, directors and other talents of stage and screen under the disgraceful witch hunt known as the McCarthy era.

In the resulting hysteria, careers were destroyed, fortunes were lost, viable movie titans were rendered unemployable, the U.S. Constitution that guaranteed freedom of speech was defiled and lives were sacrificed on the pyre of hypocrisy. Trumbo was one of the unfriendly and defiant witnesses called the Hollywood Ten who were convicted of a ludicrous crime nobody ever heard of called “contempt of Congress” and sent to jail for refusing to rat on their friends. After serving an 11-month sentence, he was blacklisted by the movie studios and was only able to continue his profession writing secretly under various pseudonyms. (Nobody knew he was the real author of such Oscar-winning films as Roman Holiday and The Brave One, because other people accepted the awards for screenplays they didn’t write.)

John McNamara’s script, based on a biography by Bruce Cook and facts supplied by surviving members of the Trumbo family, chronicles the hardships and punishments endured by the writer until the grip of the blacklist was finally broken by Kirk Douglas, who restored Trumbo’s name and reputation, demanding he be given full screen credit for Spartacus in 1960.

The story is long-winded and the movie, directed with varying degrees of conviction by Jay Roach, is much too ponderous, but it does show how Trumbo’s intelligence and wit got him through the bleakest of times. In an actual speech near the end of the film, Trumbo warns future generations not to look for either Davids or Goliaths in the McCarthy era—only victims. But history provides a different outlook. Trumbo is now regarded as a hero broadsided by injustice. And with Helen Mirren as an idiotic Hedda Hopper, spouting empty rhetoric in flamboyantly silly hats, and clean-cut, square-jawed David James Elliott as a flag-waving John Wayne playing his enemies, who could judge otherwise?

Bryan Cranston brings the complex personality of Trumbo to life with substance and humor. Best scenes: Trumbo’s favorite writing positions—naked in the bathtub smoking cigars and typing scenes without getting the pages wet. Gorgeous, constantly evolving Diane Lane is wonderful as Trumbo’s loyal, understanding wife, and so are Elle Fanning as his daughter and John Goodman as B-movie huckster Frank King, who gave Trumbo odd jobs writing junk scripts during his days as a blacklisted pariah. The movie walks a fine line between the struggle of a compromised talent and the assault on First Amendment civil liberties by bogus politicians who vowed to uphold them. Hopefully, Trumbo will broaden the knowledge of young audiences today that remain ignorant about Hollywood’s darkest past. 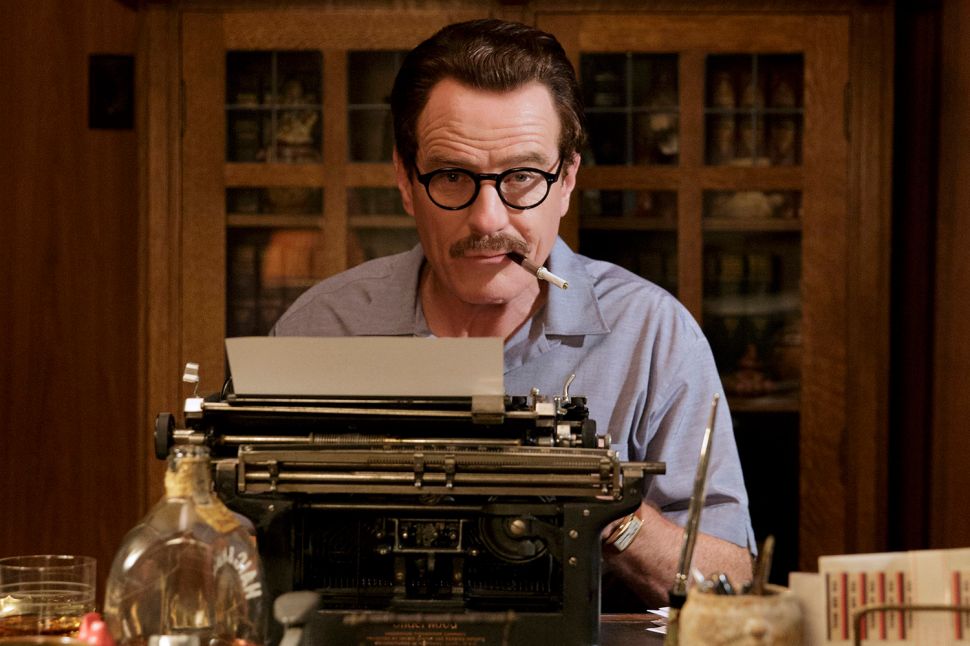