HOBOKEN – Standing on the corner of Park Avenue and Sixth Street, Assemblyman Carmelo Garcia (D-33) greets and shakes hands with every passerby who is willing. He runs up to cars to chat with voters who call that they are voting for him out of their windows. Today he is pursuing a new endeavor: becoming the councilman for Hoboken’s 6th Ward.

This Election Day will be make it or break it for Garcia. Come January his term as an assemblyman will come to an end (state Sen. Brian Stack (D-33) dropped Garcia from the line due to a still-pending lawsuit with Hoboken Mayor Dawn Zimmer). If he doesn’t win today, that will leave the once rising star of the Hudson Democratic Party out of politics.

But Garcia doesn’t think that will be a problem. He plans on winning.

“What I love most is that I know this is what I’m meant to do,” Garcia told PolitickerNJ. “This is one of those moments in life that is a defining moment.”

According to Garcia, his win would demonstrate the changing trajectory of Hoboken politics. Generally the city is thought to be divided between the new young professional subset of residents, and the long-time mostly Latino vote. Throughout his campaign, Garcia has been saying he can speak to both as a candidate. Today will prove whether that insistence is true or whether someone like his competitor incumbent Councilwoman Jen Giattino is still more favorable in the affluent ward.

Giattino is part of ‘Team Zimmer,” a slate of candidates supported by the Mayor. If Giattino lost in Ward 6 today, Zimmer would lose a powerful ally on the council. Because of the contentious nature of the relationship between Garcia and Zimmer—he once accused her of “ethnic cleansing” when he was fired from the Hoboken Housing Authority—the loss would be significant.

“Mayor Zimmer has never been working so hard in all her time as Mayor,” Garcia said. “When we win that is going to send a big message. This is going to prove that we as born-and-raised residents can galvanize the newcomer vote.” 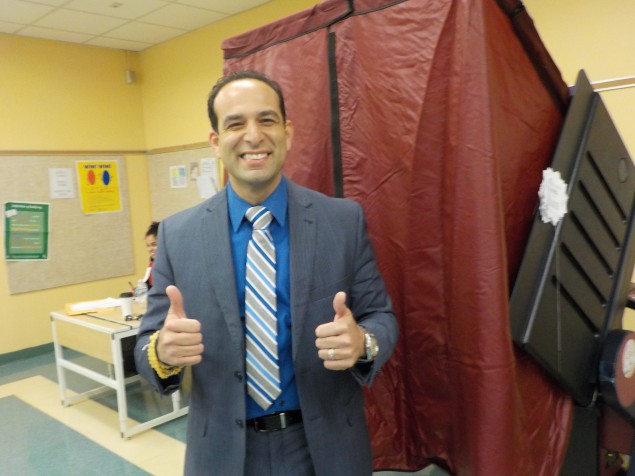