Gorgeously photographed, sensitively  written and directed, flawlessly acted, and deeply, intensely important, Carol is Todd Haynes’ most brilliant film since Far From Heaven and one of the triumphs of 2015.

At the center of this absorbing movie about the early struggles of the sexual liberation movement in the 1950s is a delicately nuanced performance by Cate Blanchett that cements and enhances her already unchallenged reputation as one of cinema’s most confident and exemplary artists. In the title role, she plays an elegant wife and mother who seems to the outside world the image of grace, beauty and patrician resolve that women with voguish clothes and unerring taste sipping martinis in long gloves and pageboy hairdos were expected to project in glossy ’50s ads hawking everything from filtered cigarettes to Packard convertibles.

But beneath the stylish and expensive look, Carol carries the heavy sadness and fear of a sexual identity crisis that was unwelcome in the constipated intolerance of the polite, postwar society of six decades ago when even the mention of the word “lesbian” provoked a cry for censorship. Already denounced by her estranged husband Harge (Kyle Chandler) for an old relationship with a woman she had known since they were childhood friends, Carol lives in a melancholy but pristine closet in the winter of 1952, terrified of any scandal that might jeopardize her cherished status with her adoring 5-year-old daughter.

Then, by chance, she browses through a New York department store swathed in mink during the Christmas holiday shopping rush, leaves her leather gloves behind on the counter and becomes intrigued by the young salesgirl named Therese (Rooney Mara) who thoughtfully returns them. An innocent lunch and a snowy getaway to Carol’s country house follow, and a casual mutual attraction blossoms into an uncontrollable affair, inciting the rage of Carol’s stuffy, soon-to-be-divorced husband, who threatens to sue his ex-wife for sole custody of their child to lure her back into their hopeless marriage to satisfy his wounded ego. But Carol pursues Therese with a subtle yet romantic tempo that is hypnotic.

Fate takes a right turn when Carol gives Therese, a poor but aspiring photographer, an expensive camera for Christmas. Inexperienced but infatuated with the older woman, Therese quits her job, leaves her boyfriend, and drives into the unknown with Carol during the Christmas holidays, opening her eyes and heart to a new world of sophisticated wit, Billie Holiday records, fine wine, and interludes in swanky hotel rooms like the Drake in Chicago. They get all the way to Iowa on New Year’s Eve before the affair is fully consummated, and then smashed by incriminating pictures of the two women by a private detective so the vindictive Harge can sue for sole custody on grounds of immoral conduct. Carol leaves a devastated Therese behind and flies home, crushed and defeated.

Carol doesn’t end there. A rancorous divorce is heightened by psychotherapy and leavened by rational and humane compromise, and time passes before the two women meet again. The ending eschews the filter-lens Technicolor Sturm und Drang of the kind of Douglas Sirk weepie that inspired Mr. Haynes’ Far From Heaven, but I dare anyone to remain indifferent or unmoved by the final scene.

Mr. Haynes is a director of enormous imagination and insight, so for a fragile narrative as exquisite and tender as Chantilly lace, Mr. Haynes fits the emotions to the period like the movements in a symphony. Based on Patricia Highsmith’s novel The Price of Salt, a suspenseful study of forbidden love and cruel bigotry set in a time of shifting social values, Phyllis Nagy’s intelligent screenplay fills in all the cracks in Carol’s armor, and the two leads are intimately, mysteriously well matched. Rooney Mara, restrained and touching, is a far cry from the danger and darkness of her Gothic role in The Girl with the Dragon Tattoo, and Cate Blanchett can convey a full-length biography with a furtive glance or a lowered eyelid. In something as simple as the way she lights a cigarette, you desperately want to know her—and Carol. Poignant and breathtaking, she has already won two Oscars. With her compelling radiance in Carol, don’t be surprised if her mantel soon hosts a trio. 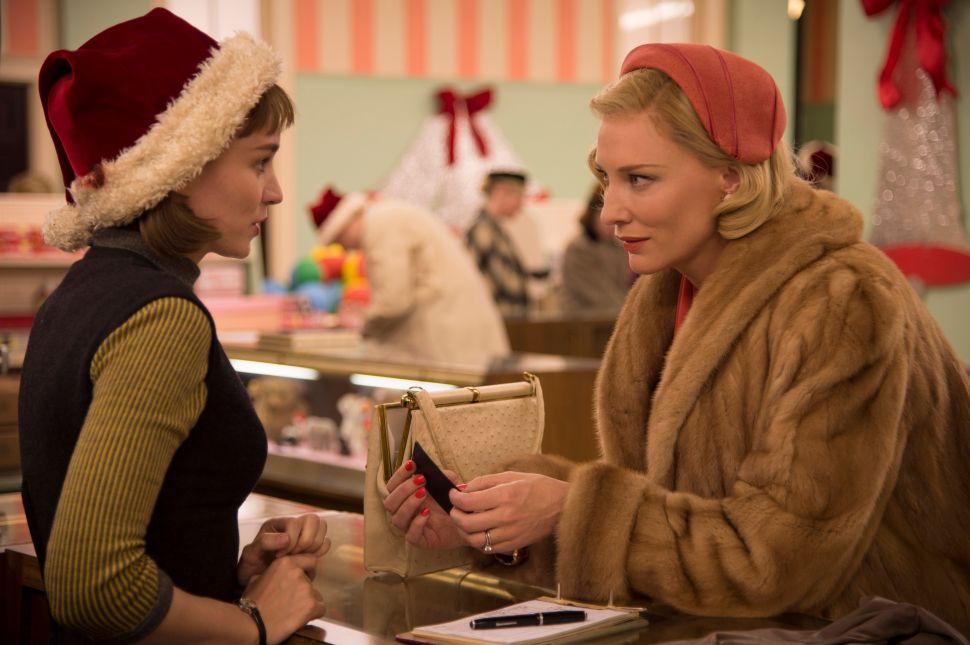