While tomorrow’s turkey dinner might leave you wishing you’d indulged a bit less, for the 1.4 million New Yorkers dealing with food insecurity, the holiday season brings on another, more difficult, set of stresses. City Harvest, an organization that collects and redistributes excess food to programs throughout New York, set out to address this issue on Thanksgiving eve. They teamed up with Bronx food pantry Give Them To Eat and gourmet recipe delivery service Blue Apron to bring more than 45,000 meals to deserving local families.

“This is a time of year when need is much more evident, so people are much more keen to donate,” Meg Davidson, Senior Manager of Agency Relations at City Harvest said of Wednesday’s event. Although pleased with the success of the Thanksgiving drive, Ms. Davidson was quick to point out that food insecurity is an issue which extends well beyond the holiday season. “Hunger doesn’t just happen in November,” she added, “unfortunately.”

The men and women visited by City Harvest’s fleet of tractor trailers on Wednesday will find themselves treated to a five-star organic feast. The three course menu includes Roasted Cornish Game Hen with Rosemary and Baguette Stuffing; Spiced Pork, Squash and White Bean Soup with Lacinato Kale and Sage-Walnut Pesto; and Cavatappi Mac & Cheese with Purple Top Turnip and Kale. Each box, which contains both ingredients and instructions for preparation, was donated by a fellow Blue Apron customer.

The world’s oldest food rescue organization, City Harvest will collect 55 million pounds of excess food in 2015 alone, sourcing high quality produce and packaged meals from restaurants, grocery stores and bakeries across New York. Give Them To Eat, the food pantry with which City Harvest has a longstanding relationship, will receive 2 million pounds of food from the organization by the start of 2016.

Wednesday’s action coincides with the release of the New York City Coalition Against Hunger’s annual survey. In a summary of their findings, the NYCCAH noted that 48 percent of food insecure adults between 15 and 65 in the city were employed. Echoing this point was Maria Vives, the director of Give Them To Eat.

“My message to everyone today is please ask your family members, ask your neighbors because sometimes there are people right next door to us and we don’t know that they’re going hungry,” Ms. Vives said.

For New Yorkers looking to help out for the upcoming holidays and beyond, both Ms. Vives and Ms. Davidson suggested volunteering.

“You can donate in food, in funds or in time,” Ms. Davidson quipped of the three easiest ways to get involved. You can reach out to City Harvest here, New York City Coalition Against Hunger here and locate your neighborhood food pantry here. 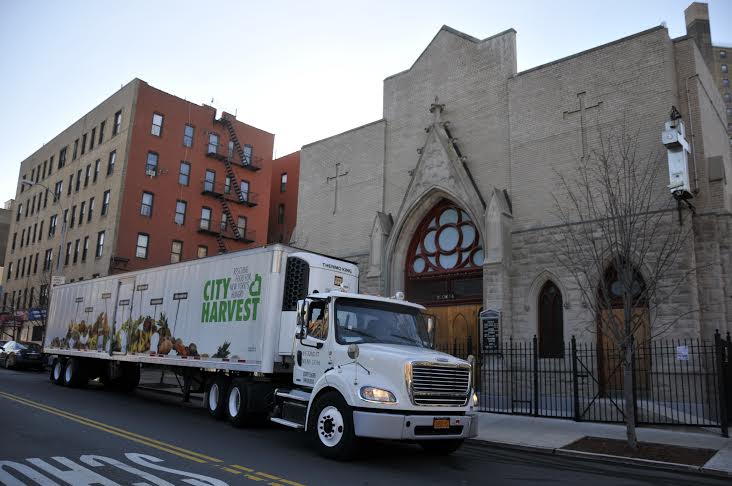