Bernie Sanders says he can’t be bought, but in fact you can now buy him for 21 cents—and if he ends up as the Democratic nominee, you’ll earn about a 500 percent profit.

That’s because the Commodity Futures Trading Commission (CFTC) has ostensibly given approval for PredictIt.org, a political derivatives market, to operate in the United States.

Think gas taxes will rise? Bet on it.

Believe the Department of Labor will adopt new overtime rules? Put your money where you mouth is.

In my recent Observer column on the proliferation of daily fantasy sports websites, I reported data from FanDuel that participating in such contests raised viewership of the sports users bet on by 44 percent. Arguably, a website like PredictIt.org could have a similar effect, prompting more people to participate in the democratic process.

The emergence of the innovative market could also solve another vexing problem: putrid punditry.

Not long ago conventional wisdom in Washington, D.C., was Vice President Joe Biden would vie for the Democratic nomination. It turned out to be the latest in a long line of bad predictions.

This followed the 2012 election cycle where a slate of pundits, despite evidence to the contrary, were so sure that Mitt Romney was going to win the presidency. 538.com’s Nate Silver ended up looking like a genius simply by following the data.

PredictIt offers the middle ground: a legal and liquid market that currently has more than 35,000 users who have engaged in more than 8 million trades so far.

But what if analysts had some financial skin in the game. What if they backed up their predictions with their money?

Now that PredictIt is operating in the United States, this is a real possibility.

PredictIt is the brainchild of John Aristotle Phillips, a longtime political technologist who founded his company Aristotle in the early 1980s. Phillips gained fame as the “A-Bomb kid” during his junior year at Princeton, after he designed a nuclear weapon as a class project.

While political derivatives markets are not new, PredictIt is the first that seems to get the formula right. The University of Iowa College of Business has operated the Iowa Electronic Markets for more than 20 years. This no frills, yet real money market is heavily limited in terms of the diversity of derivatives traders can invest in, sticking primarily to election results.

Intrade was a popular derivatives trading platform during the 2012 election cycle. That market, based in Ireland, operated at best in a gray area of U.S. law, and therefore it became somewhat difficult for American consumers to transfer funds to the site. Ultimately, citing “financial irregularities,” Intrade, for all intents and purposes, ceased operations in 2013.

PredictIt offers the middle ground: a legal and liquid market that currently has more than 35,000 users who have engaged in more than 8 million trades so far.

“We are thrilled by the actual volume of share trading and the liquidity,” Mr. Phillips tells the Observer. As more and more users join the site the market has become more reactive to movements in the news. For example, during the Republican debate, “when Carly Fiorina publicly grappled with Donald Trump…you could see the market move” according to Mr. Phillips. He also noted that one of the main benefits he sees to the site is “academic.”

PredictIt operates through Victoria University in New Zealand, which must vet each market added to the website. Additionally, the company is making anonymized data available to researchers who study predictive markets.

Mr. Phillips is a firm believer in the soothsaying ability of PredictIt, telling the Observer that “part of the magic of these prediction markets and markets in general” is that “they’re not 100 percent, but they’re pretty damn accurate.”

The only limitation on trading is a limit of an $850 investment on any given contract per user. This was laid out in a “No Action” letter secured by PredictIt from the CFTC. This permission slip from the regulatory agency essentially allows the site to operate in the United States without the risk to investors of being shut down by the federal government.

Who are the people who trade on PredictIt?

The company organized a happy hour in Washington, D.C. that brought together a motley crew of participants. “Some people were deeply involved in the Washington political sphere, some people not at all. They were doing this because it was fun,” said Mr. Phillips.

So what about insiders using privileged information to take advantage of these markets? According to Mr. Phillips, “There is no prohibition on insider information in this market. We don’t want to limit people with superior information. That is one of the reason these prediction markets are allegedly so accurate.”

But the $850 cap likely limits the odds of rigging the market, because, Mr. Phillips noted,  “You can’t have a Romney whale come in and try to tip the pricing.” He is referring to research conducted by David M. Rothschild of Microsoft and Rajiv Sethi, of Barnard College, which revealed that a single trader on Intrade “accounted for one-third of all bets placed on Romney during [an] observational window, and lost almost $4 million in the process.” That enthusiastic Romney supporter or deluded Fox News viewer blew as much as $4 million in 2012 by betting on the former Massachusetts governor.

So, while nobody will make or lose millions, perhaps this new tool can use markets to improve punditry.

I used myself as a guinea pig. On the radio three hours every day, I am forced to make any number of predictions. Would putting some skin in the game improve my performance?

I proclaimed I did not think Rep. Kevin McCarthy would be speaker and shorted this position on PredictIt. I said Joe Biden would not run for president and continued to insist on this position. As the market cratered, I continued to purchase more contracts.

When Scott Walker’s poll numbers began to tank, I bought a position saying he would be the first to drop out of the Republican field.

I also have bought some losers, including a position that the government would shut down in October. This was based on the belief that while I didn’t think we would go over the edge, there would at least be some drama with regard to the passage of appropriations bills spiking the price of these shares. With John Boehner’s retirement, this position became worthless.

While I will donate any proceeds from my trading to charity, I found that taking these positions caused me to sharpen the predictions I was making on air, especially when I was going against conventional wisdom.

With that in mind, here is my proposal—the Pundit’s Cup: a competition running from January 1, 2016 through Election Day. Every entrant deposits $850 in a PredictIt account. Entrants then purchase derivatives, publicly disclosing all trades on social media. After the election, the combined proceeds of all entrants would be totaled and the winner (whoever makes the most money) would pick their favorite charity to donate the pooled earnings to.

With even this tiny level of skin in the game, the prognostication game should get better.

But I may not buy the yes side of that derivative.

Ari Rabin-Havt is host of The Agenda on SiriusXM. He has served as an adviser to Senate Majority Leader Harry Reid, as well as Al Gore and John Kerry’s presidential campaigns. He is the author of the forthcoming book, Lies Incorporated: The World of Post-Truth Politics. 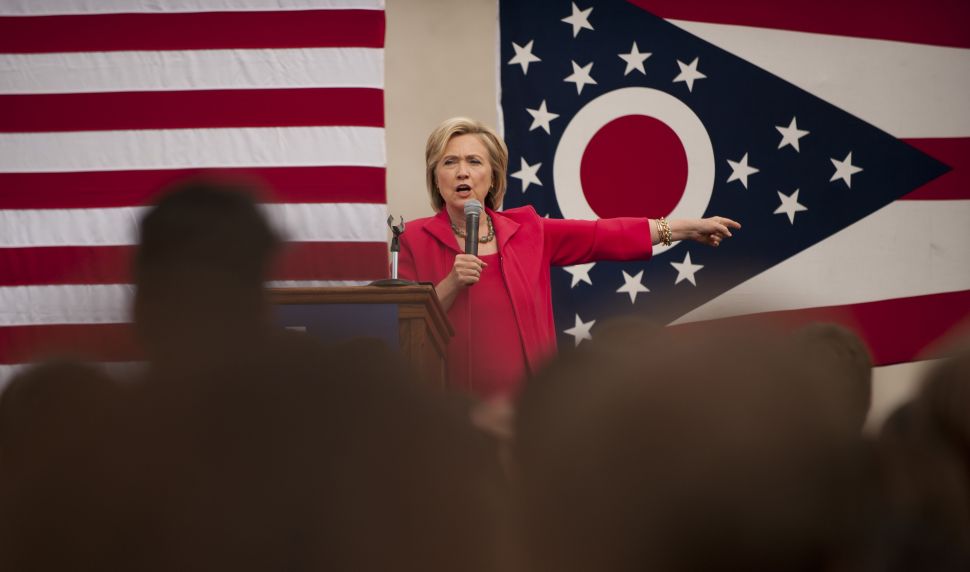