“You’re talking to the wrong guy if you think I’m going to be able to decipher the mayor’s politics,” Mr. Cuomo, who often extolls the benefits of bipartisanship, told the Observer after helping out at a food pantry in Brooklyn’s Bedford Stuyvesant neighborhood. “But I can tell you the Republican who I ran against, this is a man who is against a woman’s right to choose, this is a man who wants to lock refugees out of this country. It is not a person who I would want to stand next to.”

Mr. de Blasio, a liberal Democrat, and Mr. Astorino don’t have much in common politically—except that both men have clashed with Mr. Cuomo. Mr. Astorino is appearing with the mayor this afternoon at a bi-partisan press event to urge increased funding from the federal government for mass transit through a beefed up transportation bill.

Mr. Cuomo—who some Democrats have charged has been too cozy with Albany Republicans, many of them pro-life and anti-asylum—appeared in Brooklyn just hours after the mayor held a similar Thanksgiving photo-opp in the same neighborhood. The governor handed out food with Mr. Jeffries—another critic of Mr. de Blasio whose name is typically at the top of the list of potential Democratic challengers Mr. de Blasio could face in 2017.

Mr. Jeffries also questioned Mr. Astorino’s presence at the press conference, which is being attended by several members of Congress who, like Mr. Jeffries, will actually vote on the transportation bill, including Republican Congressman Daniel Donovan and Democrats Congresswoman Nydia Velazquez and Congressman Jerrold Nadler. Mr. Jeffries said it makes sense for the mayor to meet with members of the delegation on federal transportation issues.

“It doesn’t seem to make any sense to play footsie with Rob Astorino, as it relates to productively advancing this conversation,” Mr. Jeffries said.

Mr. Astorino, meanwhile, said this afternoon that his positions on other issues had nothing to do with his and Mr. de Blasio’s shared desire to keep regional transportation funding coming to the region.

“Mayor de Blasio and I are working together because it makes sense to work together, because we are in jeopardy of losing aid from the federal government that could absolutely hurt our transit system and our bus system here in New York and in Westchester,” Mr. Astorino said. “The governor should be here speaking about that as well.”

Mr. Cuomo—whom the mayor once deemed “vindictive”—said Mr. de Blasio’s appearance with his one-time electoral rival did not hurt his feelings.

“I gave up feelings a long time ago,” Mr. Cuomo said. “I don’t know that you can have feelings in this business.” 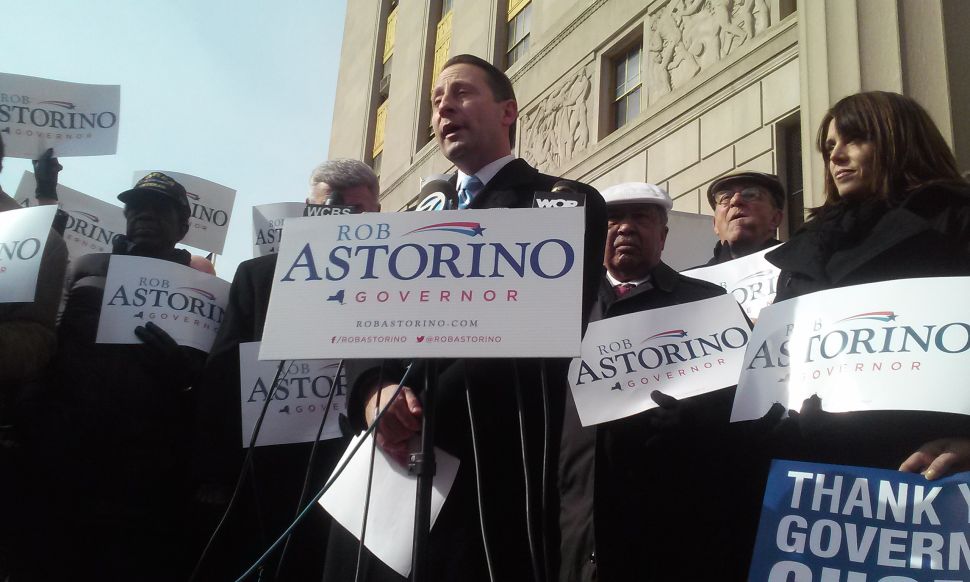