The two mayors agreed before the series that if the Kansas City Royals beat the New York Mets, Mr. de Blasio would send Junior’s cheesecake to the Kansas City mayor’s office. Mr. James confirmed on Twitter Friday that he had received the sweet treat:

They said "Say CHEESEcake!" But I said "CHAMPIONS!" instead. Thx @BilldeBlasio! Now about that song..? #SlyBlasioBet pic.twitter.com/tJNuOP8NMw

The second part of the bet required Mr. de Blasio to sing the Beatles’ “Kansas City” at a ballet school while wearing a Royals jersey. Mr. de Blasio tweeted a photo of his performance this afternoon, promising video later:

A bet's a bet, @MayorSlyJames. Will have video for you in a few hours. Can guarantee one thing: it's quite #Frosty! pic.twitter.com/JyKCj3hClr

If the Mets had won the World Series, Mr. de Blasio would have received Kansas City barbecue from Mr. James’ office. Mr. James would have also been forced to croon “New York, New York” at a Kansas City ballet school while wearing a Mets jersey. 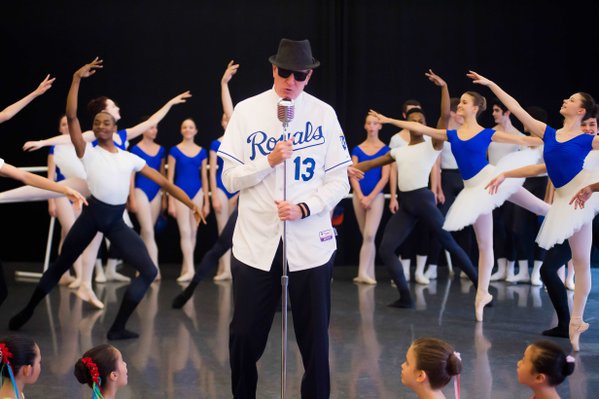